Expert calls for Victoria's hotel quarantine system to be SHUT DOWN

Victoria’s under-fire hotel quarantine system should be shut down until it is proven safe to function, one of Australia’s leading infectious disease experts has demanded.

Professor Lindsay Grayson is leading calls for the program to be halted after the entirety of Victoria was plunged into a strict five-day lockdown in response to a cluster of cases that emerged from the Melbourne Airport Holiday Inn.

He said Victoria’s system is placing the whole country at risk, even despite the state being forced to reboot the quarantine program after breaches led to a deadly second wave last winter that claimed 801 lives.

‘It’s sad to say this as a Victorian, but Victoria’s approach to quarantine appears to be placing the rest of the country at risk,’ Professor Grayson told The Age. 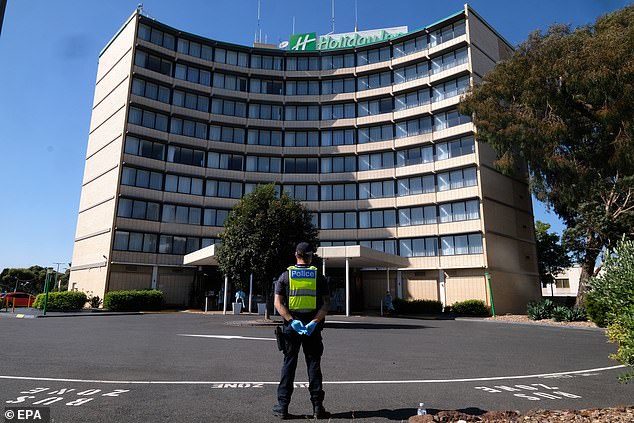 One of Australia’s leading infectious disease experts has called for Victoria’s hotel quarantine system to be shut down until it is proven safe (pictured, the Holiday Inn in Victoria where the most-recent outbreak took place) 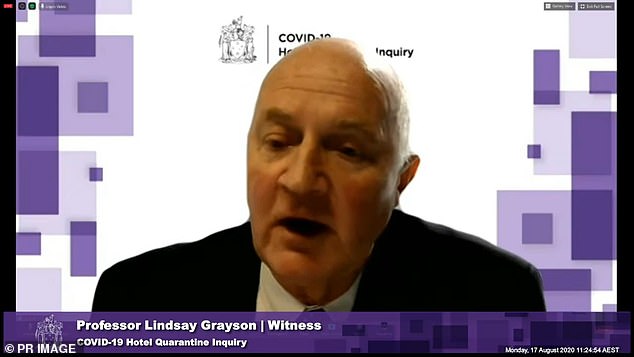 ‘It should be removed from the national quarantine program until proven safe.’

But he is concerned lessons have not been learnt from the inquiry and necessary standards have not been introduced, questioning why there had not been any breaches in facilities run by hospitals.

The inquiry had also recommended ‘every effort must be made to ensure that all personnel working at the facility are not working across multiple quarantine sites’.

However, workers and doctors across nine Victorian quarantine hotels, including the Melbourne Airport Holiday Inn, have reportedly breached that recommendation after being found to have moved between multiple hotels and offices.

The Age reported Healthcare Australia workers had lodged formal complaints with WorkSafe Victoria amid claims hotel operations managers and leaders of clinical teams went to a quarantine hotel on the same day they visited head office.

A Covid-19 Quarantine Victoria spokeswoman said a a ‘small group’ of workers move between offices and hotels but they have no interaction with guests and insisted nurses and doctors only work at one location.

Professor Grayson has also called for a national set of quarantine standards, along with the Australian Medical Association. 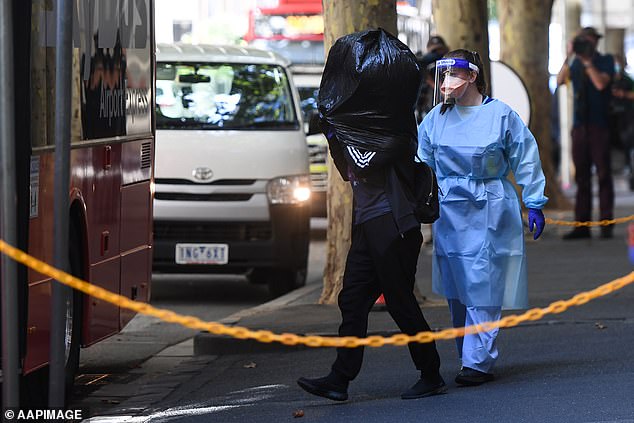 Victoria’s under fire hotel quarantine system was again in the spotlight on Tuesday after one of the hotels was evacuated while repairs to water damage were carried out (pictured, a returned Australian who was evacuated emerged wearing a large rubbish bag over their head)

AMA president Omar Khorshid meanwhile has questioned whether the Victorian Government has the capacity to deliver an effective quarantine program, and said it was ‘disappointing’ to see the state ‘fail’ again.

‘If the government can’t do this job then they need to find somebody who can, because it’s not rocket science,’ he said.

Dr Khorshid said he saw no reason why lessons learnt from around the world on how to protect people from the deadly virus were not being applied in Victoria.

International flights into Melbourne are currently suspended while the state grapples with its hotel quarantine issues with no date set for when they will return.

Premier Daniel Andrews on Tuesday confirmed plans for a purpose-built ‘quarantine centre’ as the government desperately tries to plug the leaks in its inner-city hotel programs.

Mr Andrews revealed a delegation of senior government officials will head to the Northern Territory to examine the Howard Springs quarantine facility as Victoria looks to emulate the model.

‘We are actively pursuing and examining the construction of a purpose-built quarantine centre, a centre that would serve to replace in at least significant measure – maybe not entirely but in significant part – the work of inner city hotels,’ he said. 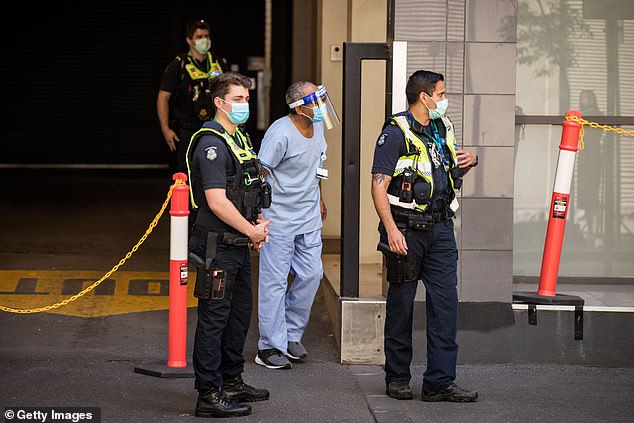 Victoria’s hotel quarantine system has been under fire after the entire state was again plunged into lockdown after Covid-19 leaked from a hotel (pictured, police outside the Holiday Inn Flinders Lane, which was evacuated Tuesday)

He said there were two ‘obvious candidates’ for the facilities at the moment, Avalon Airport and Melbourne Airport.

One Tuesday, Victoria’s hotel quarantine system descended into further farce after 31 returned travellers staying at the Holiday Inn in Flinders Lane, central Melbourne, were evacuated while water damage from a sprinkler system is repaired.

The facility had been used as a ‘hot hotel’, meaning it accommodates returned travellers who have tested positive for Covid-19 or are presenting with symptoms, as well as those with complex medical needs.