Face masks don’t work in the rain, experts warn as they call on ministers to tell the public that coverings need to be changed regularly

A wet face mask is less effective because water restricts airflow and cuts the amount of viral filtering, scientists have warned.

The World Health Organization says dry three-layer masks – the now-common blue surgical masks are the most recognisable of these – worn over the mouth and nose can protect people from catching coronavirus.

But a former senior WHO official has urged users to change their face covering if it gets wet because ‘moisture makes masks porous’, meaning ‘all types of mask are essentially vulnerable in damp weather’.

Professor Tim Spector, who runs the Covid-19 Symptom Study app, warned the Government that the public aren’t aware of the risks involved with a wet face mask, saying it would be ‘useful if clear advice was issued to the public’.

The warning comes as the UK heads deeper into the autumn, with rain showers and storms expected. The Met Office has forecast more ‘showery spells’ and periods of ‘prolonged rainfall’. 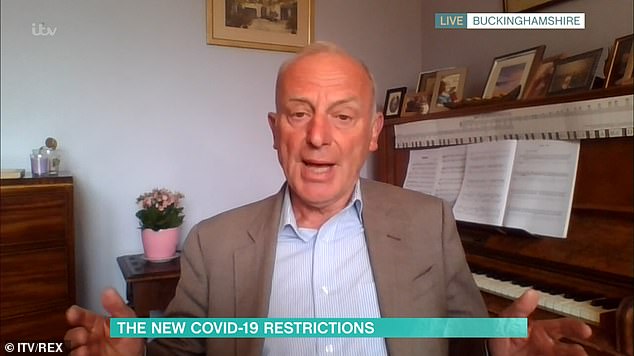 Professor Karol Sikora, a former chief of the World Health Organisation’s cancer programme, said moisture makes masks ‘porous’ and that they are ‘vulnerable’ in damp weather 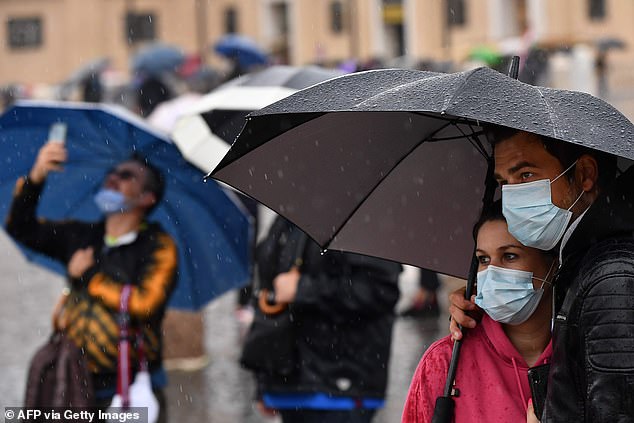 There are mounting fears that more people will end up wearing wet face masks as the seasons change, after they are caught in showers this autumn

Only three police forces in England fined people for not wearing face coverings in indoor public places during the coronavirus pandemic, a study found today.

British Transport Police are the leading force in issuing fines, having given out 51 fines after stopping 50,729 people between June 30 and September 8.

BTP have made 3,545 ‘interventions’ with passengers on public transport who were not wearing coverings approached by officers and asked to leave.

Face coverings were made compulsory in England on public transport on June 15, in shops on July 24 and a series of indoor locations on August 8.

The only other two forces enforcing fines against those breaking the rules have been Lancashire Constabulary with two and Lincolnshire Police with one.

With the fines standing at £100 for first offences, this means just £300 worth of fines have been issued by police forces excluding BTP, who patrol trains across Britain.

The findings came from a series of Freedom of Information requests sent to all 40 forces in England by London-based marketing agency Reboot Digital.

Separate figures issued by the National Police Chiefs Council last week suggested police have given out 61 fines for failing to wear a face covering on public transport, up from 38 up to the middle of August, while 28 were handed out for not using a mask in shops.

Karol Sikora, a former official in the WHO’s cancer programme, told The Times: ‘Moisture makes masks porous and because of this all types of mask are essentially vulnerable in damp weather.

‘I think the public generally lacks any knowledge or guidance on this issue. They should be given clear advice by the authorities, particularly given the current spell of heavy rain.

‘It is important that we know to change our masks if they become damp at all – higher-priced masks do not have different rules.’

The warning also applies to masks that have become wet due to moisture from breath.

The Nursing Times says these also suffer from an ‘increased resistance to airflow’ and are therefore ‘less efficient at filtering bacteria and has increased venting’.

Venting is when more air and droplets are expelled by the mask.

The WHO backs up his warning, stating online that all masks should be changed if ‘wet or visibly soiled’.

‘A wet mask should not be worn for an extended period of time,’ the body says. ‘Replace masks as soon as they become damp with a new clean, dry mask.’

Other scientists added their voices to calls for the Government to make the risks of wearing a wet mask clear to the public.

Professor Tim Spector, who runs the Covid-19 Symptom Study app, warned the Government that the public aren’t aware of the risks involved with a wet face mask.

‘It would now be useful if clear advice was issued to the public,’ he said. ‘Masks need to be changed regularly and this is particularly important to understand in damp and wet weather.’

Guidance published by the Department for Health and Social Care tells people to ‘change the face covering if it becomes damp or if you’ve touched it’.

Anecdotal evidence, however, suggests there is only limited awareness of this, with many not changing their masks during wet weather.

To combat this problem in France – where wearing a face mask outdoors is mandatory – people are encouraged to carry a second mask so they can perform a quick swap when it rains.

But the UK authorities are yet to urge Britons to do the same in order to curb the spread of the infection. 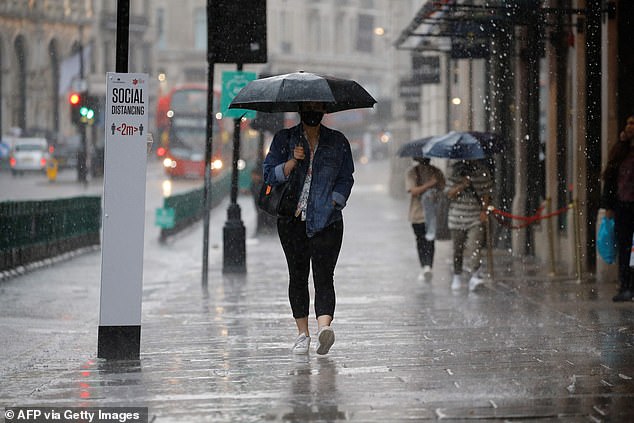 Face masks a re yet to be compulsory outside in the UK. But many people wear them outside as they move between shops