Some Falls Creek resorts have been evacuated due to a slow-moving landslide, as Victoria braces for torrential rain beginning on Wednesday, which could cause extensive flooding across the state.

A warning for Falls Creek and Bogong Village was issued on Tuesday because of a “slow-moving active landslide” on the Bogong High Plains Road above Bogong Village. 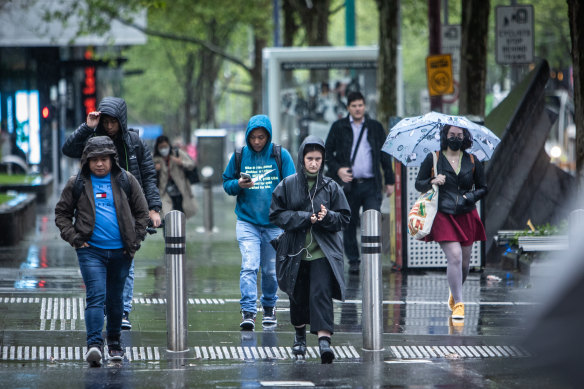 Charlie Sexton, from the State Emergency Service, confirmed on Wednesday that a road closure caused by the landslide meant residents at nearby ski lodges had been told to leave.

“Falls Creek Resort, for example, will be isolated by the road closure,” he said. “Accordingly, residents and visitors are being asked to leave by midday Wednesday or risk being isolated until after the weekend.”

Lisa Logan, who manages the Diana Alpine Lodge in Falls Creek, told radio station 3AW that she would be leaving on Wednesday morning, as only a single lane out of the area remained open. The other road out was closed due to snow.

Logan said rain was beginning to hit the alpine area, with the Bureau of Meteorology forecasting on Tuesday that parts of the Great Dividing Range and Victoria’s north could receive up to 100 millimetres.

“We can certainly see in the lowlands that the waters are already coming up in the rivers and [are] fast flowing with all the snow melt,” Logan said.

The morning rain band was moving in a south-easterly direction and began to hit the Latrobe Valley on Wednesday afternoon.

Weather bureau meteorologist Miriam Bradbury told 3AW that several lightning strikes had been reported in the state’s west and central north-west in Stawell and Bendigo.

On Tuesday, Premier Daniel Andrews declared “a significant rainfall event” would begin on Wednesday, peaking on Thursday and in the early hours of Friday morning.

Flash flooding is a risk in Melbourne on Thursday due to the rain, while already-swollen rivers are also in danger of bursting their banks, particularly as the rainfall makes its way downstream from Friday.

The bureau’s latest severe weather warning update on Wednesday morning said 24-hour rainfall totals on Thursday were expected to reach between 50 and 80 millimetres, with isolated totals possibly more than 120 millimetres over higher terrain.

Flood warnings are currently in place for the Loddon, Avoca, Kiewa, Snowy and Goulburn rivers in the state’s north-west, north and east.

Authorities also said on Tuesday they were concerned about the Campaspe, King, Ovens, Wimmera and Broken rivers.

The bureau said the greatest risk to Melbourne was in the late afternoon to evening on Thursday.

At a separate press conference on Wednesday morning, the premier reiterated the warnings of the forecasters and emergency services.

“Please be aware of your circumstances, please get the best information, so you can make the very best decisions for your safety and the safety of others,” Andrews said.

“And please, please do not drive into floodwater because it’s dangerous for you and it’s really dangerous for the person who has to come and rescue you.”

Emergency Management Victoria deputy commissioner Chris Stephenson told Victorians in flood-risk areas on Tuesday: “You need to make sure that you are prepared for up to 72 hours of potential isolation.”

Several dams in alpine areas east of Melbourne are also at risk of spilling over after the heavy rainfall arrives.

Tim Wiebusch from the SES said on Tuesday the Dartmouth dam recently spilt for the first time in 26 years, while Lake Eildon and the Thomson Dam could also overflow in coming days.