Ukraine mourns its dead: Families shed tears at funerals for fallen soldiers killed on the frontlines by Putin’s invading forces

Harrowing photos have emerged from the funerals of a pair of Ukrainian soldiers killed in bloody fighting against Putin’s troops on the eastern front.

Inconsolable friends and family members were pictured breaking down beside the coffins of First Lieutenant Mikita Gapic and Lieutenant Andrey Basikov, both of whom were killed earlier this week in fighting near Ukraine’s second city Kharkiv, just 30 miles from the Russian border.

Their visceral outpouring of grief brings into stark focus the loss experienced by thousands of Ukrainian families since Russian tanks rolled across the border on February 24, as the body count on both sides continues to climb amid brutal trench warfare and close quarter combat in and around Kharkiv, Izyum, Severodonetsk and scores of other urban centres in the Donbas.

Funeral proceedings saw dozens of people gather around the open caskets in which Gapic and Basikov were later laid to rest.

Grieving funeralgoers knelt beside the lifeless husks of their loved ones, laying colourful wreaths on their chests alongside framed photos and trinkets destined to accompany their bodies underground.

The proceedings in Kharkiv took place just one day after hundreds turned out for the Kyiv-based funeral of a prominent civic and environmental activist who like tens of thousands of his countrymen took up arms against the Russian invaders and died defending the sovereignty of his homeland. 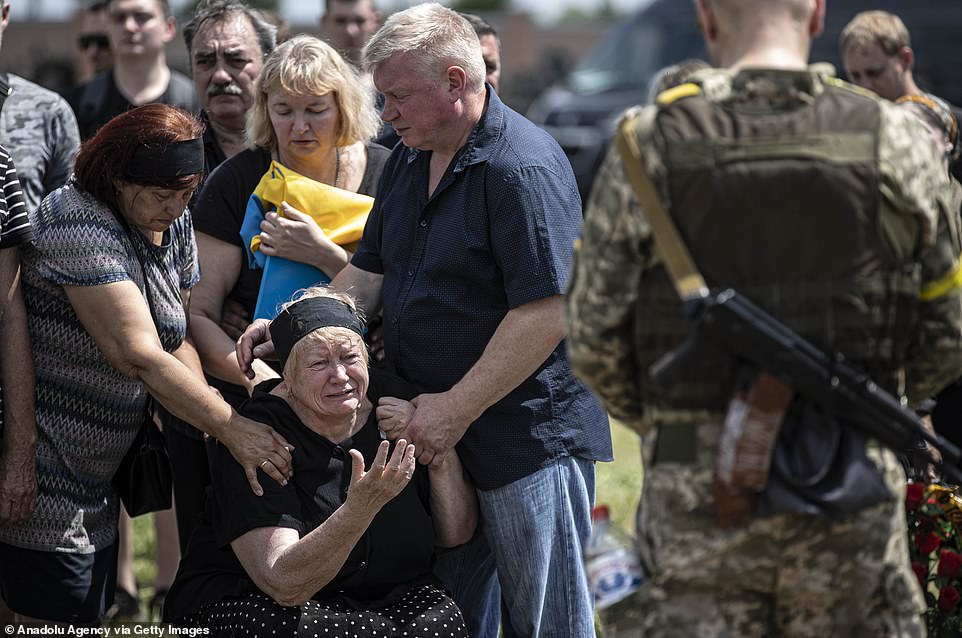 Grieving family members are pictured at the funerals of First Lieutenant Mikita Gapic and Lieutenant Andrey Basikov who lost their lives on the front line, as Russian attacks continue, at the Military part of Cemetery 18 in Kharkiv, Ukraine on June 19, 2022 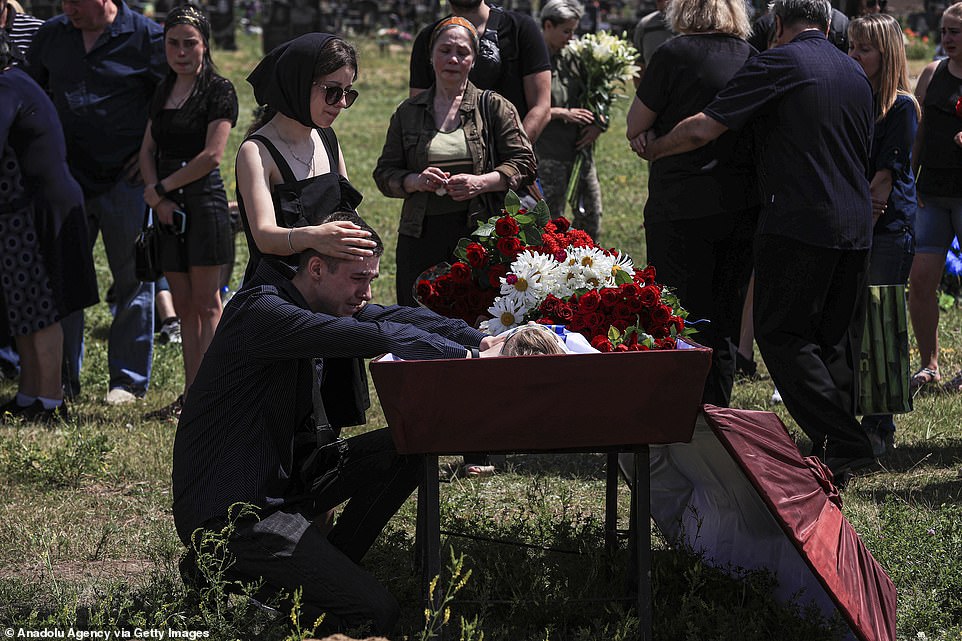 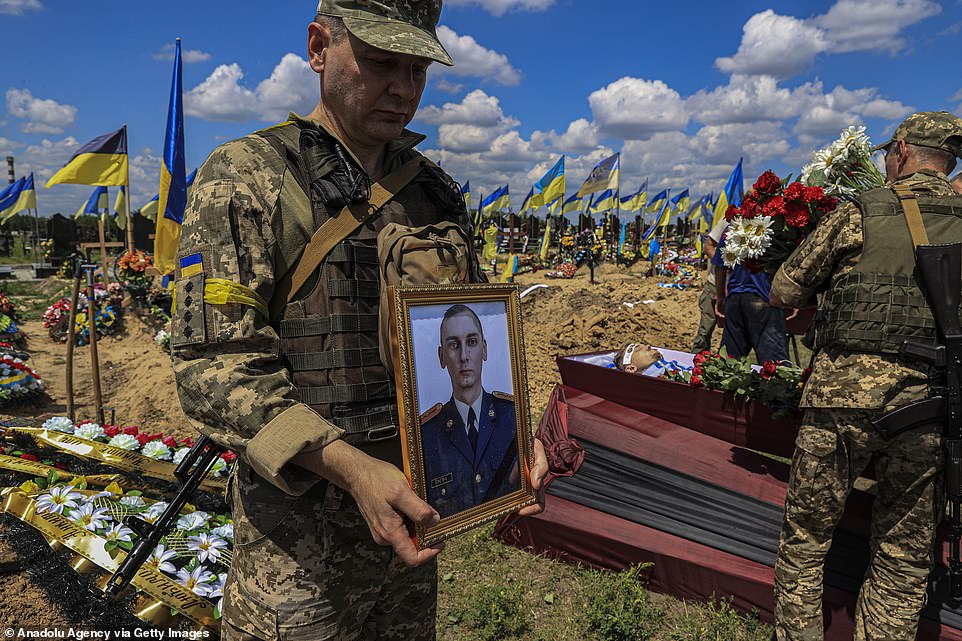 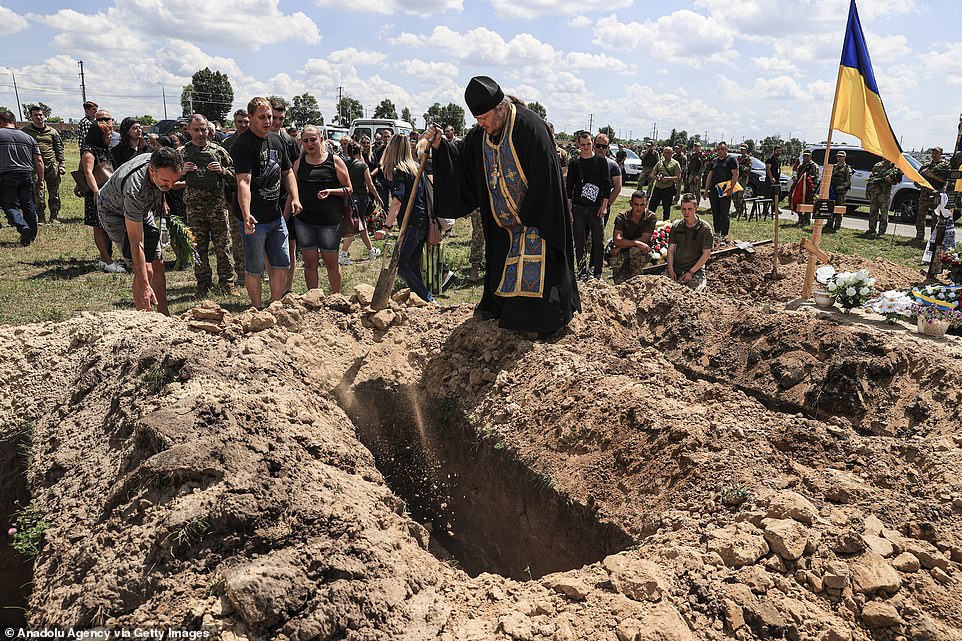 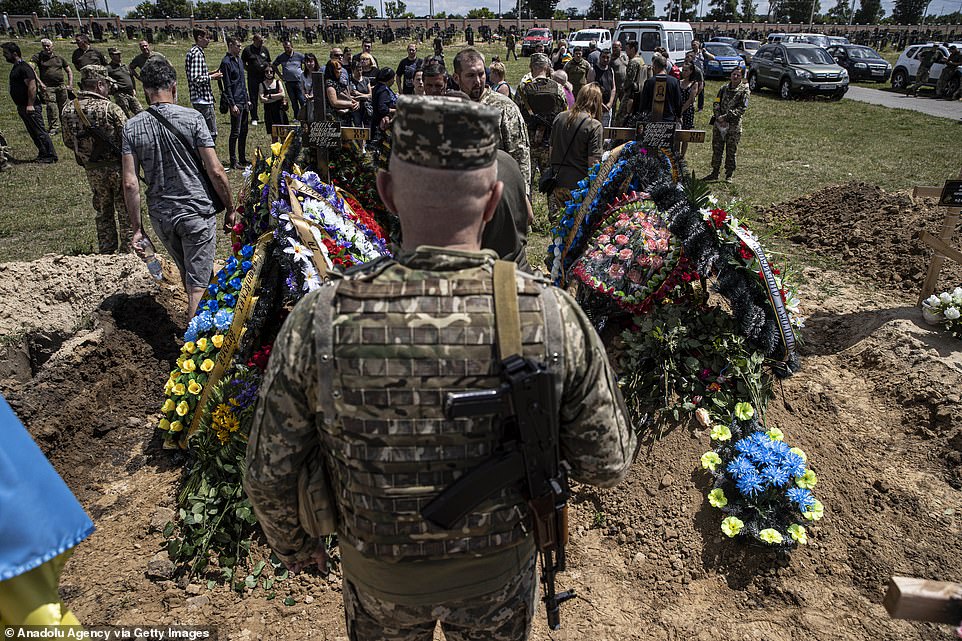 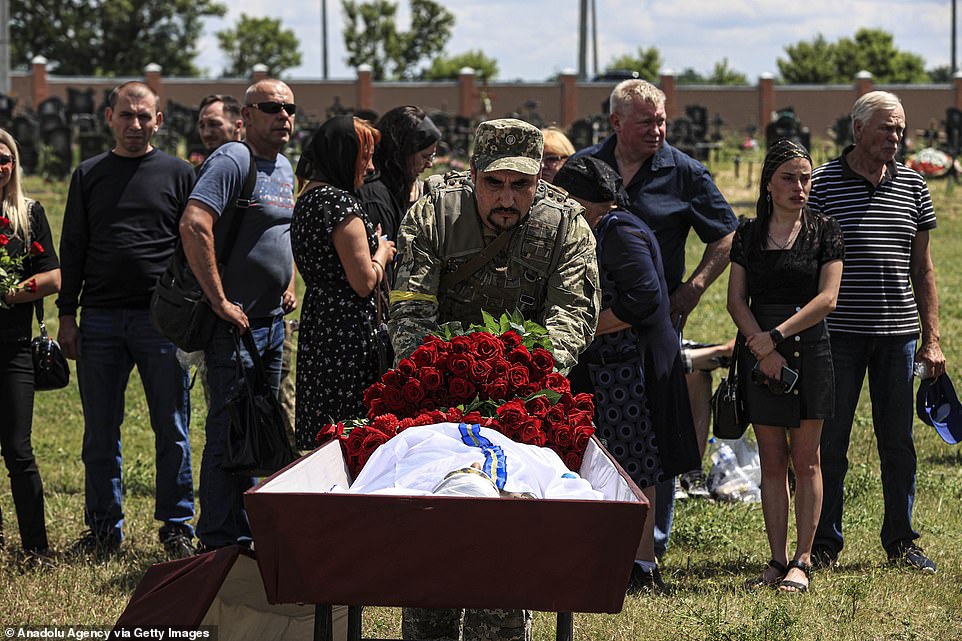 The hundreds of mourners for Roman Ratushny, 24, included friends who had protested with him during months of demonstrations that toppled Ukraine’s pro-Russia leader in 2014.

The arc of his shortened life symbolised that of Ukraine’s post-independence generations that are sacrificing their best years to defend their freedom.

‘Heroes never die!’ friends, family and admirers shouted in Ukrainian as Ratushny’s coffin was loaded aboard a hearse on a square in the Ukrainian capital now littered with destroyed Russian tanks and vehicles. Their charred hulks contrasted with the shiny gold domes of an adjacent cathedral where priests had earlier sung prayers for Ratushny, who was a prominent activist in Kyiv.

From the square, the mourners then walked in a long silent column behind his coffin to Maidan Nezalezhnosti, or ‘Independence Square’. The vast plaza in central Kyiv gave its name to the three months of protests that overthrew then President Viktor Yanukovych in 2014 and which helped fuel the political and patriotic awakening of Ukrainians born after independence in 1991.

Ratushny had ‘a heart full of love for Ukraine,’ said Misha Reva, who traveled overnight in his soldier’s uniform from front lines in the east to say goodbye to the friend he met for the first time on Maidan, in the midst of the protests.

Ratushny was then just 16; Reva was in his early 20s. It was Ratushny who introduced Reva to the woman who is now his wife, also on the square.

In Kyiv, the bells of St. Michael’s cathedral tolled as four soldiers carried Ratushny’s coffin to the memorial service Saturday morning, held outdoors in the church’s sunlit courtyard. Poppies and a traditional loaf of bread were placed on the coffin covered with Ukraine´s blue and yellow flag.

During the Maidan protests, where riot police used batons and eventually bullets with deadly abandon, Ratushny and Reva had taken shelter together for one night inside the cathedral grounds, the friend recalled.

‘He was such a solid and big personality,’ Reva said. ‘It’s a great loss for Ukraine.’ 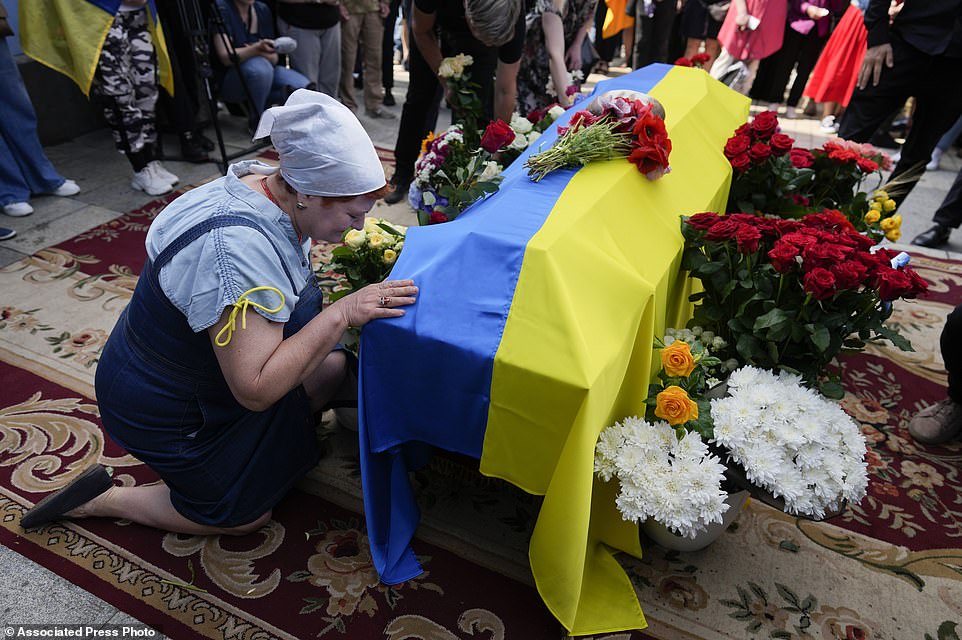 A woman kneels at activist and soldier Roman Ratushny’s coffin during his memorial service in Kyiv, Ukraine, Saturday, June 18, 2022. Ratushny died in a battle near Izyum, where Russian and Ukrainian troops are fighting for control of the area 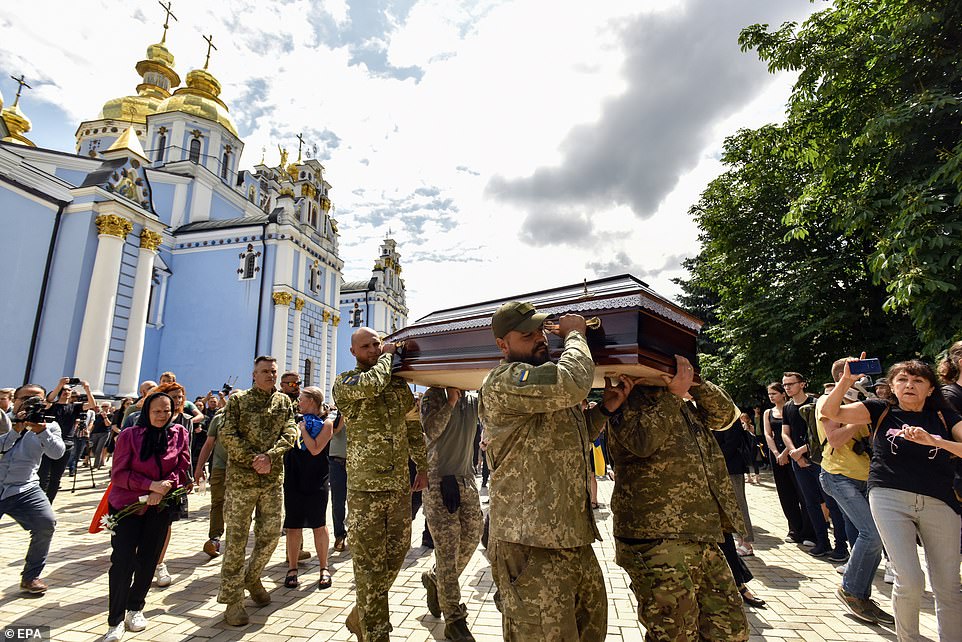 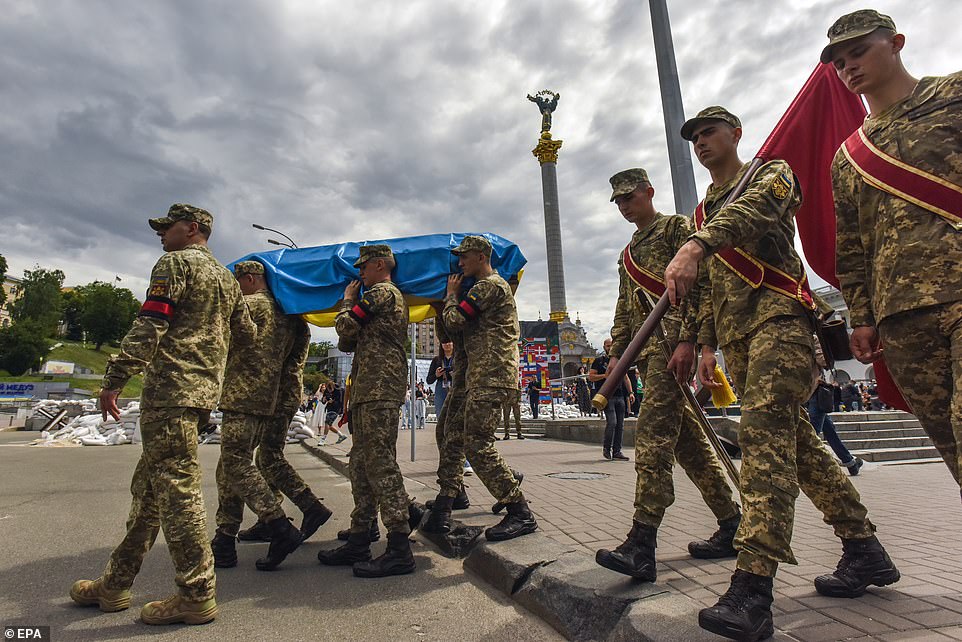 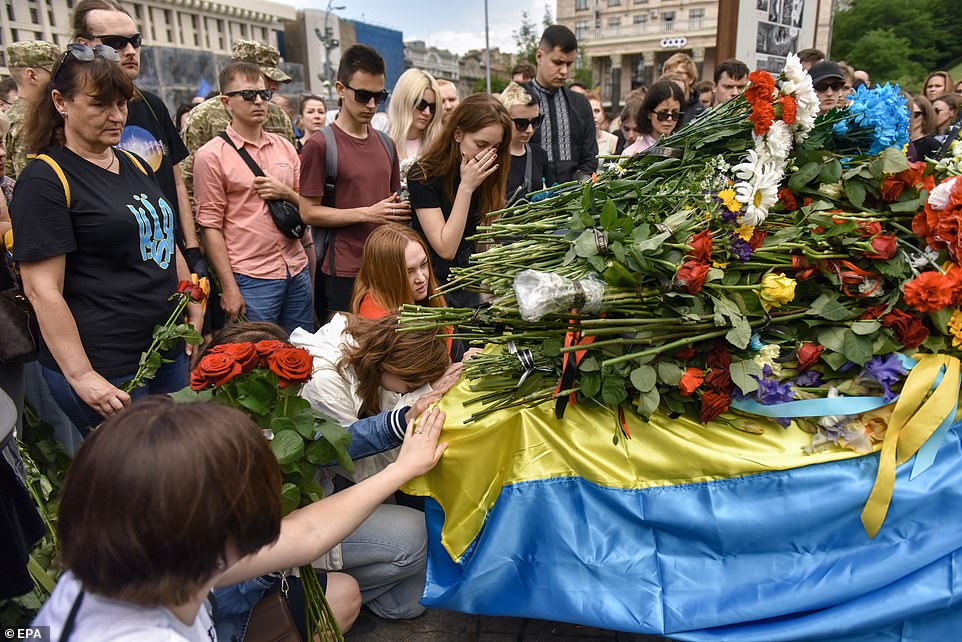 Relatives, friends and other mourners attend the funeral ceremony of Ukrainian serviceman and activist Roman Ratushny at Maidan Nezhalezhnosti Square 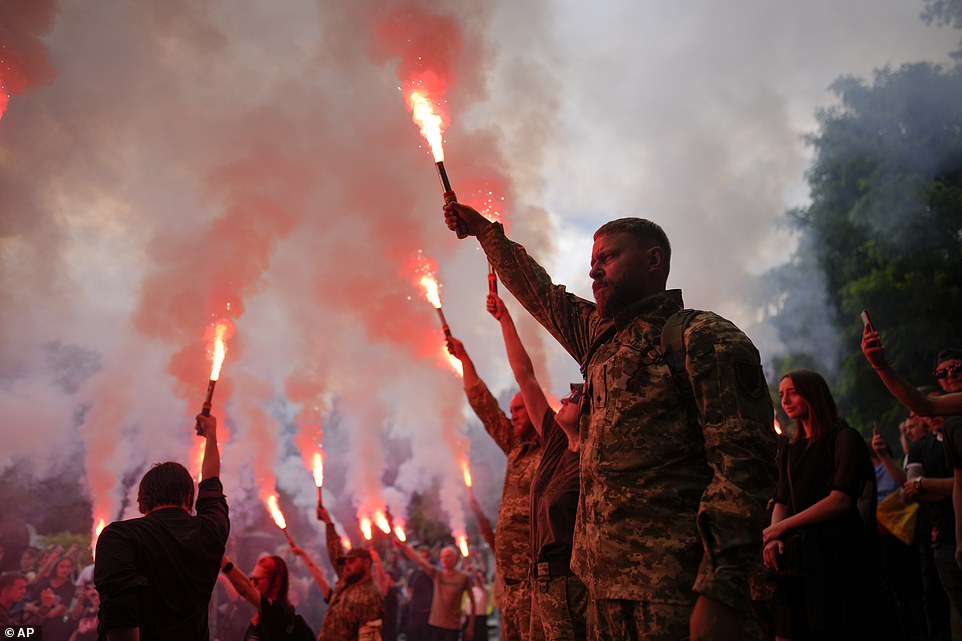 Soldiers hold flares as they attend the funeral of activist and soldier Roman Ratushny in Kyiv, Ukraine, Saturday, June 18, 2022 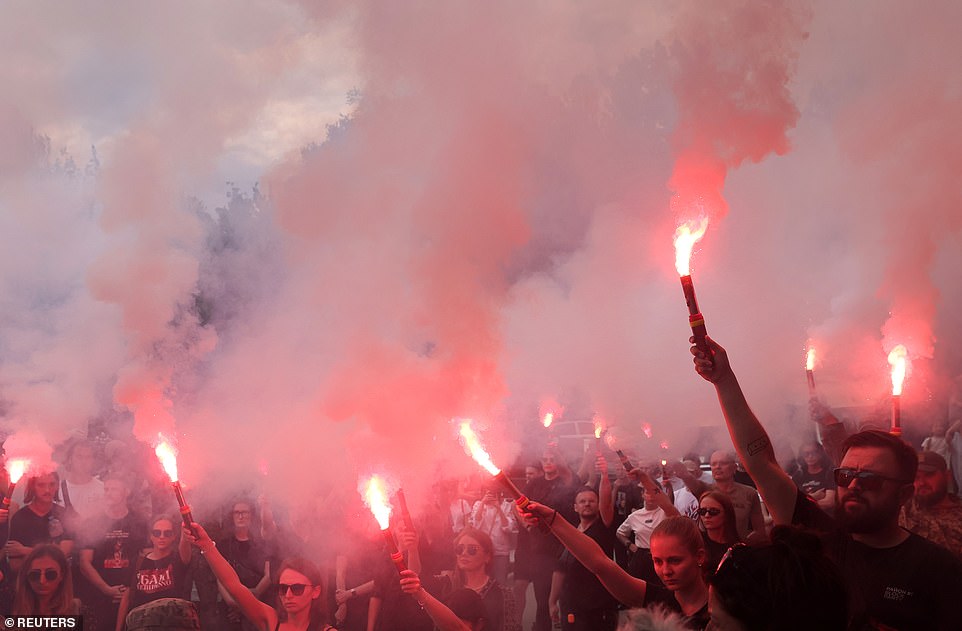 Friends, family, fellow soldiers and others honor soldier Roman Ratushny, a well-known activist, during his burial service in Kyiv, Ukraine

The friends then signed up to fight on the very first day of the Russian invasion on Feb. 24. After taking part in the defense of Kyiv in the assault’s opening weeks, Ratushny then joined an army brigade, doing military intelligence work, Reva said. Reva said he’s been fighting of late in positions away from where Ratushny was killed. Reva, 33, said two soldiers were killed and 15 wounded Thursday where he’s been stationed.

‘People get killed every day on the front line,’ he said.

Ratushny was killed on June 9 around the town of Izyum on the war’s eastern front, according to the environmental campaign group that he led in Kyiv. He fought for the preservation from development of a wooded park where people ski in winter.

‘He was a symbol, a symbol of a new Ukraine, of freedom and a new generation that wants to fight for its rights,’ said Serhli Sasyn, 21, before adding: ‘The best people are dying now.’

The funerals of Gapic, Basikov and Ratushny come as NATO’s chief warned that the war in Ukraine could last ‘for years’, while President Volodymyr Zelensky vowed his forces would not give up the south of the country to Russia after he visited the frontline there. 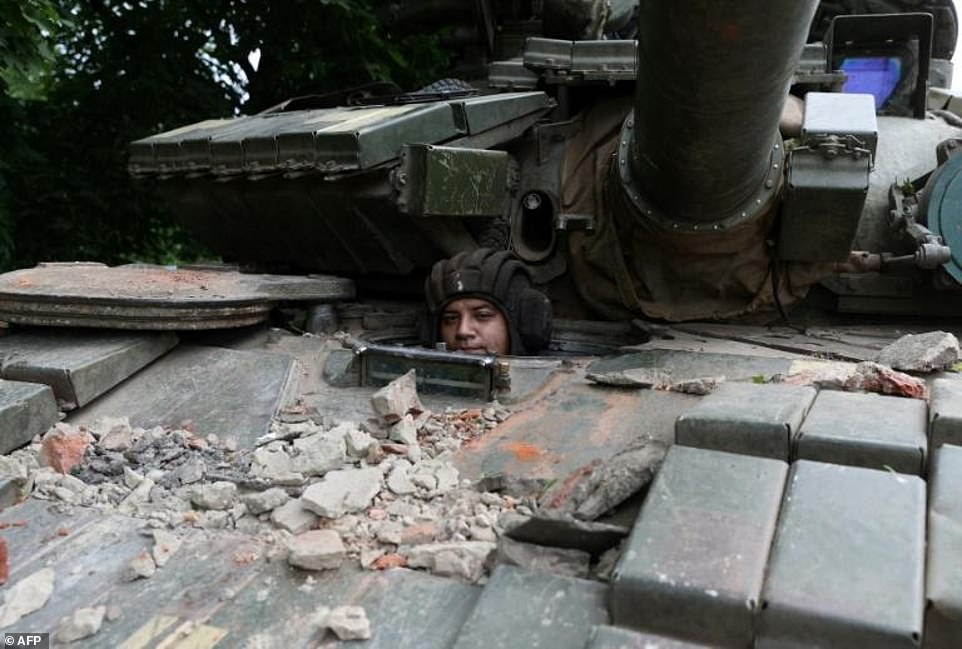 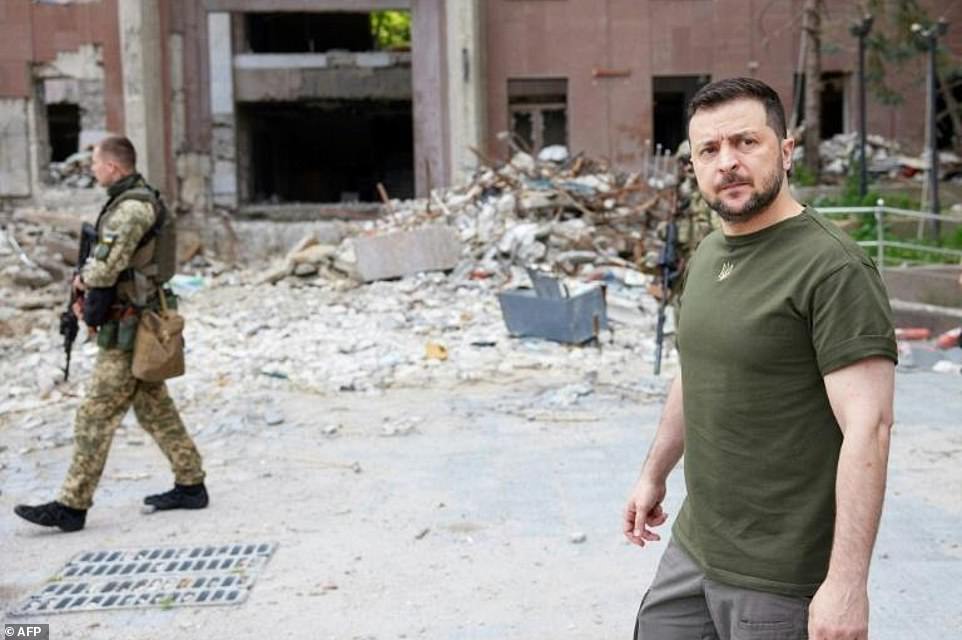 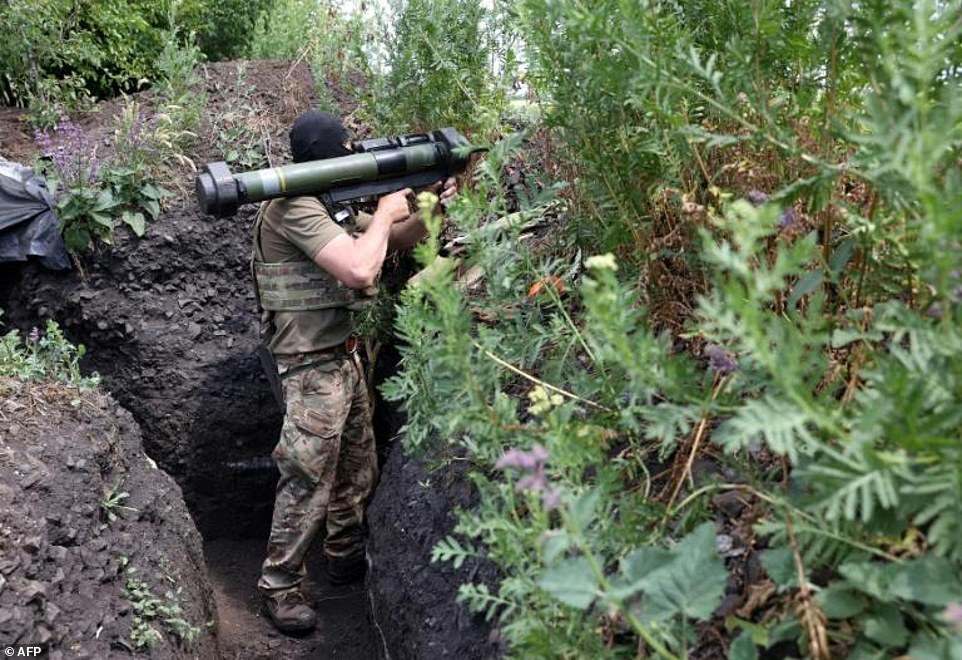 Ukraine has repeatedly urged Western countries to step up their deliveries of arms since the February 24 invasion, despite Russian warnings that it could trigger wider conflict

Ukraine said it had also repulsed fresh attacks by Russian forces on the eastern front, rocked by weeks of fierce battles as Moscow tries to seize the industrial Donbas region.

‘We must be prepared for this to last for years,’ Stoltenberg told German daily newspaper Bild.

‘We must not weaken in our support of Ukraine, even if the costs are high – not only in terms of military support but also because of rising energy and food prices.’

‘Time is now the vital factor,’ Johnson wrote in an article for the Sunday Times after making his second visit to Kyiv, calling for the West to ensure Ukraine has the ‘strategic endurance to survive and eventually prevail’.