Fatima is reunited with her husband after he escapes Kabul

Fatima Alizada had feared the worst for her husband at the hands of the Taliban after he survived a deadly bomb explosion outside Kabul airport in Afghanistan.

After a number of aborted attempts to escape, her husband Mohammad made it to Sydney on October 12 after leaving from Pakistan. The couple were reunited on October 25 after Mohammad spent two weeks in hotel quarantine. They are now living with Fatima’s parents in western Sydney.

“I feel relieved,” Fatima said. “I am so happy. I won’t have to worry any more. It was so difficult.

“He had some trauma after the explosion happened at Kabul airport. He had nightmares, but he is okay now.” 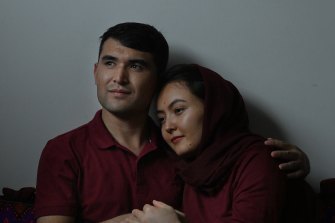 Fatima Alizada is reunited with her husband Mohammad at her home in western Sydney after he escaped from Afghanistan. Credit:Kate Geraghty

In late August, Fatima told the Herald she feared she would never see her husband again after his attempts to escape were violently aborted. On one occasion the Taliban struck him with an iron pole. On another he was forced to return home after a deadly explosion outside the airport. It had been more than a year since the couple last saw each other in Afghanistan. The couple is part of the Hazara religious minority the Taliban has persecuted.

They met as children in Afghanistan and married after Fatima moved to Australia with her family. They had been waiting for more than two years for the Department of Foreign Affairs to process the husband’s spouse visa application. After Kabul fell to the Taliban in August they felt desperate that their time was running out.

Mohammad said he was “so happy” to see his wife again and to be living safely with her in Australia.

“I’m feeling very good. Fantastic,” he said. “Now I am so happy to be with Fatima.

“When I went to the airport that was a bad time after the explosion happened and the Australian military left Kabul airport.”

Mohammad, 25, has a job as a labourer and hopes to get his qualifications as an engineer recognised in Australia. Fatima, 22, is doing the HSC this year and hopes to study a business course at university in 2022.

Afghan Australian lawyer and human rights advocate Mariam Veiszadeh said she was heartened that the young couple had been reunited. She has been working with the Australian Afghanistan Advocacy Network to help others escape since the Taliban overran Kabul. 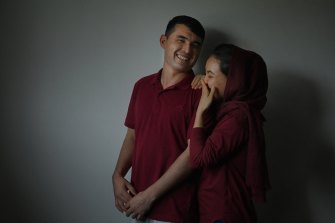 “It’s so good to hear some incredible heartwarming news amongst what I’ve otherwise been hearing in recent weeks – endless pleas for help from minority ethnic communities unable to flee Kabul,” she said.

The network is calling on the federal government to increase its humanitarian intake from Afghanistan.

“There’s still been no solid commitment and 11 weeks have passed since Kabul fell,” Ms Veiszadeh said.

Nearly 60 NSW MPs representing the Labor Party, Coalition, Greens, Christian Democratic Party and other crossbench members have signed a petition urging the federal government to boost its refugee intake from Afghanistan. The petition says that while Australia’s willingness to take in at least 3000 Afghan refugees was welcome, “it falls well short” of the commitments made by other countries including Canada and Britain, which have each committed to resettle 20,000 refugees.

NSW Multiculturalism Minister Natalie Ward, who has lobbied the federal government to increase its intake said NSW has so far provided safe refuge for almost 900 evacuees from Afghanistan in the past seven weeks.

Sydney migration lawyer Anna Ryburn said Mohammad was one of 15 of her Afghan clients who had so far arrived in Australia. Another 50 were hopeful of following him.

Fatima, her, Hu, is, Reunited, with
World News