Kentucky prosecutors on Tuesday dropped felony riot charges against a state lawmaker and others who were arrested last month during protests over the lack of charges against police officers connected to the death of Breonna Taylor.

Citing a lack of evidence, Jefferson County Attorney Mike O'Connell dropped the charges against state Rep. Attica Scott during an arraignment, the Louisville Journal-Courier reported. He said he would not pursue charges against her and 17 others who were arrested Sept. 24, including Scott's daughter, Ashanti Scott, and Shameka Parrish-Wright, a racial justice activist.

"While in these cases we do have evidence of property damage to some TARC buses and the Library, we would need clear-cut evidence that these individuals before you today were working with those who committed that property damage," O'Connell said, according to the newspaper. "The evidence we have reviewed thus far does not support that."

Scott was detained by Louisville police officers as she was trying to cross a street to get to the First Unitarian Church shortly before the city's 9 p.m. curfew went into effect. The church had given sanctuary to protesters in an effort to shield them from arrest.

She was charged with first-degree rioting, a felony, as well as misdemeanor failure to disperse and unlawful assembly. Her attorney entered a not guilty plea for the remaining charges, according to local media reports.

A crowd gathered outside the Hall of Justice in Louisville in a show of support, according to videos posted to social media.

Scott was accused of being part of a group that caused damage at multiple locations, including the Louisville Public Library. However, video footage recorded that night did not show her engaging in criminal acts.

Messages and calls to Scott and O'Connell from Fox News were not returned.

The night of her arrest, hundreds gathered in downtown Louisville to voice disappointment in the days after a grand jury's decision to indict just one officer involved in Taylor's March 13 death. That officer, who has since been fired, was charged with three counts of wanton endangerment for firing a bullet that traveled into an adjacent apartment. 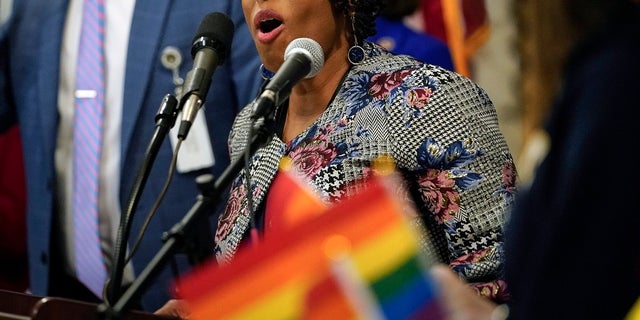 Kentucky state Rep. Attica Scott speaks at a rally held by Fairness Campaign to advance LGTBQ rights in February in the Rotunda at the State Capitol in Frankfort, Ky. Scott was arrested and charged Sept. 24 with first-degree rioting, a felony, and two misdemeanor counts: unlawful assembly and failure to disperse. Prosecutors on Tuesday dropped the rioting charge. (AP Photo/Bryan Woolston, File)

No officers were charged directly in her shooting death.

In response to the killing, Scott authored "Breonna's Law," which would end no-knock warrants like the one executed on Taylor's apartment the night she died.

State prosecutors have faced intense criticism over the way Taylor's case has been handled. A second grand juror recently approached a local nonprofit for legal advice on how to speak freely about deliberations, Fox News has learned.

Christopher 2X, the executive director of Game Changers, a nonprofit that uses education to reduce gun violence, told Fox News the juror will wait until after a hearing for another unidentified grand juror who filed a motion to speak publicly about the case and for the release of recordings and transcripts.

"It is as unique as can be," Christopher 2X told Fox News. "This is unprecedented for a grand juror or jurors to want to break their oath."