An Argentinian judge has been caught on prison CCTV kissing a convicted cop-killer who she tried to save from a life sentence.

Mariel Suarez, a judge in southern Chubut province, was filmed kissing Cristian ‘Mai’ Bustos in jail near the city of Trelew on the afternoon of December 29.

Just a week earlier, Suarez had sat on a panel of judges deciding whether Bustos should be given life in jail for killing officer Leandro ‘Tito’ Roberts back in 2009. 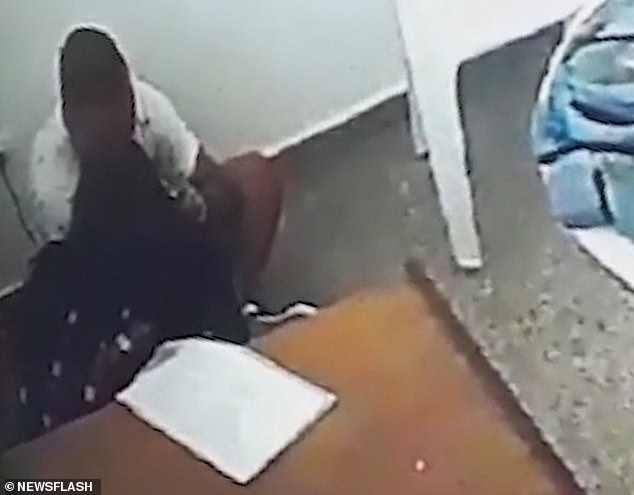 Mariel Suarez, a female judge from Argentina, is under investigation after she was filmed kissing cop killer Cristian ‘Mai’ Bustos while visiting him in prison (pictured)

Suarez was the only judge on the panel to vote against the life sentence, despite being told that Bustos was a ‘highly dangerous prisoner’.

Her dissent was not enough to save Bustos, who was sentenced to a whole-life term which he began last week.

Now Suarez is also under investigation by the Superior Court of Chubut for ‘inadequate behaviour’, and is facing possible sanctions.

Bustos was jailed over the 2009 killing in nearby Corcovado of police officer Leandro Roberts, who was fatally shot while going to arrest Bustos for an earlier prison break.

A brother of the convicted man also died in the gunfight, and a second police officer was wounded.

Bustos was convicted of homicide and given a life sentence after admitting his guilt during a trial.

The Superior Court of Chubut said in a statement: ‘The judge allegedly incurred in inadequate behaviour.

‘The investigation will seek to determine the circumstances of the meeting between that judge and an inmate who is regarded as highly dangerous and was recently convicted following a trial in the city of Esquel.

‘It will also look at how long the meeting lasted and its characteristics, with a view to confirming whether there have been violations of the Law of Public Ethics and internal judicial authority regulations.’

There has so far been no comment from the judge at the centre of the scandal.