Al Khor, Qatar: American soccer writer Grant Wahl was honoured with a tribute from FIFA on the desk where he was due to work at the World Cup quarter-final match between France and England.

A posy of white lilies and a framed photograph of Wahl taken in Qatar was left at the media seat that had been assigned to the 48-year-old journalist who died at the World Cup in the early hours of Saturday. 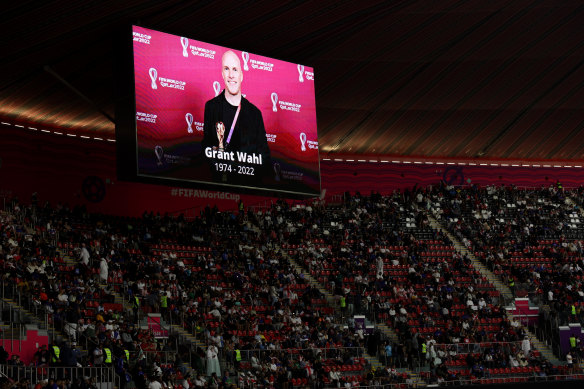 A tribute to Grant Wahl, an American sports journalist who died while reporting on the World Cup, before the quarter final between England and France.Credit:Getty

“Tonight we pay tribute to Grant Wahl at his assigned seat in Al Bayt Stadium. He should have been here,” FIFA said in a statement. “Our thoughts remain with his wife Celine, his family, and his friends at this most difficult time.”

About 20 minutes before the match started, the photograph of Wahl was displayed on big screens in two corners of the stadium. An announcement about his death was made to fans who applauded him.

Wahl fell ill while working during extra time of the Argentina-Netherlands game on Friday at Lusail Stadium. He was treated by medical staff in the media tribune and later taken by ambulance to the hospital.

He was reporting at his eighth World Cup. 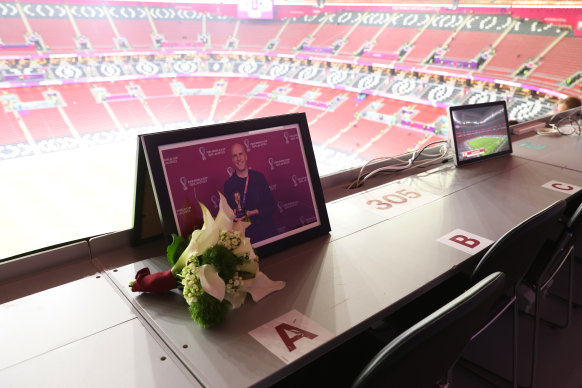 Flowers are placed in memory of Grant Wahl at the seat he had been assigned.Credit:Getty

A US State Department spokesman said the agency was in close communication with Wahl’s family and the officials were “engaged with senior Qatari officials to see to it that his family’s wishes are fulfilled as expeditiously as possible”.

Wahl’s wife Celine Grounder tweeted her thanks to those who had offered support after her husband’s death.

“I am so thankful for the support of my husband @GrantWahl’s soccer family & of so many friends who’ve reached out tonight,” she wrote. “I’m in complete shock.”

His agent, Tim Scanlan, said that Wahl had “appeared to suffer some kind of acute distress in the start of extra time” at the quarter-final match.

Scanlan said attempts were made to revive Wahl in the press box before he was taken to a local hospital, where he was confirmed dead.

Wahl was one of two American journalists reportedly detained two weeks ago when they arrived to cover the USA v Wales game wearing rainbow T-shirts in support of the LGBTQ+ community.

The rainbow symbol represents support for the LGBTQ community, and homosexuality is illegal in Qatar. Wahl changed shirts and was later allowed in.

Qatar’s World Cup organisers, the Supreme Committee for Delivery and Legacy (SC), paid tribute to Wahl’s “enormous love of football” and offered condolences to his family, friends and media colleagues.

Following his death, his brother, Eric Wahl, said in a post on Instagram that he believed Grant had met foul play.

“My name is Eric Wahl. I live in Seattle, Washington. I am Grant Wahl’s brother. I’m gay. I’m the reason he wore the rainbow shirt to the World Cup. My brother was healthy. He told me he received death threats. I do not believe my brother just died. I believe he was killed. And I just beg for any help,” Eric Wahl said in the video.

Grant Wahl was a longtime Sports Illustrated writer before going independent the past few years and selling subscriptions to his website, where he covered worldwide soccer with an extra emphasis on the US national teams and leagues. He previously was a contributor to Fox Sports’ soccer coverage.

“The entire US Soccer family is heartbroken to learn that we have lost Grant Wahl,” US Soccer wrote in a statement. “Fans of soccer and journalism of the highest quality knew we could always count on Grant to deliver insightful and entertaining stories about our game, and its major protagonists: teams, players, coaches and the many personalities that make soccer unlike any sport.”