Financier who stole £15m must return £1.3m or face more years in jail

Tory MP hopeful’s financier husband who stole £15 million from investors to feed gambling habit and pay school fees must hand back £1.5 million or face another eight years in jail 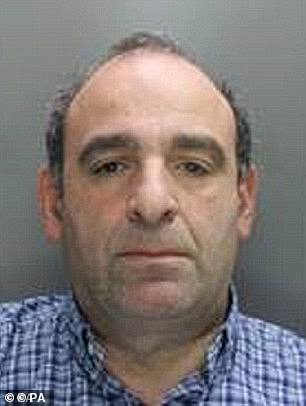 A disgraced financier and former Tory councillor’s husband, who swindled nearly £15million from investors, has been ordered to pay back £1.3m or face another eight years in jail.

Freddy David, who is married to two-time MP hopeful, Hannah David, used his good reputation within the Jewish community as managing director of HBFS Wealth Management to sell non-existent opportunities to his clients, a court was told.

He used part of an £80,000 investment from one victim to feed his gambling addiction and pay his children’s private school fees, while he also set up a restaurant called Let’s Meat and enjoyed trips to Greece and Israel.

David returned to Southwark Crown Court today for a confiscation hearing in which the prosecution probed his assets in a bid to claw back the missing millions.

Judge Deborah Taylor expressed concern over the issue of dividing mortgages and the court heard Hannah David, who is now divorcing him, had no knowledge of his wrongdoing.

Judge Taylor said: ‘I’m concerned with how to deal with the issue of dividing mortgages, bearing in mind their increase in value since they were bought.’

The judge ruled today the fraudster must return £1,340,111 over a period of three months or serve eight years imprisonment in default.

‘The application is for compensation in the sum of £6,998,942.17 in favour of victims of this fraud representing the loss to them. 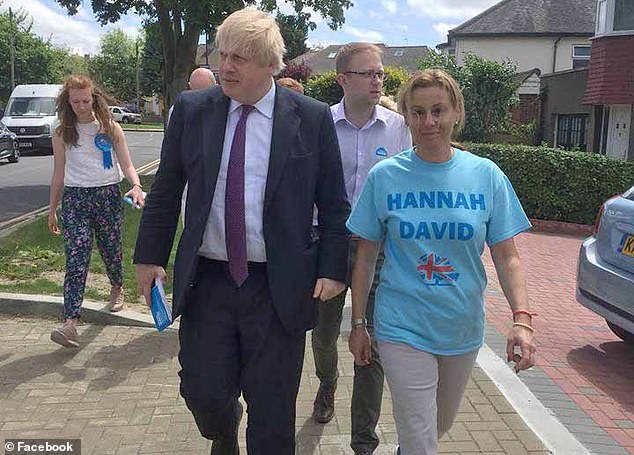 Boris Johnson on the campaign stump with Hannah David, who the court heard had no knowledge of her husband’s wrongdoing

Hannah David, 50, was a Conservative councillor in Hertsmere but stood down from the council to run as the party’s Parliamentary candidate for Harrow West in 2015 and 2017.

Giving evidence during the confiscation hearing she insisted she had ‘virtually zero’ knowledge of financial matters.

‘Since we’ve been together my view was he had more experience with finance and banking. I didn’t.

‘I dealt with the family, home and looking after the children, et cetera.’

Asked if she had any questions about what her husband was doing to raise money she replied: ‘None at all.’

Ms David stood for the Conservative Party in Harrow West in 2015 but narrowly lost to Labour’s incumbent Gareth Thomas.

David, formerly of Hartfield Avenue, Borehamwood, admitted one count of fraud by abuse of position and one count of obtaining a money transfer by deception.

He was ordered to pay £1,340,111 in compensation or serve eight years in default.