A fire broke out in Rome last night, destroying part of an historic bridge across the Tiber River before firefighters could extinguish it.

The blaze, thought to have been sparked by a gas canister explosion, destroyed part of the Industry Bridge across the Tiber River, prompting evacuations from three local nightclubs before firefighters could extinguish the flames around 4am on Sunday.

Firefighters said the fire erupted before midnight on Saturday near the Ostiense neighbourhood and raged for hours until they got it under control by 4am.

No one was injured in the fire, but Italian state TV confirmed that three nightclubs and local residences were evacuated near the riverside neighbourhood as a precaution, and hundreds of homes were left without electricity for several hours.

The 143-yard-long ‘Iron Bridge’ as it is known to Romans, which connects the densely populated Ostiense and Portuense neighbourhoods, suffered considerable damage and is no longer in a usable condition. 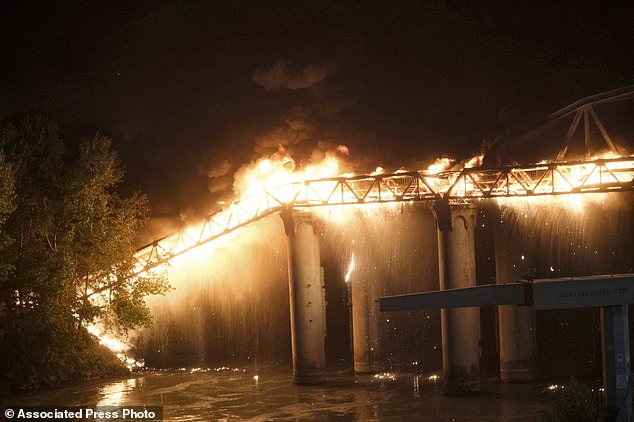 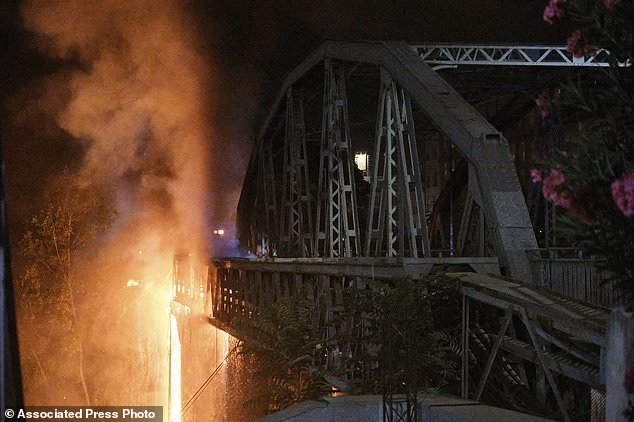 The blaze is thought to have been sparked sparked by a gas canister explosion, and took four hours to extinguish 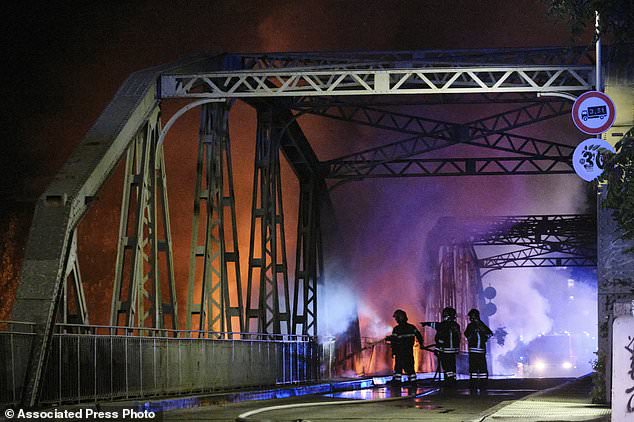 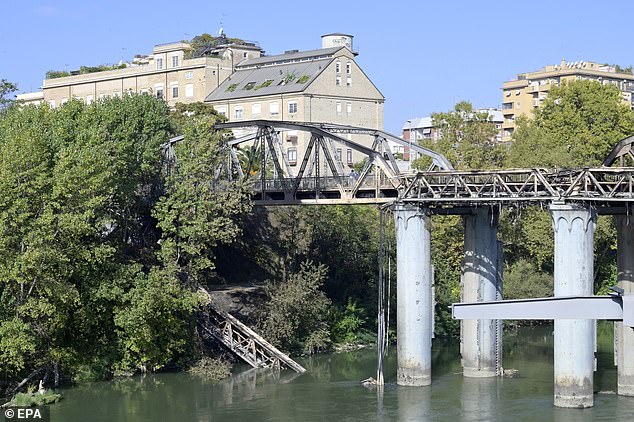 The blaze appeared to have started in an area of shacks occupied by homeless people on the river banks near Industry Bridge before spreading to the span itself.

State radio said authorities believe the fire might have been started by an explosion of a cooking gas canister by one of the homeless people, stating that another fire several years ago had also involved the shacks.

Firefighters said the blaze was then fuelled further by a damaged gas pipe.

A section of the bridge’s outer pedestrian walkway and stretch under the roadbed carrying utility lines broke off and fell into the Tiber, prompting emergency services to cordon off the area to prevent the bridge from being used.

Waterborne vessels have also been banned from navigating under the bridge until repairs can be carried out.

Pope Pius IX attended the 1863 inauguration of the bridge, one of the last major construction works in Rome in the waning years of the papal state controlling the city, which would soon become the capital of unified Italy.

The ‘Iron Bridge’ originally served as a railway line but was later renovated and outfitted to instead serve cars and foot traffic.

A plaque near one of the span’s ends pays tribute to 10 women who were executed on it in 1944 by German SS troops occupying Rome during the latter years of World War II.

The women were punished for having occupied a bakery to feed their families in the city where war made food scarce.

The fire broke out on the eve of elections for the next mayor, in which the main issue has been the general decay of infrastructure and public services in the Italian capital, and left the surrounding areas without an electricity supply for several hours.