A firefight has broken out between unidentified gunmen, Western security forces and Afghan guards at Kabul airport.

One Afghan guard was killed and three others were injured in the battle, which also involved US and German forces, the German military said on Twitter.

The report did not specifying whether the dead Afghan was one of the Taliban fighters deployed to guard the airport.

The airport has been a scene of chaos since the Taliban seized the Afghan capital on August 15 as UK and international forces try to evacuate citizens and vulnerable Afghans. 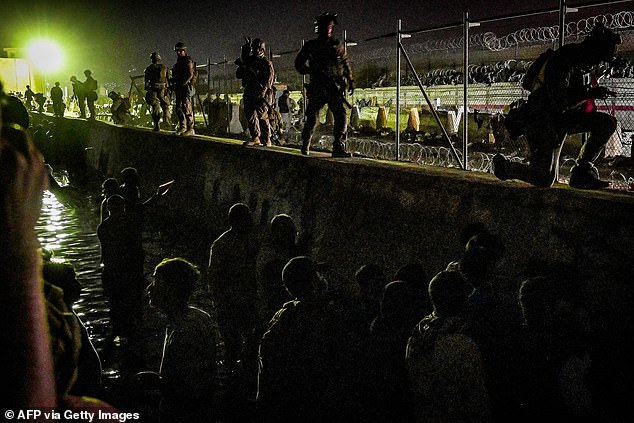 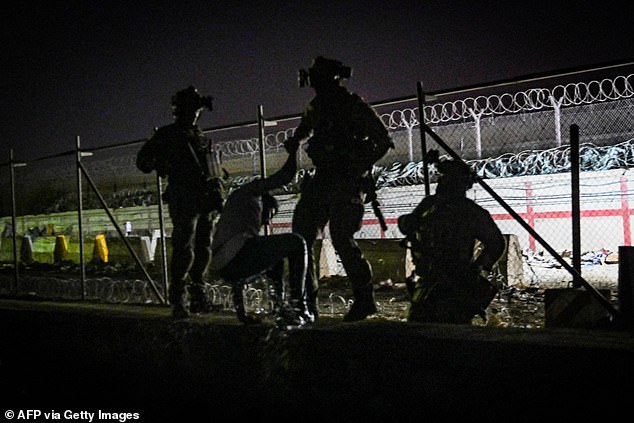 British and Canadian soldiers help an Afghan climb up on the wall of a canal as he with others wait near the foreign military-controlled part of the airport in Kabul, hoping to flee the country

On Sunday, Taliban fighters beat back crowds at the airport a day after seven Afghans were killed in a crush at the gates as the deadline for the withdrawal of foreign troops approaches.

Foreign forces in Afghanistan have not sought to extend the August 31 deadline to leave the country, a Taliban official said on Monday, after President Joe Biden said US troops might stay longer to oversee a ‘hard and painful’ evacuation.

The Taliban seized power in Afghanistan just over a week ago as the United States and its allies withdrew troops after a 20-year war aimed at overthrowing the Taliban and hunting down al Qaeda after the 9/11 attacks.

Foreign forces were working towards the end-August deadline agreed with the Taliban to leave the country and had not sought to extend it yet, a senior legal adviser to the Taliban leadership told Reuters on Monday.

Boris Johnson and G7 leaders are expected to plead with Joe Biden to delay the US withdrawal from Afghanistan tomorrow.

The Prime Minister will use a virtual meeting of world leaders on Tuesday to push for more time so thousands are not left behind in the clutches of the Taliban. 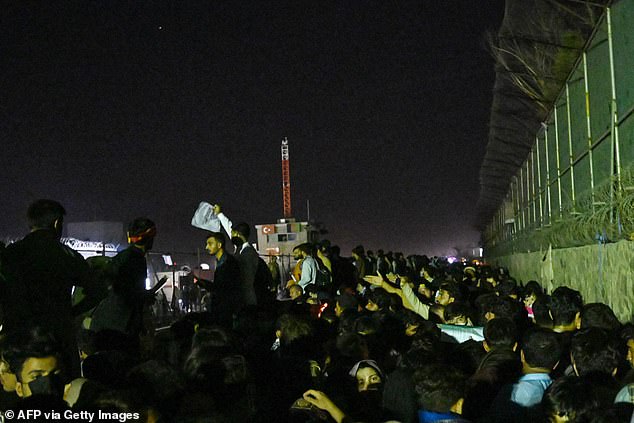 Pictured: Afghans wait outside the foreign military-controlled part of the airport in Kabul, hoping to flee the country following the Taliban’s military takeover of Afghanistan last night

However they could be facing an uphill battle, with the US President refusing to commit to an extension.

Nearly 6,000 UK citizens and Afghan staff had been airlifted out by the RAF by last night, and, according to reports last night, a further 6,000 people will be flown out this week.

But the rescue mission is reliant on the American military retaining control of Kabul airport. Along with losing key air support, British military officials fear Islamic State (IS) may also target UK soldiers at Kabul airport in suicide bomb attacks.

Biden, who last week flagged the possibility of troops remaining longer, said on Sunday the security situation in Afghanistan was changing rapidly and remained dangerous.

‘Let me be clear, the evacuation of thousands from Kabul is going to be hard and painful’ and would have been ‘no matter when it began’, Biden said in a briefing at the White House.

‘We have a long way to go and a lot could still go wrong.’ 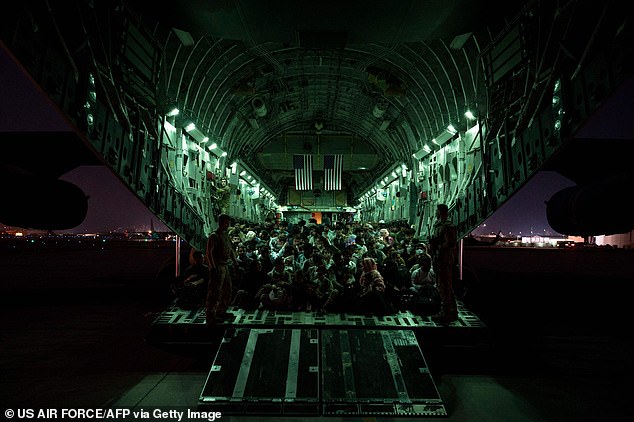 Asked by a reporter whether the United States would extend an August 31 deadline for evacuations, Biden replied: ‘Our hope is we will not have to extend but there are going to be discussions I suspect on how far along we are in the process.’

Biden said he had directed the State Department to contact Americans stranded in the country, where Taliban checkpoints are in place.

‘We’re executing a plan to move groups of these Americans to safety and to safely and effectively move them to the airport compound. For security reasons, I’m not going to go into detail … but I will say again today what I’ve said before: Any American who wants to get home will get home.’

Afghan allies of the West and vulnerable Afghans such as women activists and journalists would be helped too, he said.