The co-chair of the First Peoples’ Assembly of Victoria has implored the state government to urgently raise the age of criminal responsibility and has warned that Indigenous children “will not be used as bargaining chips” in a statewide Treaty negotiation process.

Ahead of her appearance on Tuesday at the Yoorrook Justice Commission’s truth-telling inquest, First Peoples’ Assembly co-chair Aunty Geraldine Atkinson has written an open letter to Victoria’s attorney general, Jaclyn Symes, insisting the government has “no excuses” for not immediately raising the age of criminal responsibility in the state from 10 years of age to at least 14. 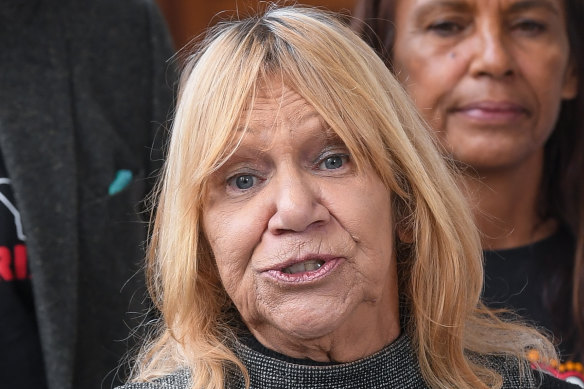 In Victoria, Aboriginal people are about 14 times more likely to be imprisoned than non-Aboriginal people, according to data recorded in 2016-17, and Aboriginal children are about six times more likely to be jailed than non-Indigenous children. The First Peoples’ Assembly has provided a written submission to the commission on raising the age of minimum criminal responsibility, youth justice and child removal related issues.

In her letter Atkinson, a Bangerang-Wiradjuri elder, says the assembly has been waiting for a year for the government to respond to its call for immediate action.

“This time last year we wrote to the government and said this reform doesn’t need to wait and should not wait for formal Treaty negotiations to begin. I’m bitterly disappointed that there’s been no movement, so the government is now on notice,” she said.

“Our children will not be used as bargaining chips, this reform needs to happen and it needs to happen now. No more excuses, there’s already lots of support in the parliament, let’s get it done”.

Witnesses last week told the commission how the child protection system often acted as a pipeline, moving Aboriginal children and young people into the criminal justice and youth justice systems. Several witnesses provided submissions and testimony strongly advocating for lifting the age of criminal responsibility from 10 to 14.

The calls came as the Standing Council of Attorneys-General (SCAG), which comprises attorney-generals from Australia’s federal, state and territory governments as well as New Zealand, met last Friday to discuss best practices in law reform. The meeting, chaired by federal Attorney-General Mark Dreyfus, identified the need for young offenders to be provided with adequate supports and services before it could recommend raising the age of criminal responsibility.

The council agreed to release a 2020 draft report originally prepared for the Council of Attorneys-General (CAG) – the precursor to the SCAG bi-annual meetings. The report was never agreed to by all jurisdictions and was not previously made available to all CAG participants, or the public. It provided detailed consideration “to the existing legal and policy framework and the reforms that could be considered to raise the age of criminal responsibility”, according to a statement from the SCAG meeting last week.

The Law Council of Australia says the current minimum age of criminal responsibility “is out of step with international human rights standards”. It says the legal threshold ignores the harmful impact of early contact with the criminal justice system, and social determinants that result in minorities such as Aboriginal children and children in out-of-home-care being over-represented within the youth justice and criminal justice systems.

The Australian Capital Territory committed in September to raising the minimum age of criminal responsibility to 14, and the Northern Territory last month passed laws to raise the age to 12.

The federal government has committed $81.5 million for the establishment of community-led justice reinvestment projects and a national independent justice reinvestment unit. Justice reinvestment involves redirecting resources from incarceration into addressing the underlying causes of crime as early as possible. It aims to act as a “circuit breaker” and prevent crime from happening in the first place.

The Yoorrook commission heard last week from witnesses who are survivors of the traumatic impacts of government policies that forcibly remove First Nations children from their families and Indigenous culture and attempt to assimilate them into non-indigenous society.

The historic child removal policies in Victoria were in place for about 100 years, from the mid-1880s with the Aborigines Protection Act 1886 until as recently as the 1970s. The inquiry heard that Victoria, however, continues to remove Aboriginal children from their families and culture and place them in out-of-home care at a rate far greater than other Australian states and territories.

Out-of-home care includes children being put into adoption, foster and permanent alternative care environments. Witnesses before the inquiry told the commissioners the Stolen Generations era was being perpetuated into the 21st century by current rates and practices of First Nations child removal.

Thirty per cent of children in out-of-home care in Victoria are First Peoples, with 56 per cent of that figure placed with non-Aboriginal carers. More than 50 per cent are separated from their siblings. Aboriginal and Torres Strait Islander people make up less than 1 per cent of Victoria’s population.