A major spring downpour has drenched Melbourne overnight as a storm trough moves east across the state, bringing flash flood warnings in some parts and good news for farmers.

Since 9am Sunday, the highest rainfalls in Melbourne were recorded at Moorabbin, 55mm, but at least half of that total (27mm) fell in the hour to 6am on Monday alone. 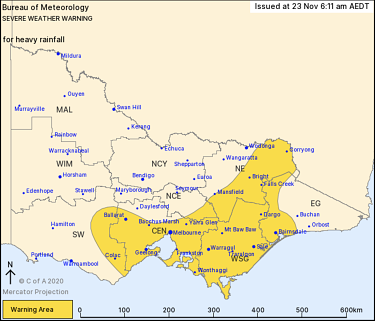 Areas impacted by a severe weather warning on Monday morning.Credit:Bureau of Meteorology

Senior forecaster at the Bureau of Meteorology Tim Bolden said the current storm system formed at Mt Gambier around midnight last night, but as it moved towards Melbourne overnight changed from a thunderstorm with lightning to a standard rainstorm.

"We haven't seen much in the way of lightning since 5.30am this morning," he said.

As a result, a severe weather warning for thunderstorms cancelled on Sunday night was re-instated at 6am on Monday for heavy rainfall forecast in Central, West and South Gippsland and parts of East Gippsland, southwest, north central and northeast forecast districts.

It was a steamy night with 100 per cent relative humidity in Melbourne at 6am. The mercury hovered around 19 degrees overnight.

It's the second day of heavy rainfall in the state after widespread thunderstorms and lightning on Sunday.

The strongest wind gust recorded on Sunday was 91km per hour at Horsham, and the highest rainfall fell at Hamilton with 25 mm clocked in a single hour alone, according to Mr Bolden.

He said the rainfall and lack of pests this season meant many Victorian farmers were experiencing their best season on record.

"Mother nature often throws insects and disease in front of you when you're productive but that hasn't happened this season," he told radio station 3AW on Monday morning.

The state's emergency service had responded to 139 requests for assistance over the 12 hours to 6.30am, 55 of which were for trees down.

Another 41 calls were related to building damage while 38 were for flood assistance.

"[The calls were] quite spread. Our busiest units were Ararat, Ballarat, and Hepburn," said the spokeswoman.

At 6.30am more than 500 homes were left without power. Ausnet, which services the east of the state had 125 customers off supply, while Powercor advised 451 customers in the state's west had no electricity.

Downpours across Melbourne are expected to ease around midday as the trough moves to the east of the state. The city is heading for a top of 20 degrees.

Mr Bolden said after the rains move across Melbourne there would be a little bit of drizzle that lingers behind it, before relatively dry conditions return for the next few days.

"There's not much at all coming behind this change," he said.

Catch all the day’s headlines