London: A former girlfriend of Prince Andrew has claimed Ghislaine Maxwell used her as “bait” while seeking out victims for paedophile Jeffrey Epstein.

Lady Victoria Hervey, 44, who once briefly dated Andrew, said she believed she was drawn into Maxwell’s circle because her presence “kept it more interesting for all the men [Maxwell] was entertaining”. 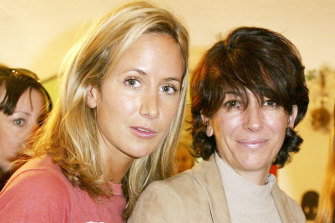 Lady Victoria Hervey with Ghislaine Maxwell at a fashion launch in 2004 in Hollywood, California. Credit:Getty Images

She also suggested that Epstein and Maxwell were a “double act” like “Batman and Robin”, adding: “It wouldn’t have worked with him on his own. It was a lot easier for her to approach other women, being a female.”

She told the ITV documentary Ghislaine, Prince Andrew and the Paedophile, which aired in Britain on Tuesday night (UK time), that Maxwell used her as “bait” to entertain Epstein’s friends.

“I think he just kind of sat back and sort of waited for her to sort of go fishing and go find however many girls were needed to entertain his friends. I think I was pretty much used as bait.”

“You know, looking back at, you know I was really young and naive, and she’s entertaining these big businessmen. I didn’t realise it of course at the time, but looking back…”

Hervey told Lorraine Magazine ahead of the documentary that she was naive about what was going on.

“Besides the situation of having a feeling that there were video cameras in the apartment… it was just dinner parties and social gatherings, and it all just seemed very fun at the time.

“This is in the early 2000s, when no one had any idea of what people found out later on. People wanted Ghislaine and Jeffrey at all their events.”

Andrew’s accuser in the civil trial, Virginia Roberts Giuffre, has claimed she was forced to have sex with him on three separate occasions in 2001, when she was 17. He denies all the claims. 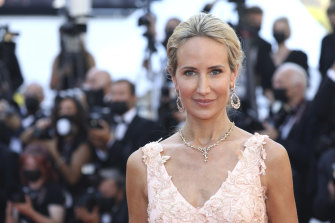 A New York court will hear the case later this year unless Giuffre accepts a potential multimillion-dollar payoff.

Andrew is under pressure from members of his family and royal courtiers to draw a line under the case to avoid further damaging the reputation of the monarchy. However, in the absence of a financial deal, he could be questioned under oath as soon as next month as legal proceedings continue.

Giuffre’s lawyers have asked to take depositions from Maj Robert Olney, the Duke’s former equerry, and Shukri Walker, who believes she saw Andrew in Tramp nightclub with Giuffre on the night of one of the alleged sexual assaults.

Meanwhile, the Queen may have more pressing concerns when it comes to her second son, but as a horse-breeding fanatic, she has suffered another blow with York racecourse revealing it is to change the name of the Duke of York Stakes to distance itself from Prince Andrew.

The course is keen to clarify that the Group 2 sprint was not founded in honour of the current Duke – who has been stripped of his military titles and patronages as he faces a civil sexual abuse trial – but was named after his great grandfather, King George V.

For the Queen, 95, the issue is particularly poignant as the title was held not only by her grandfather but by her father, George VI, before he became king. She personally bestowed it on her son when he married in 1986.

James Brennan, head of marketing and sponsorship at York, said they did not want the name of the race to be a distraction during the fixture in May.

He told The Yorkshire Post: “It has never been directly about Prince Andrew. With that in mind, however, we are going to explore how we can make the name a lot clearer about its history – and that the name refers to an entirely different Duke of York.”

The current favourite as a replacement name is the 1895 Duke Of York Stakes, which clarifies that it is a long-established race and has a connection to another Duke of York. Any change will have to be carried out with the approval of the European Pattern Committee, which regulates Group races.

Prince Andrew was appointed York’s first patron in 2015, when he opened the course’s weighing room. However, the position was withdrawn in 2019 when he stepped back from public duties in the wake of a BBC Newsnight interview about his friendship with Epstein, the convicted sex offender, and Maxwell, who has since been found guilty of sex trafficking.