A Melbourne GP who doled out 149 dodgy child vaccination exemptions and doctored a letter from the then-Deputy Chief Health Officer has been banned from practising for at least six years, and stripped of his title.

John Piesse came under intense scrutiny for helping parents side-step Victoria’s “no jab, no play” laws, with the medical regulator raiding two clinics where he worked in Melbourne’s east in September 2017. 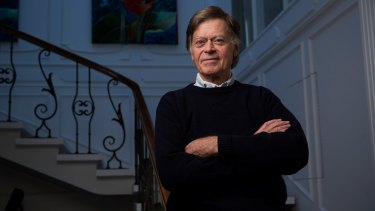 Anti-vax former general practitioner John Piesse, who has been stripped of his “doctor” title. Credit:Paul Jeffers

It was at those clinics – Mitcham’s Natural Healing Centre and Hawthorn’s National Institute of Integrative Medicine – where the Australian Health Practitioner Regulation Agency, with the help of authorities, found copies of the forged letter from the then-Deputy Chief Health Officer Brett Sutton.

The Victorian Civil and Administrative Tribunal, in a disciplinary hearing brought on by the Medical Board of Australia, found that the letter, written by Professor Sutton in July 2017, originally warned the doctor he should issue vaccination exemptions only for children who were legitimately exempt.

However, the tribunal heard that he cut out three-quarters of the text, transforming the letter from one of concern, into one that “did no more than state that the [then-Deputy Chief Health Officer] confirmed Dr Piesse had the power to issue exemption certificates”.

In response to a query from one kindergarten about his vaccinations exemptions, Mr Piesse sent them the letter. 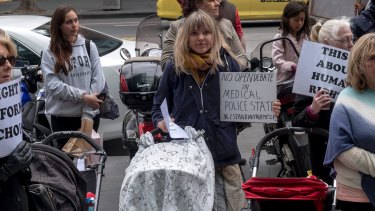 Anti-vaccination protesters rally outside the Medical Board of Australia in support of John Piesse in 2017.Credit:Luis Enrique Ascui

He later wrote in an apology: “Whilst at the time I did not have confidence that all children can be protected from harm by limiting vaccination only in cases of immune-compromise and past anaphylaxis, I acknowledge that altering Dr Sutton’s letter by redacting part of it was not good conduct.

“I regret this mistake.”

The tribunal found that, from January through to August 2017, Mr Piesse – who fought at the tribunal to keep referring to himself as a “non-registered doctor” – created and signed 149 false immunisation exemption certificates for unvaccinated children.

The tribunal, which handed down its decision in the matter this week, heard families would come from far and wide in Victoria, and even interstate, to get the fake certificates.

Along with handing out the dodgy exemptions, Mr Piesse also completed 177 false Medicare vaccination forms so parents and carers of unvaccinated children could claim benefits from the government to which they were not entitled.

The tribunal heard that Mr Piesse attended a screening of the anti-vaccination film Vaxxed in August 2017 at the Hawthorn Arts Centre, where he told an audience medical practitioners could easily support vaccination exemptions, and he was happy to do them up for parents.

He also spouted views that childhood vaccinations were unsafe. The tribunal heard the medical exemptions he handed out said children were exempt from getting a jab “until vaccines [were] proven safe by controlled clinical studies”.

The board also alleged Mr Piesse did not cooperate with inquiries into his conduct, and “misused his status as a medical practitioner”.

The former GP, who has not practised since his registration was suspended by the board in 2017, accepted liability for all the allegations against him.

They decided to disqualify Mr Piesse from applying for registration for six years – until January 24, 2028 – and banned him from using the title “doctor” until he was, if ever, registered again.