Former solicitor-general to defend ABC in fight with Christian Porter

Former Commonwealth solicitor-general Justin Gleeson, SC, will head the legal team defending the ABC against a Federal Court defamation suit filed against it by Attorney-General Christian Porter, in a major coup for the broadcaster.

The team will be overseen by in-house lawyer and former Minter Ellison partner Grant McAvaney, the broadcaster’s head of disputes and litigation. 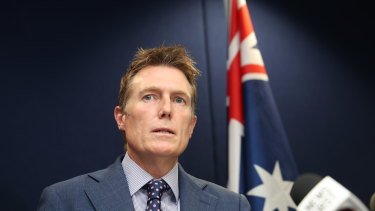 Under a timetable set by the Federal Court on Wednesday, without a hearing but with the agreement of the parties, the ABC has just over six weeks to file its written defence to the lawsuit. The court appears to be fast-tracking the case, which was filed on Monday.

A trial date has not yet been set. Under the timetable, Mr Porter’s lawyers must provide further information about some parts of his claim by March 23.

The ABC is to file its written defence by May 4, with a reply from Mr Porter’s lawyers due on May 11.

The case is listed for a preliminary hearing in court on May 14. It is not impossible that a trial will be held before the end of the year, unless the matter settles.

In a statement of claim filed on Monday, lawyers for Mr Porter, who is on medical leave, seek damages, including aggravated damages, for a February 26 article published on the ABC’s website, headlined “Scott Morrison, senators and AFP told of historical rape allegation against Cabinet Minister”.

ABC journalist Louise Milligan, who broke the story, is also named as a party to the lawsuit.

Mr Porter, who is not named in the ABC article, has retained high-powered Sydney barristers Bret Walker, SC, and Sue Chrysanthou, SC, and solicitor Rebekah Giles.

The statement of claim alleges the ABC article conveys a series of false and defamatory claims about Mr Porter, including that he “brutally raped a 16-year-old girl in 1988”, when he was 17, and that this contributed to her death by suicide.

Mr Porter’s lawyers say the article also conveys that he was “reasonably suspected by police” of rape, warranting criminal charges being brought against him, and there were “reasonable grounds for suspecting” both that he committed the crime and that it “contributed to [the woman] taking her own life”.

Mr Porter has strenuously denied allegations made by a woman that he raped her during a debating tournament in Sydney in 1988. The woman took her own life last year, after telling NSW Police that she did not wish to pursue her complaint.

In a statement on Monday, Mr Porter’s solicitor, Ms Giles, said it was open to the ABC to plead a truth defence to these claims, effectively turning the case into a rape trial inside a defamation case.

The broadcaster is unlikely to plead truth. In almost all high-profile defamation cases a media defendant will argue it did not make the claims alleged by a plaintiff but made a less serious claim, such as that there were reasonable grounds for an investigation.

It may also seek to rely on the public interest-style defence of qualified privilege, which in some cases encompasses the implied Constitutional freedom of communication on government and political matters.

Catch all the day’s breaking news