Freezing migrants are brought ashore at daybreak by RNLI

And still they come: Freezing migrants are brought ashore at daybreak by RNLI as 100 more men, women and children make the perilous crossing to Britain just days before Christmas

Around 100 more migrants have already arrived on Britain’s shores this morning – just days before Christmas.

Tired and freezing from the winter cold, at least 30 people, including men, women and children, were seen without lifejackets stepping on to dry land Dungeness in Kent at around 7am after being picked up in the English Channel.

They walked up the vast shingle beach escorted by police before being taken off to be processed.

Down in Dover, Border Force vessels have brought in dozens more – leading them up a gangway from the pontoon to the immigration processing facility that has seen thousands arrive this year.

The last few days have seen an influx of migrants after bad weather conditions made crossing the treacherous shipping lane nearly impossible for almost two weeks.

Before Wednesday the last groups to make the crossing came on December 5, when Border Force needed three boats to deal with the numbers. 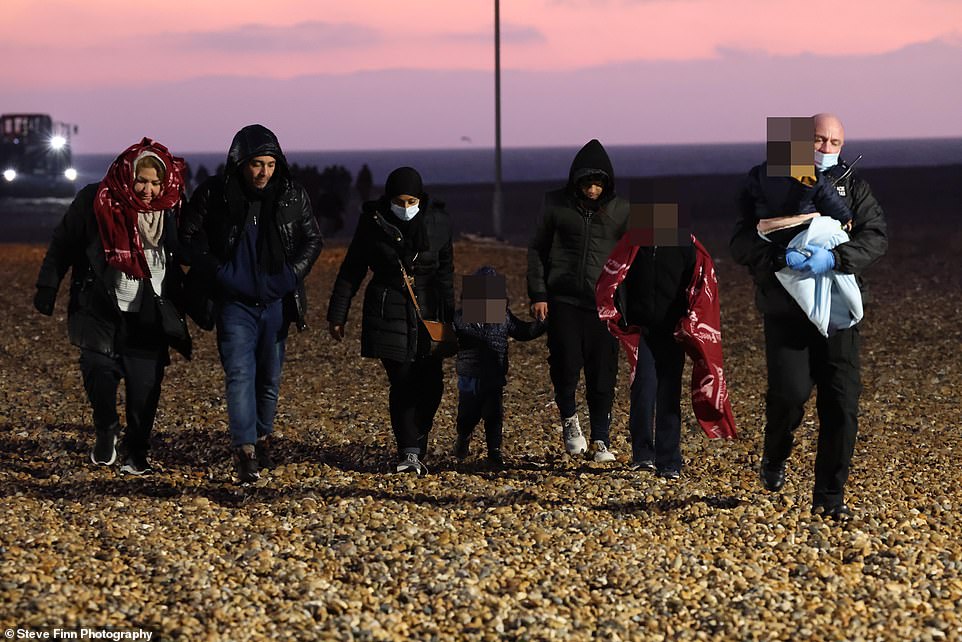 Dozens of men, women and children, were seen without lifejackets walking up the vast shingle beach at Dungeness in Kent at around 7am after being picked up by a lifeboat 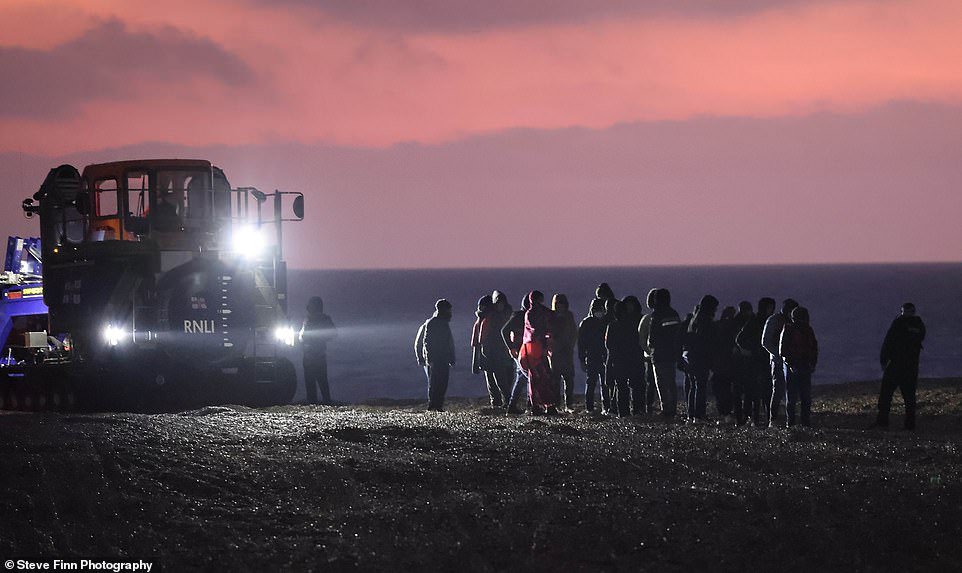 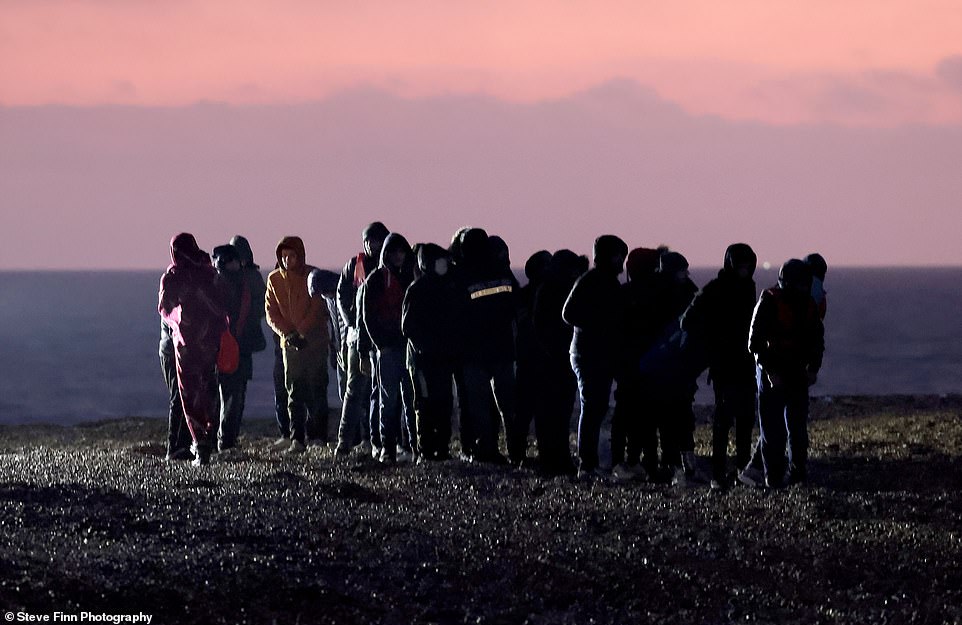 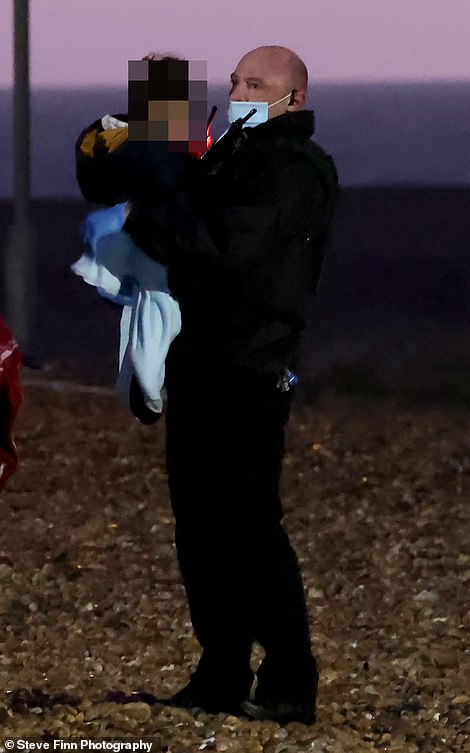 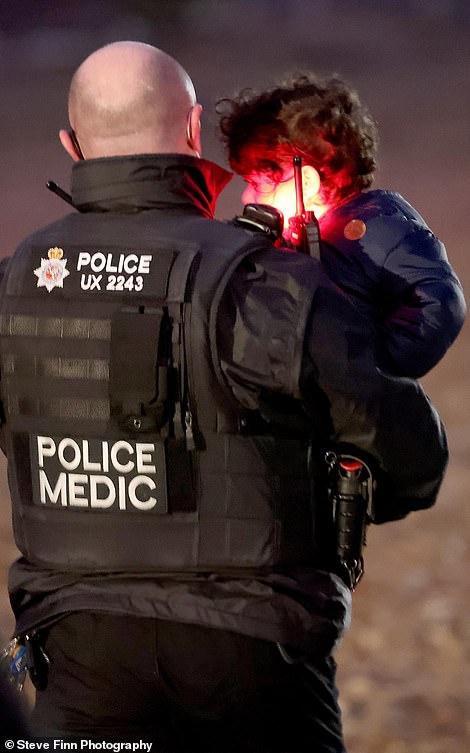 Around 40 migrants were detained by Border Force officials on Thursday after they landed on the beach at Dungeness at 1.30pm after being brought to shore on a RNLI lifeboat.

It comes after inspectors found migrants were still being held in ‘very poor’ conditions after coming ashore despite Home Office assurances of ‘significant improvements’.

Women who said they had been raped by smugglers were ‘not adequately supported’, and lone children were being held with unrelated adults, according to findings published after migrant detention facilities had been visited in the past three months.

Earlier this week, the Home Office confirmed part of the Ministry of Defence (MoD) site in Manston, near Ramsgate, will also be used to process migrants.

Meanwhile, French prosecutors said all 27 of the people who died after trying to cross the English Channel by boat last month to reach the UK have now been formally identified.

The group, who drowned when their boat sank in the Channel last month while trying to reach Britain, included seven women, a teenager and a seven-year-old girl.

The final identification made was of a 29-year-old Vietnamese man, the Paris authorities said.

Most of the victims of the boat accident were Iraqi Kurds, according to the 26 earlier identifications. Four Afghan men, three Ethiopians, a Somalian, an Egyptian and an Iranian Kurd were also drowned in the disaster. 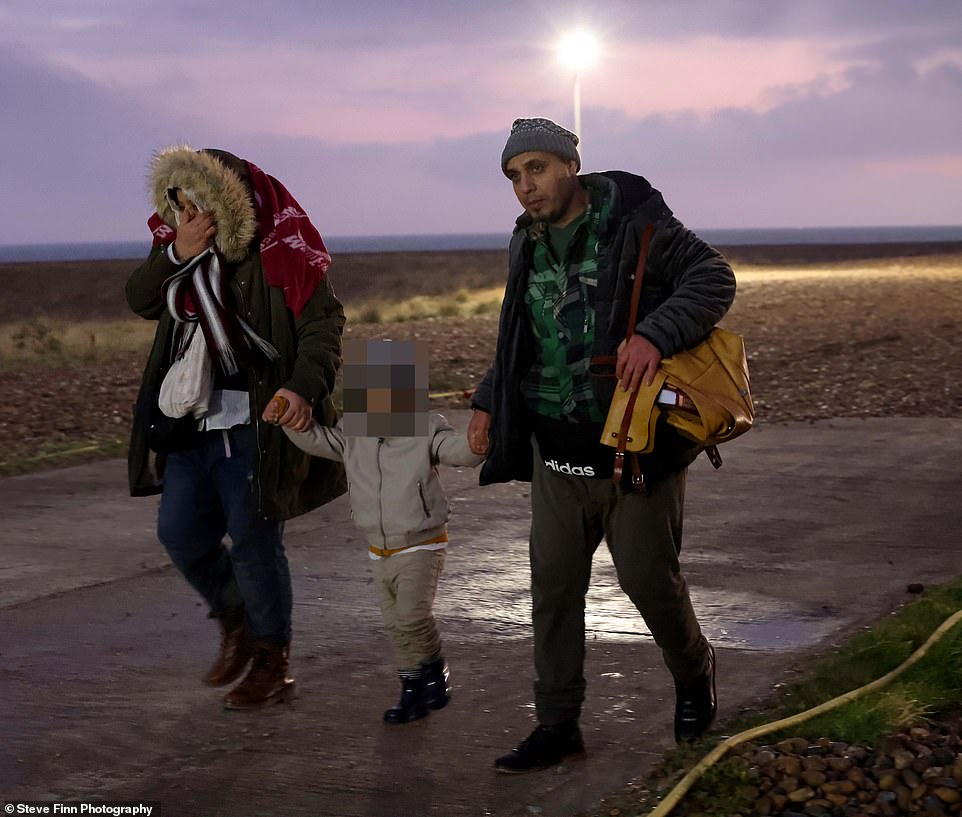 It comes after inspectors found migrants were still being held in ‘very poor’ conditions after coming ashore despite Home Office assurances of ‘significant improvements’. Pictured: A family arrives at Dungeness having been rescued by a lifeboat 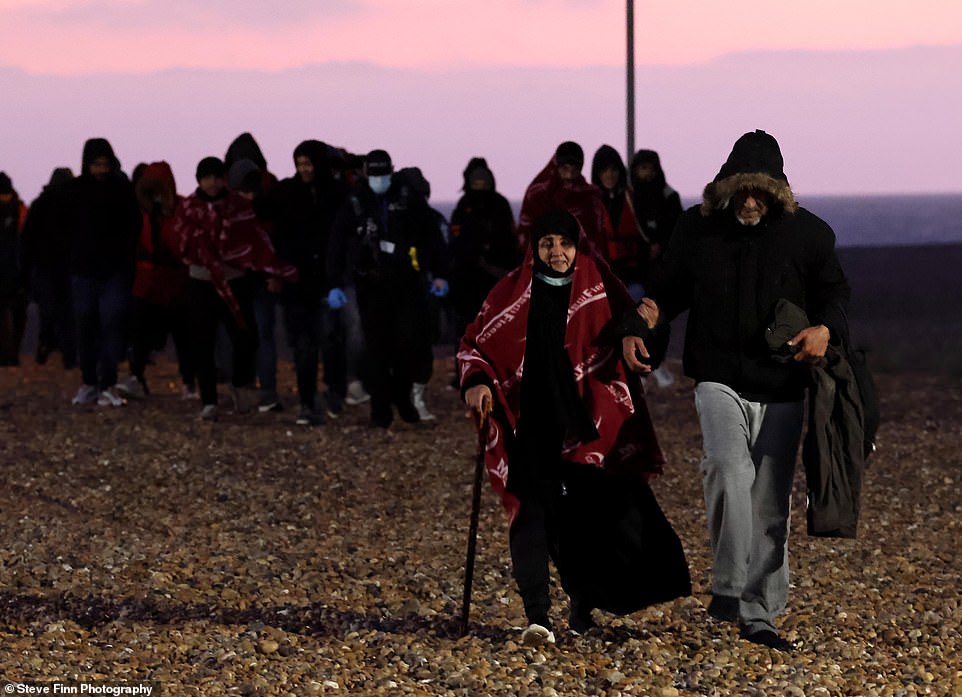 Meanwhile, French prosecutors said all 27 of the people who died after trying to cross the English Channel by boat last month to reach the UK have now been formally identified 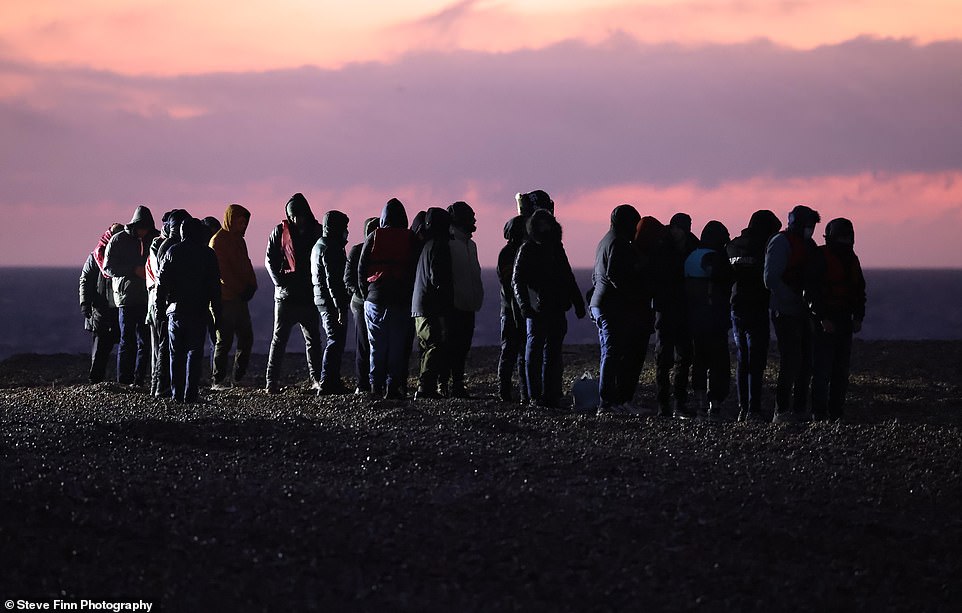 Dan O’Mahoney, Clandestine Channel Threat Commander, said: ‘We are determined to work with our European and international partners to target the ruthless organised criminal gangs behind them’ 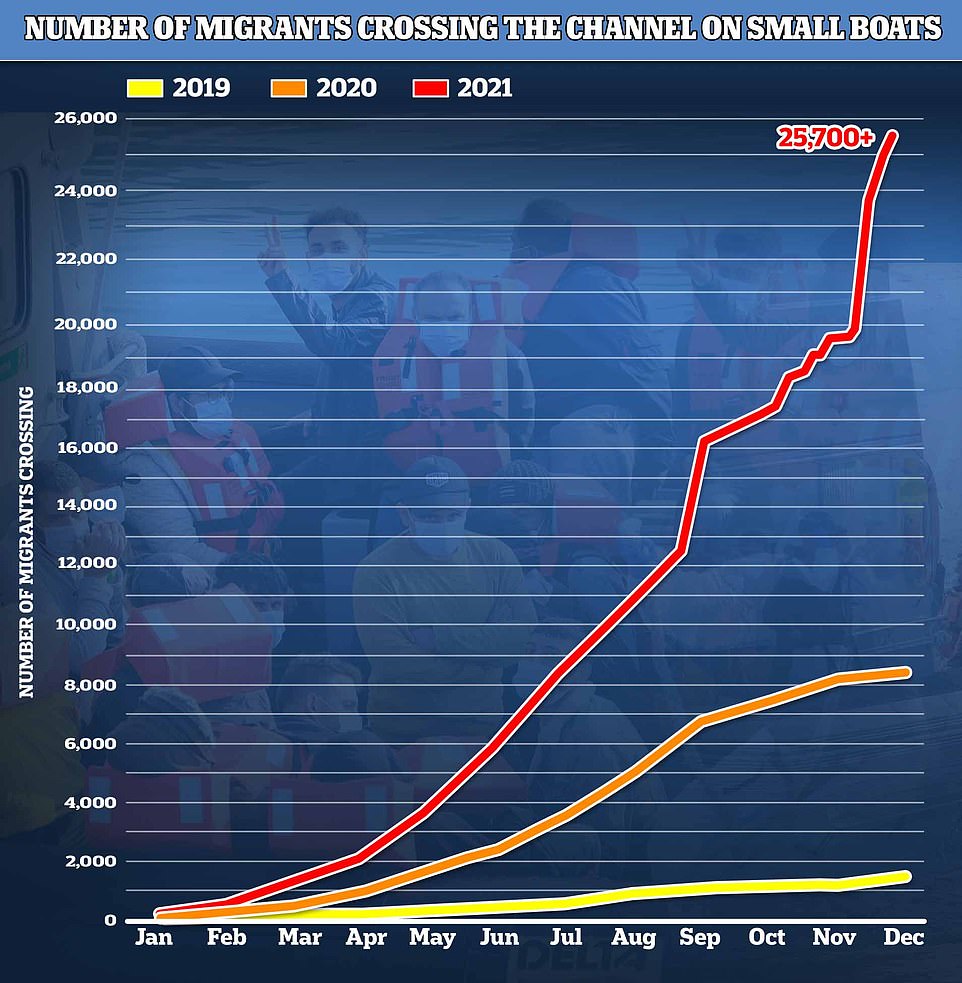 What happens to migrants after they arrive in the UK?

Migrants who have been picked up after landing or intercepted at sea are taken to a Border Force processing centre, usually near Dover

Here arrivals are triaged to identify any medical needs or vulnerabilities, fed and checked to see if they have a criminal record. Adults have an initial interview before being sent to accommodation centre across Britain, paid for by UK taxpayers and provided by private contractors.

The migrants are given £37.75 per week for essentials like food, clothes and toiletries while they wait for a decision on their asylum application. Kent County Council normally takes unaccompanied children into its care, although other local authorities are also involved in this programme.

Other migrants might be kept in a detention centre ahead of a plan to send them back to Europe. However, just five were deported last year as ministers admitted to ‘difficulties’.

While a member of the EU, Britain was part of the Dublin Regulation, an EU-wide deal that required migrants to apply for asylum in the first member state they arrive in and could be deported back to that country if they moved on to another.

However, since Brexit there has been no formal arrangements to allow migrants to be deported to France or another EU member country.

The majority were men but seven women, a 16-year-old and a seven-year-old were also among the dead.

Authorities often have difficulties identifying dead migrants because they do not carry official documents and their family members frequently have to travel from remote areas overseas to see the bodies.

The accident was the most deadly involving a migrant boat in the Channel and cast a spotlight on the increasing number of desperate people seeking to cross the narrow waterway between France and England.

It also caused major diplomatic tensions between London and Paris.

Within 48 hours of the accident, French President Emmanuel Macron accused British Prime Minister Boris Johnson of being ‘not serious’ in his approach to stopping the crossings.

France was irked by Johnson’s initial reaction, which was seen as deflecting blame onto France, and then by his decision to write a letter to Macron which he published in full on his Twitter account before the French leader had received it.

According to the investigation, the migrants left in an inflatable boat from Loon-Plage in northern France at night.

After their boat capsized only two men, an Iraqi Kurd and a Sudanese national, were rescued safely. according to the French interior ministry.

According to the Iraqi survivor there had been a total of 33 people aboard.

French investigators are still trying to establish a clearer picture of what happened during the disaster.

They are investigating reports the passengers had telephoned both French and British emergency services, appealing for help when the vessel began sinking.

Dan O’Mahoney, Clandestine Channel Threat Commander, said: ‘Last month’s tragedy is a devastating reminder of the dangers of Channel crossings and we are determined to work with our European and international partners to target the ruthless organised criminal gangs behind them.

‘The Government’s New Plan for Immigration will be firm on those coming here via illegal routes and fair for those using safe and legal routes. This will reduce the pull factors in the current asylum and immigration system.’

So far 26,747 migrants have been detained by Border Force after reaching the UK by small boat in 2021.