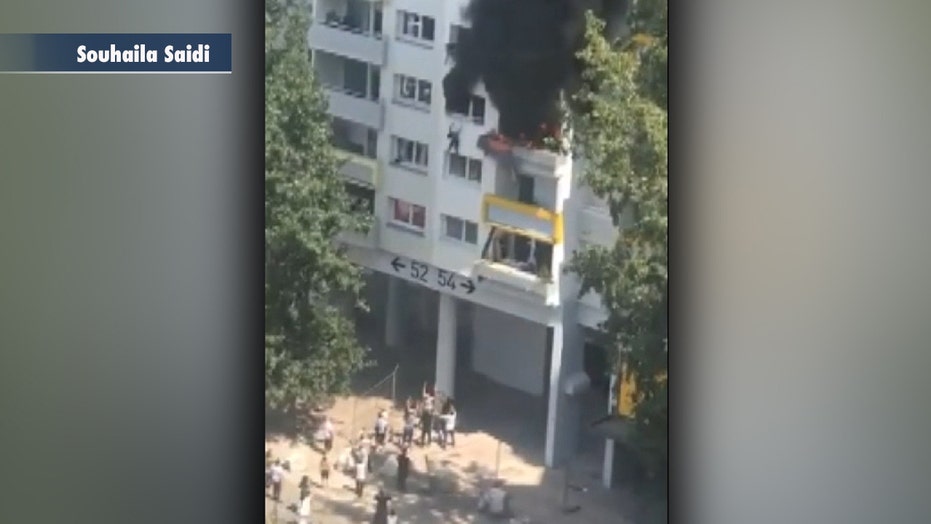 Children dropped off third-floor of burning apartment building in France

Raw video: Crowed catches children as they are dropped from the third floor of a burning apartment building near the town of Grenoble in France.

A startling video has emerged of two French children falling out of an apartment building window and into the arms of locals to escape a raging fire engulfing their home.

The children in Grenoble, ages 3 and 10, managed to survive the plunge from the building’s third floor and have since been treated for smoke inhalation, according to the BBC.

“Luckily they jumped one after the other without being seriously injured,” Souhaila Saidi, who lives in a nearby apartment, told Storyful.

Video of the tense scenes that unfolded Monday began with one child being held over the apartment window’s ledge as flames sent black smoke billowing out of the unit.

The child then falls at least 40 feet after being let go, drawing screams from residents who gathered to watch.

The child thankfully is caught by a crowd that formed below the window of the apartment.

The second child then sits on the ledge of the window before making a leap into the outstretched arms of the locals, drawing more gasps and cries.

Two of the Good Samaritans who helped catch the children suffered broken arms as a result of the falls, the BBC reports.

Mayor of Grenoble Eric Piolle hailed the bravery of all who responded, writing on Facebook that “hand in hand, they allowed the two little ones to get out unharmed from this drama.”