From the Archives, 1972: Concorde’s 002 booms into Melbourne

002 booms into Melbourne with belch of smoke

Beautiful bird has us hanging around

The signs at the beginning of the Tullamarine freeway prohibit bicycles, but such trifles did not deter the small boys pedalling their pilgrimage to see Concorde come in. 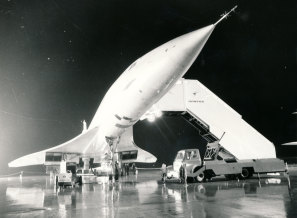 It was a chill day for the watchers — the old men and boys, the mothers and trails of doll children muffled in quilted parkas, the huddles of ground crew, ear-muffed and dungareed, the protesters with their babies in papooses and their clothes plastered with bright-yellow stickers pleading “Stop the Concorde — save the Earth”.

Through the clouds over the Sunbury hills the light was cool gold and translucent blue.

Down on the tarmac at Bay 6 the official few who were allowed through the security cordons shifted from one foot to the other and blew into their hands.

Then someone spots her — a tiny image moving very slowly across the clouds.

A shaft of thin light strikes and turns her to a silver boomerang. Now is the eastern sky she turns back over her own trail of black smoke and becomes just another moving speck.

A hundred yards away a black cormorant flaps slowly across the darkening sky.

Now the Concorde has grown to a black triangle and is coming straight in. Then she turns to show that eerie upreared shape, some sinister memory of a cloaked shape of doom.

She tilts up, transformed to a stately dowager, then touches down. A spurt of blue explodes as the wheels grip the runway.

She’s in profile and once again an oddly ordinary plane, except for the pointed proboscis that looks like an afterthought and the sharpness of the wings.

A blood-red stripe cuts the length of her white fuselage. She pirouettes in a tight circle, the down-pointed nose giving a wary look. The noise will never end and a red light winks on her underbelly.

She stops, and close up she is very clean and new and sharp. The engines die and the memory of the sound still thrums. The VIPs alight, looking like any other air travellers.

The protesters fold their banners and leave a scatter of yellow stickers in their wake. And the Concorde watchers climb into their cars and set off home along the crowded freeway — very, very slowly through the rain.