Home » World News » From the Archives, 1979: They’re off and racing in the Skylab stakes

From the Archives, 1979: They’re off and racing in the Skylab stakes

THEY’RE RACING IN THE SKYLAB STAKES 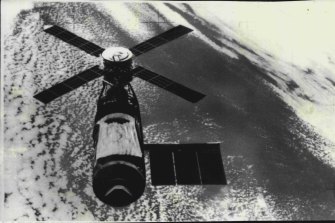 A view of the Skylab space station.

Yesterday he was jetting half-way around the world to San Francisco to claim a $10,000 reward for pieces of Skylab that he believes he has. 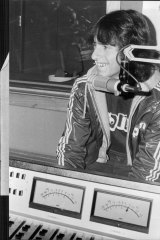 “I found them in the backyard the morning after Skylab passed over,” he said between planes at Tullamarine.

He hopes to be the first person to get to the office of the San Francisco ‘Examiner’ to claim a reward offered by the newspaper. But he might have competition.

A Kalgoorlie lawyer, Mr Chris Lalor, acting for three men, said they, too, sent a piece of Skylab debris to the ‘Examiner’.

He did not elaborate on how the piece of space junk was being transported.

But Mr Thornton, visibly stunned by his sudden propulsion into the wide world, was confident of winning the race.

“I won’t be staying long… I’m homesick already and missing my girlfriend, Jo Motzel,” he said, clutching a sandwich bag containing about 15 pieces of space junk.

The Government Chemical Laboratory in Perth made detailed microscopic and X-ray tests of his charcoal-like pieces and confirmed they were “consistent with material used in spacecraft.”

Mr Thornton’s Qantas dash was organised by Perth radio station 6PM and he will get to San Francisco 15 hours before the newspaper’s deadline.

He was dressed in a brown check shirt, trousers and runners. “I left home in such a hurry for Perth yesterday I didn’t have time to bring anything else,” he said.

A Qantas official gave him an emergency bag containing toiletries, comb and bush, slippers and a kimono.

Mr Thornton and a friend, Ray Rose, found the pieces scattered around the shed behind his house.