Home » World News » Gina’s digs a gold mine for Barnaby

Gina’s digs a gold mine for Barnaby

Who says that Barnaby Joyce has a problem with women? After all, he’s only got the country’s richest female on his side.

In fact, mining magnate Gina Rinehart , all $31 billion of her, has stepped forward to host the newly minted Nationals leader’s first fundraiser, scheduled for later this month. Invitations to the VVIP event have been quietly circulating over the past week, inviting donors and FOBs (Friend of Barnaby) to an evening at Rinehart’s palatial coastal hideaway in Noosa on Queensland’s Sunshine Coast. 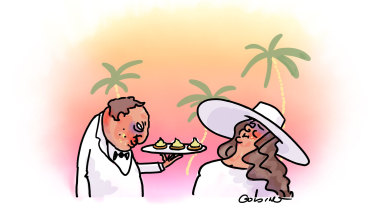 There’s no word yet on whether the Hancock Prospecting boss will be there herself, nor whether she’ll boost donations on the evening with a giant novelty cheque.

It’s great to see Rinehart’s enthusiastic support of Joyce hasn’t diminished with the swings and roundabouts of his political career. Over the years, her ardent support for Joyce has included $40,000 on National Agriculture Day in 2017 which the magnate billed as an award to the New England MP for being a “champion of our industry”. Amid fierce political criticism, Joyce returned the cash.

In 2013, Rinehart donated $50,000 to his election campaign, and in 2011, Joyce was one of three Coalition MPs flown on Rinehart’s private jet to Hyderabad in India for a mining associate’s wedding.

As for the upcoming bash, invited guests have the dual honour of being able to check out what is believed to be Rinehart’s new Noosa pile purchased at the start of the year in a deal worth more than $11 million. That makes the ’do a political fundraiser and a housewarming in one.

After 2½ years of Joyce in the wilderness, Rinehart now has a lot to celebrate.

Who’s new at the zoo? Almost everyone, it seems.

CBD readers will recall the weird corporate governance sitch surrounding the Zoological Parks and Gardens Board, the not-for-profit organisation that runs the Healesville Sanctuary, Melbourne Zoo and Werribee Open Range Zoo. It requires the state government to rid itself of all board members. At the time, Zoos Victoria said its board members’ terms all expired at the same time every three years and “often current board members reapply”.

Now, Minister for Energy, Environment and Climate Change Lily D’Ambrosio has announced the new board. And only two members survived.

Chair Kate Vinot, an executive at the Bureau of Meteorology, deputy chair Geoff Wescott, a former associate professor of environment at Deakin University, are both gonski.

After merely one term, board member Rebecca McKenzie has leapt into the chair’s seat. As chief executive of the City of Glen Eira, McKenzie brings extensive expertise in local government, so she’s clearly used to wrangling animals.

Minister D’Ambrosio has staggered the appointments to avoid another wholesale clean-out and hit female representation and cultural and linguistic diversity targets. In the animal kingdom, as in state government appointments, diversity is strength.

Andy Hopkins’ row with the AMA smash repairs giant he once led is becoming messier.

More than six months after Hopkins resigned as chief executive following allegations he had wrongly billed more than $1 million of personal expenses to the company — including painting his winery and purchasing fast cars — he has now been accused of charging the company for renovations at his Perth waterfront home and Margaret River winery.

The British-born Hopkins has repeatedly rejected claims of wrongdoing. He says he has been subject to a “complete stitch-up” by the listed group he led for 10 years.

But company lawyers have added to their laundry list of claims against him in a new statement of claim lodged in the Federal Court. It alleges Hopkins charged the company more than $700,000 for building works at his Swings and Roundabouts Winery in Yallingup, in addition to works at his Dalkeith waterfront.

The claims lodged on June 30 allege $702,986.87 of works completed at the winery were charged to a service company which is a subsidiary of the AMA Group.

“Neither the Service Company nor any member of the AMA Group gained any benefit,” the claim states, adding that Hopkins didn’t disclose to the company that the cash was being spent for his private benefit, nor did the company agree to the costs. The lawyers also allege Hopkins instructed a procurement officer to direct the builders to bill AMA sites where they weren’t doing any work instead of the winery. An earlier statement of claim filed in May alleged that tradesmen completing jobs at Hopkins’ home had been instructed to write up invoices as work on AMA sites. An invoice allegedly sent by a painter to a procurement officer said: “this is work I have done at andy [sic] house said to put it down as Osborne Park Gemini” which refers to an AMA site.

On Thursday, a spokesperson for Hopkins rejected the new claims. “This is another false accusation from AMA that is unsubstantiated and will be proven so in court,” they said. “Whilst these are matters for the court to ultimately determine, our client takes the view that this claim by AMA is unsubstantiated and simply won’t be made out.”