Girl, 14, is raped by a coronavirus patient while his friend stood guard in a bathroom at India’s largest quarantine centre in Delhi as country’s Covid-19 death toll passes 30,000

A 14-year-old girl was allegedly been raped by a coronavirus patient in a bathroom in India’s largest quarantine centre while his friend stood guard.

Both men and the girl had all tested positive for coronavirus, exhibiting mild symptoms, and were in quarantine at India’s largest Covid-19 centre, in Delhi.

The alleged rape took place on July 15 at the 10,000-bed facility and police say that the accused, 19, and another man, who allegedly filmed the attack, have been arrested.

It is believed the girl had only been at the quarantine centre for around a week. 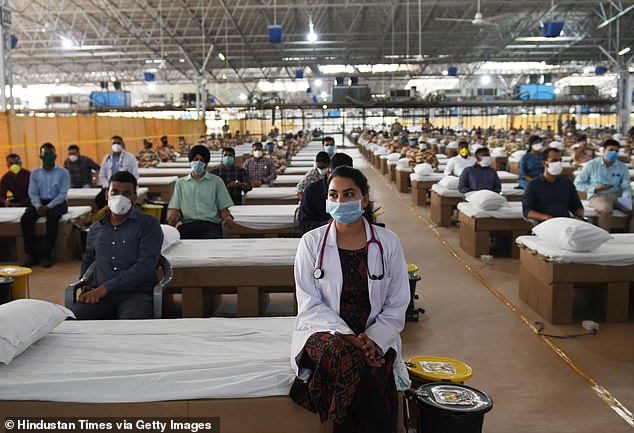 A 14-year-old girl was allegedly been raped by a coronavirus patient in a bathroom in the Sardar Patel Covid Care Centre (pictured), in south Delhi, while his friend stood guard

Police were contacted after the girl told a family member at the centre what had happened.

Speaking to The Indian Express on Thursday, senior police official Parvinder Singh said: ‘The accused have been arrested and sent to judicial custody but will remain in institutional care until they recover from the infection.

Parvinder also said that the girl was transported to a different hospital and the two men were taken to another different location where they remain in custody.

Investigations are still being carried by the police.

The latest data suggests that India has had 1,288,108 confirmed cases of coronavirus with 30,601 people dying because of the virus.

The Sardar Patel Covid Care Centre in south Delhi’s Chhatarpur is the largest facility in India and was designed to help patients who are asymptomatic or have mild symptoms and cannot isolate at home.

Despite being capable of housing 10,200 patients, only 250 beds are currently filled and of those, 30% of patients admitted are female.

The Indo-Tibetan Border Police have deployed 1,000 personnel to provide security at the centre, with around 100 working on each shift.

This comes after a doctor in Aligargh city, Uttar Pradesh, was arrested on July 22 after being charged with molesting and attempting to rape a 25-year-old woman who was recovering in an isolation ward.

Gulf News reports that 30-year-old Dr Tufail Ahmad, was arrested at a hotel where he had quarantined himself after completing his duty in the isolation ward.

The victim claims Dr Ahmad touched her inappropriately on July 21, only a day after she had been admitted to the hospital.