Australia could be one of a small number of countries called upon to improve their 2030 emission reduction targets next year according to a summary of negotiating points released by the presidency of the United Nations climate talks in Glasgow.

The document was released on Sunday morning as negotiators took a rest day after sessions continued late into the night during the first week of the talks, which are expected to conclude on Friday. 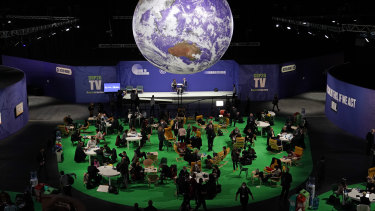 Delegates gather inside the venue on another day at the COP26 UN Climate Summit in Glasgow, Scotland. Credit:AP

Titled “Presidency summary of possible elements identified by Parties for inclusion”, it includes a bullet point emphasising that a key goal of the conference is to tighten global emission reductions by 2030, and another saying that “parties who have not yet submitted enhanced NDCs [Nationally Determined Contributions] expected to do so in 2022″.

Under the terms of the Paris Agreement, which Australia signed in 2015, NDCs are voluntary emissions reductions goals which signatories are expected to formally submit to the UN’s climate body and then improve upon every five years. This is known as the “ratchet mechanism” and is designed to steadily increase reductions goals in the hope of stabilising the climate.

Before this meeting Australia simply resubmitted the goal it first set in Paris of reducing emissions by 26-28 per cent by 2030. Nations such as the United States doubled their original goals.

Scientists say that to avoid the worst impacts of climate change the world must reduce emissions by at least 50 per cent by 2030.

Australia’s low 2030 target has been a cause of significant criticism at COP.

Should the language be adopted in a final statement it would affect countries such as Australia, Brazil, Mexico and Saudi Arabia which did not improve 2030 targets, said David Waskow, international climate director for the World Resources Institute, a US-based global think tank.

The document also emphasises that a key goal of the conference is “to keep 1.5 degrees in reach”, potentially shifting the focus of the Paris Agreement firmly towards the more ambitious goal, in line with the advocacy of a bloc of countries known as the High Ambitions Coalition, which includes many of Australia’s small island neighbours as well as much of Europe and the United States.

Some nations at COP are arguing that the ratchet mechanism should be accelerated by having nations submit improved NDCs annually rather than every five years.

Improving 2030 reductions targets has proved to be politically explosive in Australia, with Prime Minister Scott Morrison only announcing a 2050 target days before the climate talks began after exhaustive consultations with Nationals.

Waskow said in a press call that should the language in the summary appear in a final draft, it would leave significant gaps, as it would not address those nations that have marginally improved their NDCs.

The summary also suggests that progress in some negotiating tracks has been slow and difficult.

It notes “deep concern” that the goal of securing $US100 billion in finance for developing nations to green their economies as promised in Paris has never been met.