NEW YORK (AP) — The Republican Party quickly and forcefully rallied behind Donald Trump in the hours after federal agents seized classified documents from his Florida estate this summer.

Four months later, that sense of intensity and urgency was missing — at least for now — after the Jan. 6 House committee voted to recommend the Justice Department bring criminal charges against him. Leading Republicans largely avoided the historic criminal referral Monday, while others pressed to weigh in offered muted defenses — or none at all.

Republican Senate leader Mitch McConnell called for “an immediate and thorough explanation” after the FBI executed the August search warrant at Mar-a-Lago. On Monday, he told reporters he had only one “immediate observation” about the criminal referral: “The entire nation knows who is responsible for that day.” Sen. Josh Hawley, R-Mo., who called for Attorney General Merrick Garland’s resignation in the wake of the search, was silent on the committee’s referral, focusing instead on alleged FBI missteps.

Maryland Gov. Larry Hogan, a Trump critic who suggested the former president likely benefited — politically, at least — from the FBI’s summertime search, said Trump was at least partly responsible for the deadly attack on the Capitol.

“No man is above the law,” Hogan told The Associated Press shortly before the committee’s vote.

The divergent responses are a sign of how quickly the political landscape has shifted for Trump as he faces a new legal threat and mounts a third bid for the presidency. It's a marked change for a party that has been defined, above all, by its unconditional loyalty to Trump under any and all circumstances for the last six years. 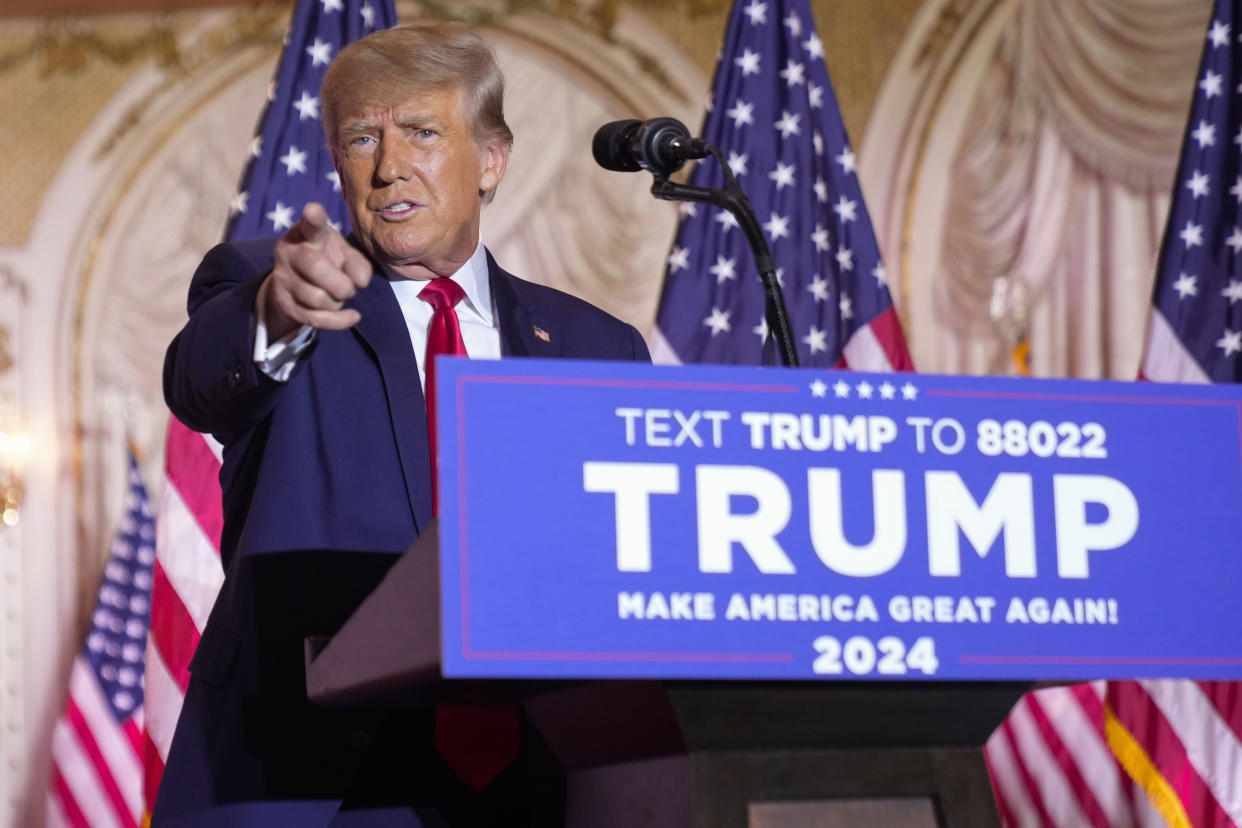 Monday’s hearing of the Jan. 6 House committee, composed of seven Democrats and two Republican Trump critics, likely marks Congress' final attempt to hold the former president accountable for the attack on the U.S. Capitol by hundreds of his loyalists as elected officials worked to certify Democrat Joe Biden's 2020 presidential election victory. The criminal referral, which is nonbinding, is the culmination of a yearlong investigation that included more than 1,000 witnesses, 10 televised public hearing and over 1 million documents.

The committee, which Republican House leader Kevin McCarthy boycotted and dismissed as a “sham process,” will formally disband on Jan. 3 as Republicans take over the House majority.

Ever defiant, Trump predicted the criminal referral would ultimately help him.

“These folks don’t get it that when they come after me, people who love freedom rally around me. It strengthens me. What doesn’t kill me makes me stronger," Trump said in a statement posted on his social network, condemning the criminal referral as “a partisan attempt to sideline me and the Republican Party.”

This week's vote comes just one month after Trump formally launched his 2024 White House campaign. He had hoped that his status as an announced candidate might give him new leverage in his many legal entanglements while warding off potential Republican primary challengers.

Such hopes have yet to materialize. Early polls suggest the 76-year-old former president is no lock to win the 2024 nomination as emboldened Republican rivals prepare to line up to run against him.

Trump bracing for potential release of his tax returns

Already weakened, Trump is also bracing for the potential release of his tax returns, which he has worked for years to keep out of the public eye. The House Ways and Means Committee on Tuesday was scheduled to consider the release of six years of Trump’s taxes, as well as those related to his businesses, although it wasn’t immediately clear when any documents might be available to the public.

Trump’s greatest liability heading into the next presidential election may have little to do with his legal challenges, however. Republicans are increasingly worried about his ability to win.

Indeed, the initial weeks of Trump's third presidential campaign are going so poorly that some Trump allies are privately wondering whether he's serious about his 2024 ambitions at all.

Trump faced Republican demands to apologize for his decision last month to share a private meal with noted white supremacist Nick Fuentes. Days later, Trump called for the “termination” of parts of the Constitution over his lie that the 2020 election was stolen. And days after that, his hand-picked candidate in Georgia's high-stakes Senate race, former football star Herschel Walker, lost his runoff election.

Trump has not held a campaign event. Last week, after previewing a “MAJOR ANNOUNCEMENT," he unveiled a line of digital trading cards depicting him as a superhero.

At the same time, Trump's legal challenges are mounting.

Garland last month appointed a special counsel to oversee the Department of Justice’s investigation into the presence of classified documents at Trump’s Florida estate as well as key aspects of a separate probe involving the insurrection and efforts to undo the 2020 election. The Fulton County, Georgia, district attorney is separately investigating attempts to overturn that state’s 2020 election results.

GOP is becoming less willing to stand behind Trump

It’s impossible to predict how much longer the investigations will last or whether the DOJ will take the unprecedented step of indicting a former president and current candidate. But Trump is no longer shielded from prosecution the way he was as president.

And his party is becoming less willing to stand behind him.

The Republican National Committee announced it would stop paying some of Trump's legal bills after he launched his 2024 presidential campaign.

Former Vice President Mike Pence, a 2024 presidential prospect himself who aggressively condemned the FBI after it seized classified documents from Trump's estate, offered somewhat muted criticism of the Jan. 6 committee when given the chance.

“As I wrote in my book, the president’s actions and words on Jan. 6 were reckless. But I don’t know that it’s criminal to take bad advice from lawyers,” Pence told Fox News Channel. He added, "When it comes to the Justice Department’s decision about bringing charges in the future, I would hope that they would not bring charges against the former president.”

“The record is clear that former Pres. Trump is responsible for what happened on January 6, but accountability is most likely to come from the American people who are ready for our country to move beyond the events of January 6,” he tweeted.

So far, only a handful of members of Congress have endorsed Trump's 2024 bid.

One of them, No. 3 House Republican Rep. Elise Stefanik, called the Democratic-led committee “unconstitutional and illegitimate.” She said Trump was well positioned heading into the 2024 presidential contest.

“As of today — he announced a few weeks ago at this point — the only candidate is Donald Trump, and he is winning significantly against the field,” Stefanik told The Associated Press on Monday. “So, we’ll see what happens. But I think he’s in a very strong position.”