Grandmother, 80, left with broken wrist after e-scooter 'hit and run'

Grandmother, 80, is left with broken wrist, cracked jaw and cheekbone after she was knocked to ground by e-scooter in ‘hit and run’

A grandmother was left with a broken wrist, a cracked jaw and cheekbone after she was knocked to the ground by an e-scooter in a suspected hit-and-run.

Sarah Carter was crashed into by a rider as she walked along the pavement.

The 80-year-old was going to a shop near her home in Canterbury, Kent, when the accident happened on July 1, which sent her flying.

She said she was crashed into by a young man riding a Bird rented e-scooter and is now calling for the city-wide trial scheme to end before a pedestrian or rider is killed.

Witnesses said an e-scooter rider came flying out of the entrance to flats that sit above a nearby Sainsbury’s store.

Retired university librarian Ms Carter is now at home recovering from her injuries following the incident near Canterbury West station.

Riders of e-scooters for hire in the UK must generally be over 18 and hold at least a provisional driving license. 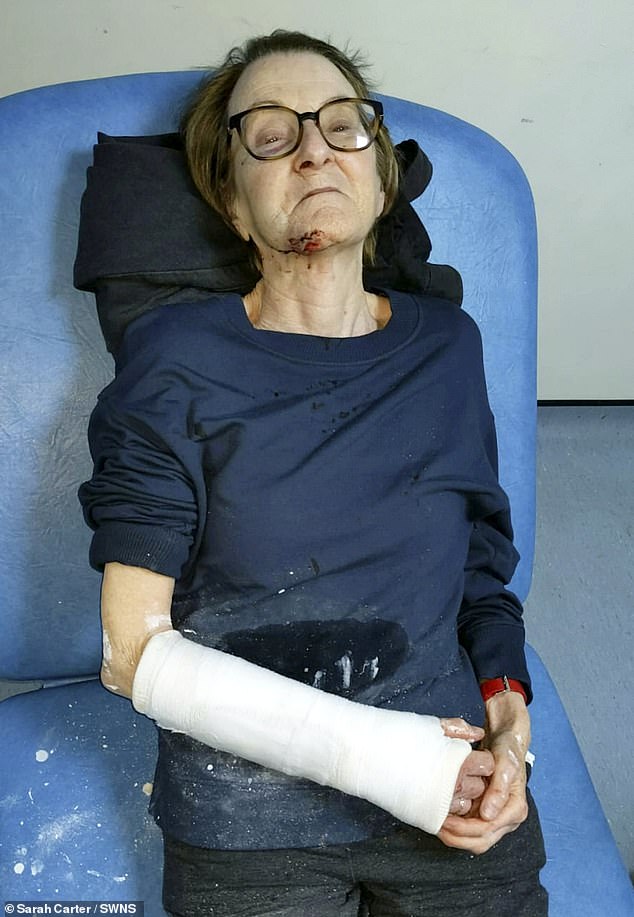 Sarah Carter, 80, while in hospital after requiring surgery on her broken right arm 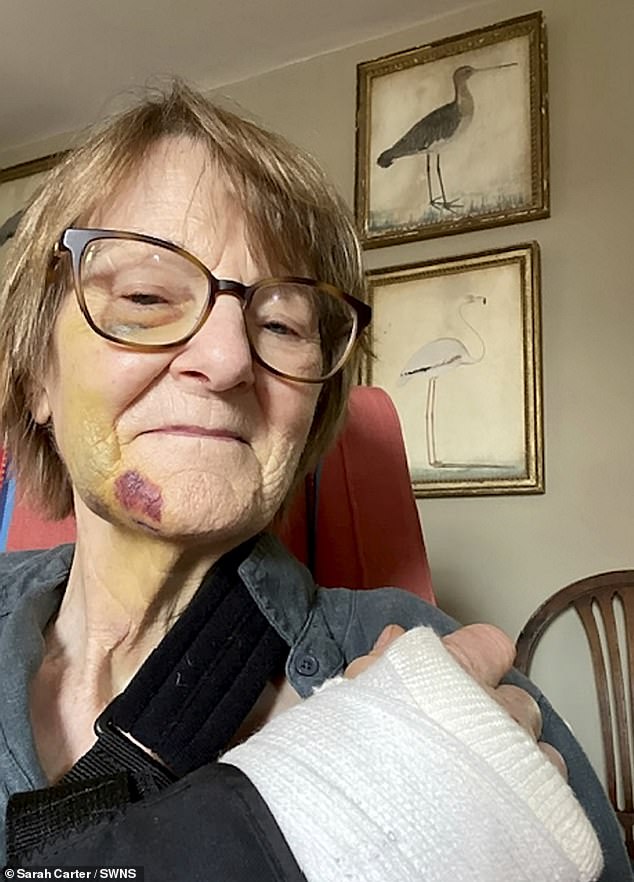 Ms Carter is a mother of two and grandmother to four. She was on her way to a local shop when the collision occurred 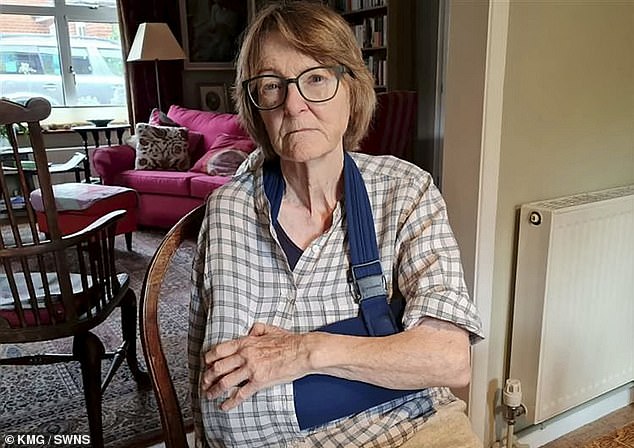 Ms Carter said: ‘I was sent flying to the ground and it’s only fortunate that I’m very fit for my age and did not suffer a broken hip or head injury.

‘But it has left me in a lot of pain and I’m not confident I will get back to where I was before.

‘Another elderly person could have quite easily been even more seriously injured or even killed.

‘I remember looking up to see a young man who mumbled some apology.

‘But when others gathered around and came to help me, he vanished.

‘I am very grateful to those who did come to my aid, including a doctor who happened to be passing.’

The grandmother-of-four was taken by ambulance to the William Harvey Hospital in nearby Ashford, where she spent a total of eight hours in hospital, including four hours in A&E having her injuries assessed and undergoing surgery.

She now has a heavy cast on her right arm and is having to make costly return visits to hospital by taxi.

Mother-of-two Ms Carter added: ‘I can’t write properly or draw, let alone do my garden, which is making life very frustrating and I expect to continue to suffer in the longer term.’

Bird’s e-scooters can travel up to 15mph but there are variable limits around the city.

In March it was confirmed Bird’s e scooter trial has been extended by Kent County Council until November.

But Ms Carter said the scheme needs a re-think and branded the e-scooters ‘lethal’.

She added: ‘Although I can see the possible environmental benefit, the scheme is just not working.

‘No infrastructure has been put in place and it’s just irresponsible of the county council.’

Bird, the company that is running the trial e-scooter scheme in Canterbury, said the rider was immediately identified and blocked from using the service. 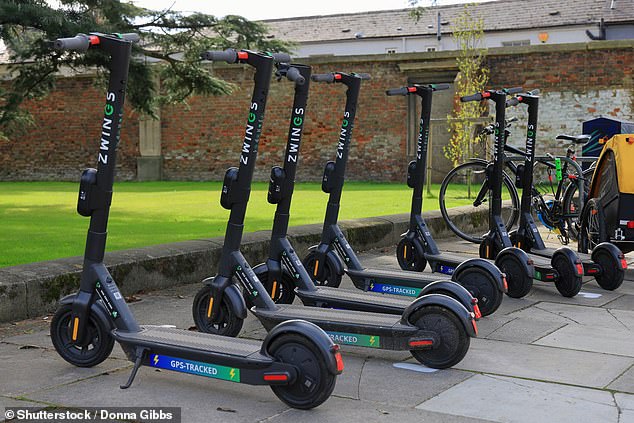 E-scooters can be hired in many UK cities including London, Birmingham and Cambridge (Pictured: E-scooters in Cheltenham, Gloucester from firm Zwings) 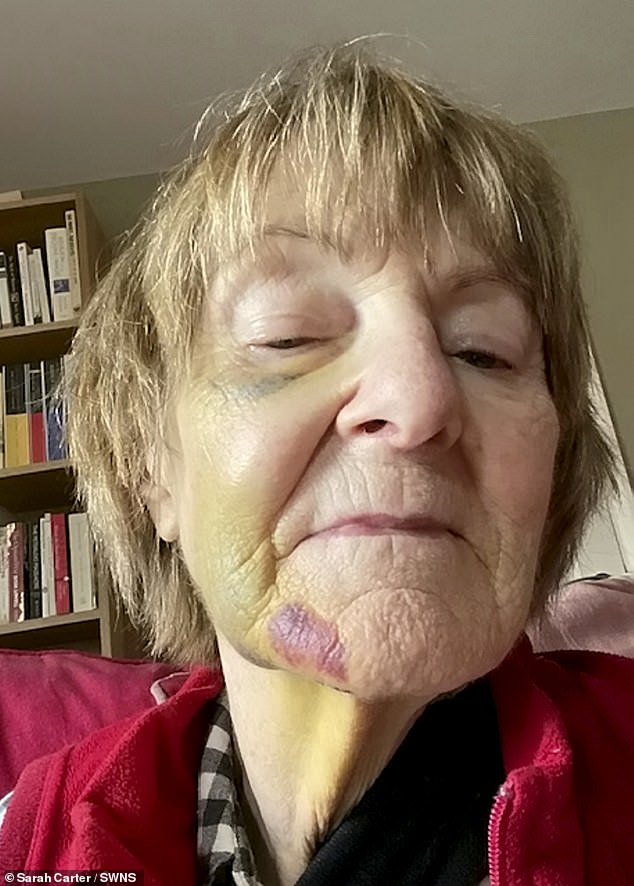 Bird, the company that is running the trial e-scooter scheme in Canterbury, said the rider was immediately identified and blocked from using the service

A spokesman for the firm said: ‘Our thoughts are with the individual who was injured as we continue to work closely with them and our city partners to provide the support needed at this time.

‘Whilst one incident is too many, we estimate that one in five eligible Canterbury residents have ridden our scooters since the trial started almost two years ago and safety incidents remain extremely rare.

The company said it is working with police to share the details of the rider and Kent Police is aware of the incident and officers are investigating.

A Kent County Council spokesman added: ‘Officers have been made aware of a collision within the electric scooter trial zone in Canterbury and our thoughts are with the person who was injured.

‘After liaising with the Department for Transport, we continue to work with our partner Bird, which provides the vehicles for this trial, to ensure warnings to drivers are clear and breaches are taken seriously.’

In November 2020, an e-scooter rider crashed into a woman from behind on the pavement less than a mile from where Ms Carter was struck, leaving her with a broken leg and arm.

Politics student Joshua Mpia, 19, was charged with causing serious injury by dangerous driving and driving without a licence and given a suspended prison sentence.

He was riding a personally-owned machine that is not allowed to be ridden on the road or pavement, unlike Bird e-scooters that have special dispensation to do so. 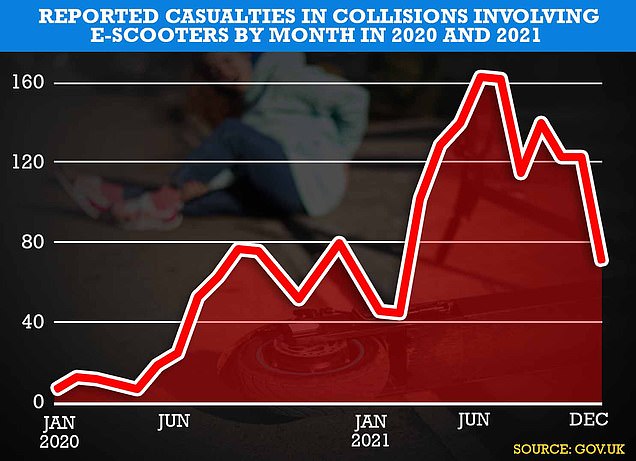 What are the laws on e-scooters?

Renting an e-scooter is the only way to legally ride the vehicle on some public roads or in other public place at the moment.

But the controversial vehicles could be approved for use across the UK following a trial period. Currently, 10 London boroughs are taking part in the scheme with three providers to test how e-scooters work on the capital’s roads.

Riding e-scooters on the pavement however is banned, and riders must be 18 or over and have a full or provisional driving licence to rent one.

It is also illegal to use privately owned e-scooters or other powered transporters on public roads.

Relevant laws on e-scooter use include:

On public roads, anyone using a privately owned e-scooter or other powered transporter is likely to be committing at least one of a number of offences such as driving a motor vehicle with no insurance. You could be liable for a fixed penalty of £300 and six points on your driving licence

On pavements, it is generally an offence to drive a motor vehicle, and this applies at all times to e-scooters and powered transporters

E-scooters rented from the TfL scheme will be permitted to ride on London’s public roads and cycle infrastructure in participating boroughs.

These boroughs will designate no-go areas where e-scooters cannot be ridden and will come to a safe stop, as well as go-slow areas, where the speed of e-scooters will be reduced to 8mph