A Gurkha veteran staging a hunger strike in Westminster has been rushed to hospital after reportedly having a heart attack.

Dhan Gurung, 60, is believed to have had a minor heart attack after 11 days without food outside Downing Street.

But the former soldier is said to still be refusing to break his hunger strike, which he is doing to protest pension rights.

The group of Nepalese-born soldiers are campaigning for equal pensions for Gurkhas who retired before 1997 and are not eligible for a full armed forces pension.

The Support Our Gurkhas protesters reached their 12th day of not eating today, while demonstrating opposite Downing Street.

It comes after it emerged on Monday there are no plans for Boris Johnson to meet the veterans. 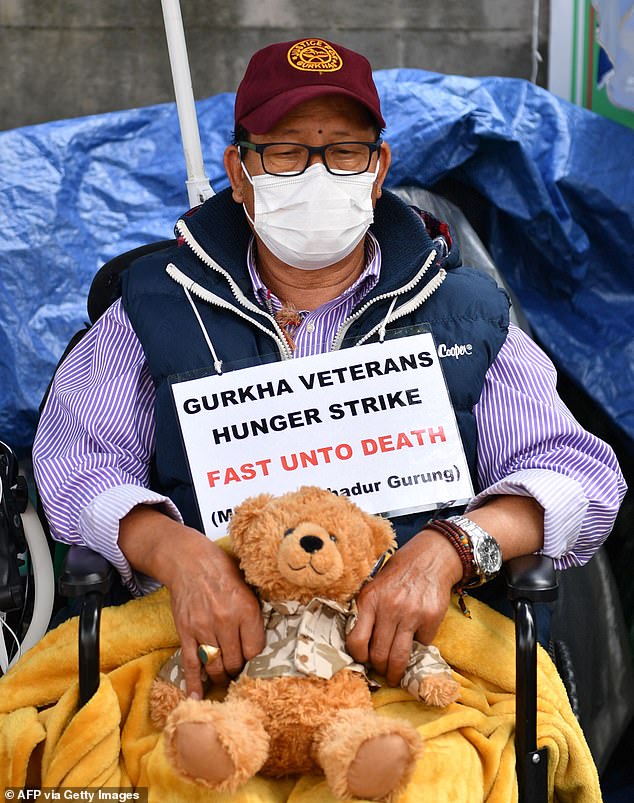 Dhan Gurung (pictured), 60, is believed to have had a minor heart attack after 11 days without food 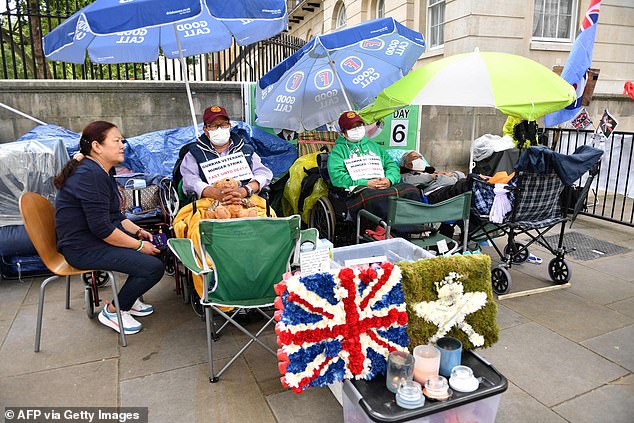 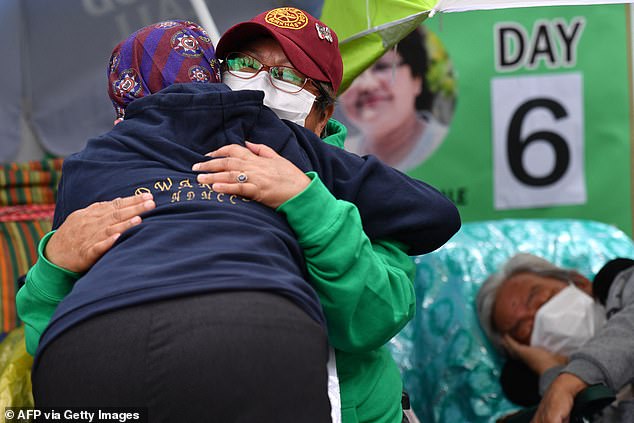 The Prime Minister’s spokesman was asked whether any talks were planned after the protesters said they would end their hunger strike if a meeting was arranged.

He said: ‘I believe the Defence Secretary said that he would be happy to meet with any Gurkha.’

The spokesman added that there were ‘no plans’ for Mr Johnson to join a meeting.

On Friday, Defence Secretary Ben Wallace said he was happy to meet protesters, but warned no government ‘of any colour’ had ever made retrospective changes to pensions like the ones the demonstrators are calling for.

Actress and campaigner Joanna Lumley urged the Government on Saturday to meet the ‘brave and loyal’ veterans ‘to address the injustices highlighted’.

The 75-year-old, who in 2009 led a campaign to allow Gurkhas settlement rights in Britain, was born in India and moved to England as a child. Her father was a major in the Gurkha Rifles. 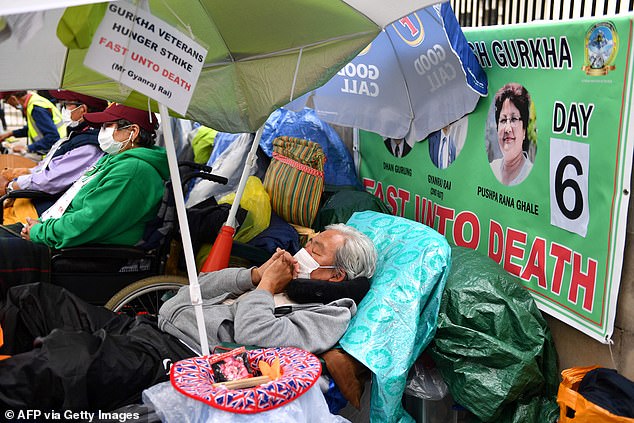 Change was brought in after an amendment to immigration rules in 2007, backdated to July 1997, meant more retired Gurkhas were likely to settle in the UK on discharge, whereas the previous pension scheme had lower rates 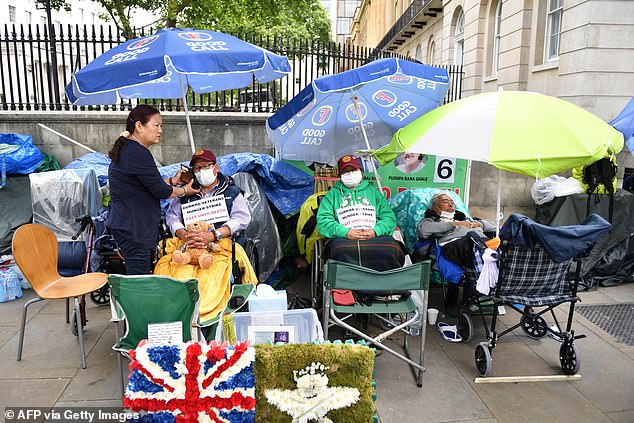 Dhan Gurung also said he and his fellow demonstrators had been ‘harassed’ by police, who then dismantled a gazebo

‘Only a deep sense of injustice could drive these brave and respectful souls to this point,’ the Absolutely Fabulous actress said.

‘At the heart of this matter is how we value those who have offered, and sometimes given, the ultimate sacrifice to protect our way of life and to keep us safe.’

Around 200,000 Gurkhas, recruited from Nepal, fought in both world wars, and they have also served in places such as Hong Kong, Malaysia, Borneo, Cyprus, the Falklands, Kosovo, Iraq and Afghanistan.

Those who served from 1948 to 2007 were members of the Gurkha Pension Scheme until the Labour government of the time eliminated the differences between Gurkhas’ terms and conditions of service and those of their British counterparts.

Serving Gurkhas, and those with service on or after July 1 1997, could then opt to transfer into the Armed Forces Pension Scheme.

The change was brought in after an amendment to immigration rules in 2007, backdated to July 1997, meant more retired Gurkhas were likely to settle in the UK on discharge, whereas the previous pension scheme had lower rates as it had assumed they would return to Nepal where the cost of living was significantly lower. 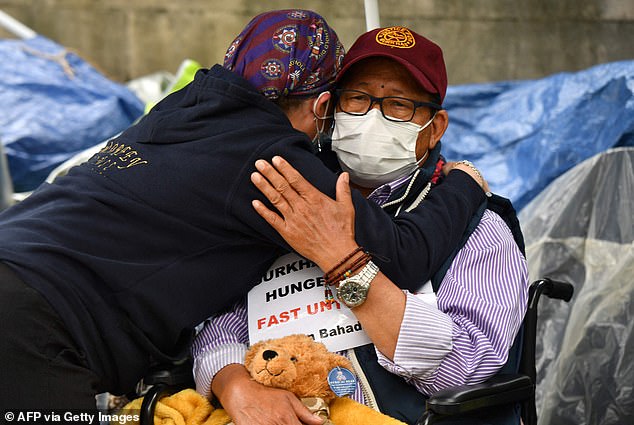 Gurkha men, recruited from the rugged Himalayan country of Nepal, have a reputation as hard and loyal fighters, and are known for the trademark curved kukri blades they carry sheathed on their belts 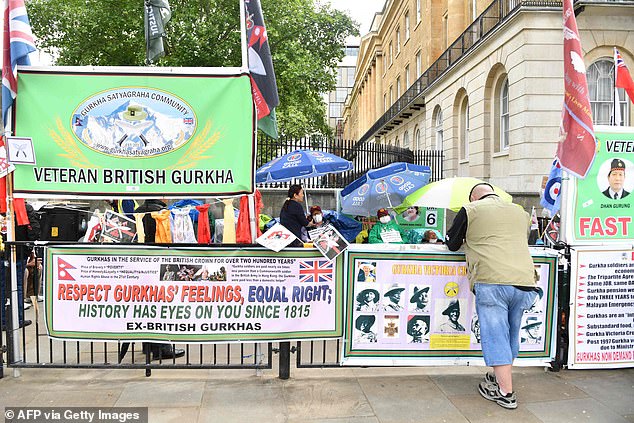 Leo Docherty, minister for defence people and veterans, has said the group (pictured last week) has refused to meet him

Mr Wallace told Sky News on Friday: ‘I am very happy to meet any Gurkha. My father fought alongside the Gurkhas in Malaya in the 1950s, it is a pretty remarkable group of people.

‘The group of people currently protesting are groups affected by the change by the Labour government in 1997 to 2003. This was about people who are under a 1947 pension, it is a very small group of Gurkha pensioners, they had different advantages in their pension scheme in that old scheme.

‘That is not the same as the Gurkhas of today or the Gurkhas after 2003 – they get exactly the same pensions as British serving personnel.’

Leo Docherty, minister for defence people and veterans, has said the group has refused to meet him.

He said: ‘I was disappointed the Satyagraha protest group declined to meet with me and hope they will engage positively in the Gurkha veterans dialogue the Defence Secretary hosts in early September.

‘We greatly value the contribution that Gurkhas make and consider the 1948 Gurkha Pension Scheme to be objectively fair and equitable, but I am always willing to speak with veterans and help resolve any such welfare concerns.’