England captain Harry Kane invites fan with Down’s Syndrome, 16, to be the Spurs mascot after vile trolls attacked her online when her dad tweeted footage of her dancing at the team’s stadium

England captain Harry Kane has invited a 16-year-old Tottenham Hotspur fan to be the team’s mascot after social media trolls attacked her dancing.

Ella Markham, of Banbury, Oxfordshire, was mocked over the video filmed at the team’s stadium in North London following the 1-0 defeat to West Ham on Saturday.

But her hero Kane, 25, has now sent a personal video message inviting her to be the mascot at the final Premier League match of the season against Everton on May 12. 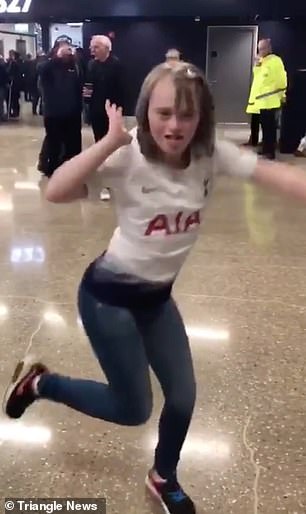 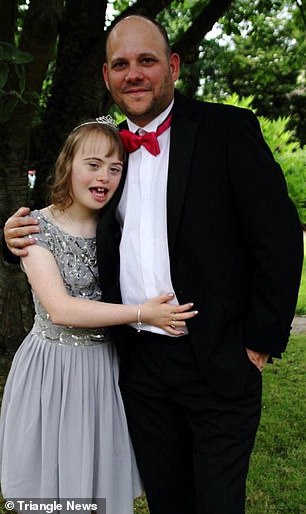 Ella Markham, 16, of Banbury, Oxfordshire, was mocked over the video (left) filmed at the Tottenham Hotspur Stadium in London, uploaded to Twitter by her father Neil (right, together)

He told her in the heart-warming clip: ‘Hi Ella, I’ve seen the video of you dancing at the Spurs game. I just want to thank you for your amazing support. I loved it.

‘Obviously we know your family are proud of you as well. We know you are a big fan. 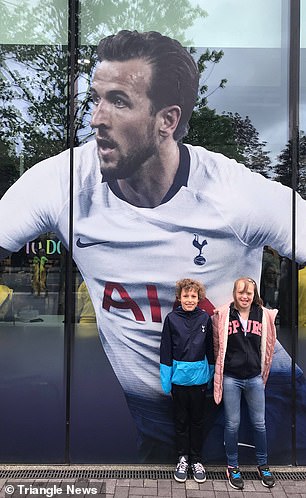 Ella, 16, stands with her brother Danny, 11, in front of a picture of Spurs striker Harry Kane

‘We’d love you to come down and be the mascot for the last game of the season against Everton. Hope to see you there. Keep dancing, keep doing what you are doing. Lots of love.’

Her proud father Neil, 43, who had been bombarded with abuse over the video of his daughter, was sent the clip of Kane from Spurs via WhatsApp yesterday.

He said: ‘This has made my daughter’s day after a horrific weekend. She was really, really excited when she saw it.’

Mr Markham added: ‘Obviously we are going to take them up on the offer.’

Yesterday, Ella warmed hearts across Britain when she told her father she loved him live on ITV’s This Morning as they discussed the online abuse.

Mr Markham, also father to Danny, 11 and Ryan, 26, had responded to the abuse by putting his phone number online and challenging trolls to speak to him directly.

He revealed one person did call him but all they did was hurl more abuse his way – and called for the trolls to be banned from every football ground in the country. 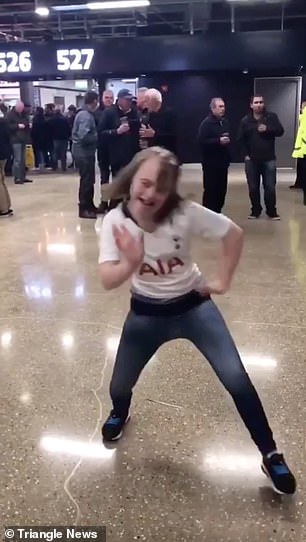 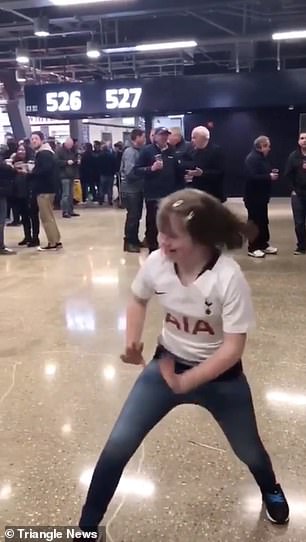 The video of Ella on Saturday has been viewed more than 1.8million times and got 26,000 likes

And Ella interrupted presenters Phillip Schofield and Holly Willoughby to say ‘I love my daddy’ after previously telling them music and dancing was her passion.

Mr Markham has also had 20,000 messages of support from friends and strangers, while Tottenham pledged to ‘take appropriate action’ against any fans involved.

The presenters also heard on the programme how Ella’s dream job is to be an X Factor judge and pledged to take the teenager to a show in the next series.

She said how she loves Kane because ‘he is my hero’. Ex-Spurs players Graham Roberts and Micky Hazard have also sent messages of support to her father.

The video of Ella has been viewed more than 1.8million times, got 26,000 likes and he has had nearly 8,000 messages in support.

It was originally posted on Saturday at 3.45pm with the caption: ‘The result is never the most important thing #COYS.’