A beachfront compound in Hawaii where former President Barack Obama reportedly plans to retire has used a planning loophole to retain a seawall that is likely causing beach erosion, according to ProPublica.

State officials and community members told the outlet that Obama plans to reside in the $8.7 million compound on Oahu's Waimanalo Beach, which was purchased by his close friend Marty Nesbitt in 2015. 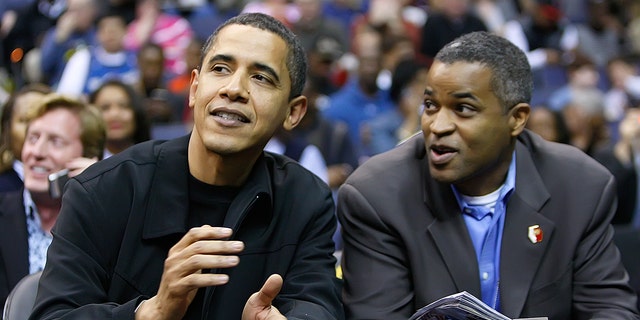 President Barack Obama talks with his friend Marty Nesbitt at the Chicago Bulls vs Washington Wizards basketball during their game played at the Verizon Center in Washington, D.C., Friday, February 27, 2009. (Photo by Harry E. Walker/MCT/Tribune News Service via Getty Images)

Permits obtained by ProPublica reportedly show that developers are building three homes, two pools and a security perimeter on the property after tearing down the site's mansion, which was famous for being the house from "Magnum, P.I."

However, a century-old seawall is set to remain thanks to a loophole that allowed the sellers to obtain an easement on the seawall for a one-time payment of $61,400, despite environmental experts who warn it could cause coastal damage and beach erosion, according to ProPublica.

The easement, reportedly acquired through Hawaii's Department of Land and Natural Resources, allows developers to essentially lease the public land that sits under the seawall for the next 55 years.

An investigation by the Honolulu Star-Advertiser and ProPublica found that state officials have awarded seawall easements to more than 120 property owners over the past two decades. They include business and real state executives from Hawaii, the mainland U.S. and Japan, a former Honolulu City Council chairman, and a former managing director of a large hedge fund. Some have paid hundreds of thousands of dollars to bypass rules designed to protect the public shoreline.

In addition, building permits show that developers are pursuing an expansion of the seawall. Local residents have noted that the existing beach along the property has nearly disappeared, according to the ProPublica report.

According to research from Hawaii's School of Ocean and Earth, Science and Technology, however, multi-agency seawall building on eroding shores approved by the state has resulted in the loss of one quarter of beaches around the island of Oahu.

"Had city, state, and federal staff operated in an integrated fashion, focused on a single over-riding policy to ―to protect and preserve the natural shoreline, this unconscionable level of environmental destruction probably would not have happened," researchers wrote.

Nesbitt, now chair of the Obama Foundation board and co-CEO of a Chicago-based private-equity firm, told ProPublica in a written response to questions that the steps he’s taken to redevelop the property and expand the seawall are “consistent with and informed by the analysis of our consultants, and the laws, regulations and perspectives of the State of Hawaii” and that any damage the structure caused to Waimnalao Beach occurred decades ago and "is no longer relevant."