A HEARTBREAKING photo shows the moment a cruel owner dumps their dog in 37C heat and drives off – leaving the dog to chase desperately after the car.

The image was captured by a local resident on the outskirts of Melbourne, Australia on Sunday morning. 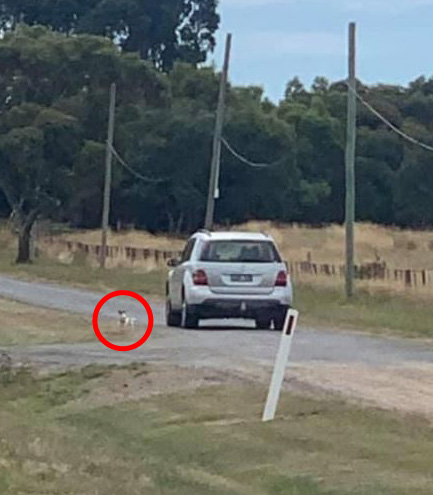 Nicole Crossley, who lives in the suburb of Mickleham, said she was mowing her lawn at around 11am when she saw a 4×4 pull up at a nearby crossroads.

She then saw the driver leave the dog – thought to be a Jack Russell – on the side of the road before driving away.

She said the dog chased the car for a stretch up the road but wasn't able to catch it, and that she was then unable to track down the dog.

Writing on a Facebook group for missing pets, Crossley said: "The poor little one chased and kept up with car for a while on foot, but I lost sight of it after it approached the bend.

"I’ve just spent the last hour in the car and on foot trying to find the poor little dog to no avail."

The photo was captured from a distance of around 100 metres and the car's number plate can't be made out, though it is thought to be a mid-late 2000s Mercedes Benz L Class.

Crossley is now appealing for help finding the driver, while her post has been shared over 1600 times.

Reacting to it, one user said: "This makes my blood boil."

Another said: "So sad, especially with the heat today. If only they just handed the little guy over to someone instead of just dumping him."

A third added: "Poor dog. I hope a better home is not too far away."

Animal rights law in Australia prohibits the abandonment of a species usually kept for a domestic purpose.

RSPCA Victoria said it had been made aware of and was looking into the incident.

A spokesperson told the Mail: "Abandonment of an animal comes with many dangers to their life, such as being exposed to road accidents, or being unable to access food or water.

"It also exposes them to the elements, such as extreme heat, which can result in heat stress or heatstroke.

"RSPCA Victoria urges pet owners who may no longer be able to look after their animals to surrender them to an animal shelter, where they can be cared for and found a new, loving home."