Home » World News » ‘Her vision was blurry’: the mother-daughter duo who conquered Everest

‘Her vision was blurry’: the mother-daughter duo who conquered Everest

Educator Jane Kanizay has four kids; Gabby Kanizay is the self-confessed “naughty one” who has always pushed boundaries. In May, with her mum by her side, Gabby became the youngest Australian to climb Mount Everest. 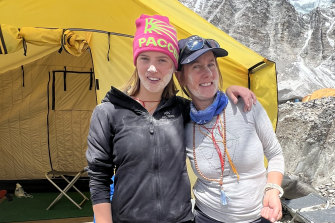 “Gabby is more confident than I am. She’s taught me I have to believe in me more – because she does.”Credit:Courtesy of Jane Kanizay

JANE: I’ve got a photo from when Gabby was born, with the umbilical cord still attached. I just remember the love. She’s the second of my four children [aged 14, 17, 19 and 21] – my full-on, outgoing one who’d always push the buttons. If we went indoor climbing, she’d have to touch the roof.

At 14, Gabby had a chat with her dad about goals and said, “One day, I want to climb Everest.” He said, “Why don’t you start now? Take your mum and go to base camp.” We decided to do a series of trips, climbing higher and higher mountains, until she was ready at 17 for Everest.

“It takes a narcissistic parent to push their child into this. Am I doing the right thing?”

We climbed Tibet’s Cho Oyu [the world’s sixth-highest mountain] in September 2019 and were about to leave for Everest in March 2020 when everything got cancelled. But going at 19 made a huge difference. I worried a lot when she was 17. I thought, “It takes a narcissistic parent to push their child into this. Am I doing the right thing?”

For me, the climb was physically more challenging, and emotionally I was hurting because my marriage broke down last year. I cried a lot – and I was scared. We passed two bodies and that was unnerving. I was less worried about Gab dying because I knew she was so capable, but I worried about how long it was going to take me. I’m a cautious thrill-seeker. 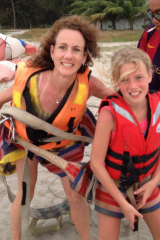 Gabby, the second of Jane’s four children, is her “full-on, outgoing one who’d always push the buttons”.

Gab even mastered the pee funnel – a portable girl’s penis – whereas I did the pregnant lady’s squat. Gabby would go, “I don’t know how you can aim into that bottle.”

When we got to Camp 4 [the last camp before the final climb], I was thinking, “I don’t have time to recover before I leave for the summit tonight.” Gabby gave me a serve: “We’ve trained forever for this. Why are you being so negative?” After a sleep, it was like, “Thanks for the pep talk, Gab.” The roles had reversed.

For the summit push, the chance of coordinating our arrivals was slim. Gabby left three hours after I did and got up there in seven; I took 10. When I was about an hour away from the summit, though, I saw Gabby coming with her three Nepalese guides and my heart just burst. We did the last push together, reaching the top for sunrise at 4.30am in still, perfect weather. I looked at her and thought, “You’re still my baby-cheeked little girl.”

We have the same adventuring spirit, but I’m a rule-follower; Gab and her dad are not. Before we left, she told me, “Don’t be the angry feminist in the mountains. Don’t make enemies with the men in our team.” On the flip side, she can pick sexism, even in our family. I was having a rant once – “I don’t know how I could be a feminist when I’ve been a stay-at-home mum for 10 years” – and she said, “That’s what a feminist is, Mum. You made a choice.” She’s more confident than I am. She’s taught me I have to believe in me more – because she does. 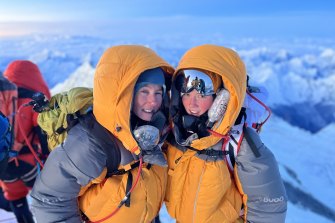 Jane and Gabby at Everest’s summit earlier this year.Credit:Tendi Sherpa

GABBY: As a kid, I was very loud and very good at getting what I wanted. I was the naughty child, sneaking out, drinking. Dad was always working and Mum was always at home, but she has proved she’ll literally go to the ends of the earth and put herself through hell for us kids to live out our dreams.

I love how kind her heart is. She volunteers with refugee women, teaching them English, and works with kids with dyslexia and other learning difficulties. When I was 16, some girls at school weren’t being very nice. I’d come home early most days and have a cry and cuddle with Mum. She’d make it better.

We’ve always been close, but the mountains made us closer. You share a tent, so we’d stay up giggling, telling stories. There’s nothing she doesn’t know about me and I know a lot about her. It’s more of a friendship up there because she doesn’t do my laundry or cook for me; she’s not telling me off.

“She’d put her oxygen bottle on the wrong setting and run out. I was so scared.”

Mum found Everest really tough. At one point she said, “I’m done. This is your dream, not mine.” I remember asking, “Do you even like mountaineering?” because it’s supposed to be hard. That’s why we do it – because we love pushing our limits. I said, “Every time I express how awesome this is, you shoot me down with negativity.” When she left for the summit later that day, I just gave her a big hug, “Good luck. Love you.” When we reached the summit together, the bickering didn’t matter. I was so proud of her. She smashed it. 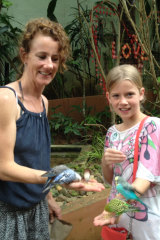 Jane and Gabby share an adventurous spirit. “She had a motorbike licence and backpacked across Asia, so she was kind of badass. She still is.”

On the way down, her vision was blurry for about 12 hours [presumably because of the altitude]. We slept another night at Camp 4 because I was climbing [Everest’s neighbour and the world’s fourth-highest mountain] Lhotse the next morning and Mum was exhausted. I woke up to her saying, “I need to clean the tent to separate the dreams.” I was like, “You’re going crazy.” She’d put her oxygen bottle on the wrong setting and run out. We changed the bottle but I was in tears; I was so scared. I only got two hours’ sleep that night.

Before we left for Everest, I was like, “Look, it’s mountaineering: there’ll be alpha males. I know it’ll piss you off, but I don’t want you pulling up every second person; it’ll just get awkward.” She’s had to deal with the patriarchy her entire life, whereas I know a lot of respectful guys. Mum’s feminism is more hardcore.

Last year was very difficult with Mum and Dad separating while I was finishing year 12. We’d go for walks most days and talk about everything, but then I was like, “I don’t want to be the support anymore. It’s not fair.” I actually didn’t see her for more than a month. Before the trip, I said, “I get it. It’s a big deal. But it can’t affect Everest.” But it did. A lot. She needed a win because she was feeling pretty beaten down. It’s boosted her confidence.

We’ve been on five mountain-climbing trips together now. She was a huge adventurer growing up, skydiving, scuba-diving. She had a motorbike licence and backpacked across Asia, so she was kind of badass. She still is.

To read more from Good Weekend magazine, visit our page at The Sydney Morning Herald, The Age and Brisbane Times.