Former employees of a high-profile Toorak-based real estate agent claim he was a secret director of syndicates that bought two development sites on Melbourne’s outer fringes that he or his company were selling, in an alleged breach of the law.

The six former agents alleged in documents filed in the Supreme Court last year that they had been part of a number of property-buying syndicates guided by Manpreet Dandiwal, who heads PSP Property Group, but that they had not received the agreed profits from the deals. The case was dismissed in February after an out-of-court settlement. 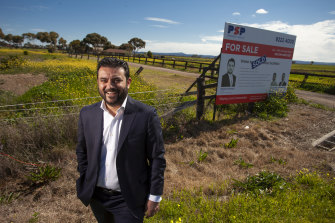 ‘Everything I touch turns to sold’: Manpreet DandiwalCredit:Eamon Gallagher

Under Section 55 of Victoria’s Estate Agents Act 1980, it is an offence for an estate agent or an agent’s representative to obtain a beneficial interest in a property that they have been commissioned to sell. The only way for an agent to avoid breaching these rules is to have written consent from the vendor and to not claim a commission from the sale.

The documents contain allegations that Mr Dandiwal was the “guiding mind” and “shadow director” of groups which had covertly bought two packages of land. The sellers of the two properties have confirmed Mr Dandiwal and his PSP company received hefty commissions on the sales, including more than $250,000 for one property.

Through his lawyer, Ben Waterson, Mr Dandiwal said The Age had been given misleading information and that the allegations in the statement of claim had no validity as the case had been dismissed.

The allegations come after Mr Dandiwal was arrested and charged with serious assault after a brawl involving more than 10 men at a Bulleen park in September, where he and two PSP employees, who are also his nephews, clashed with some of his former staff. He has previously said he was acting in self-defence and that he will vigorously defend the charges.

Rural land on the city’s boundary can become extremely valuable if it is rezoned to allow suburban subdivisions. Mr Dandiwal claims to have negotiated sales of $3 billion in the past decade, and has adopted as his motto, “everything I touch turns to sold”.

In their statement of claim, the six real estate agents say their former boss participated in a syndicate buying development-ready properties in Rockbank, Melton, Wollert, Plumpton and Mount Cottrell.

They allege a WhatsApp group including Mr Dandiwal was created to discuss buying one property on Melbourne’s outer northern fringe through a company called Wollert Springs Co Pty Ltd. The agents claim Mr Dandiwal advised that the syndicate would own half the property and a second businessman would own the remainder. Mr Dandiwal had instructed that the money for the transaction be deposited into the account of a third businessman, the documents allege, who is a director of Wollert Springs Co Pty Ltd.

Land title records confirm a company called Wollert Springs Co Pty Ltd placed a caveat over the outer-northern land in April, 2017. It is due to make the final payment and take ownership of the property early next year, according to the statement of claim.

Online real estate listings from the time show Mr Dandiwal was the agent for the property. The property’s vendor, who asked not to be identified, confirmed to The Age that Mr Dandiwal had approached him about listing his land in early 2017. The vendor said Mr Dandiwal had been the agent on the sale and had received a commission of more than $250,000. The seller said he was not aware of the allegations Mr Dandiwal had been part of a syndicate allegedly involved in the purchase of his property.

The Real Estate Institute of Victoria said it was aware the dispute between Mr Dandiwal and his former agents had been the subject of court proceedings.

“As a result, we won’t be providing any commentary other than to say that as part of holding membership with the institute, agents are expected to abide by the REIV’s Code of Conduct in addition to the Estate Agents (Professional Conduct) Regulations,” a spokeswoman said.

Mr Dandiwal’s former agents stated in their claim that they invested large sums of money in at least five other properties identified by Mr Dandiwal in 2017 and 2018, but that they had not received their share of the profits. WhatsApp groups were created to arrange each deal, they said.

Although Mr Dandiwal’s name does not appear as a director or owner on the companies which have purchased the properties, his former agents claim the people listed as owners or directors were in effect proxies who acted according to his instructions.

The statement of claim identifies two business people as co-investors in several properties discussed by Mr Dandiwal’s alleged syndicate via WhatsApp. One of those properties was in Brookfield, near Melton in Melbourne’s outer-west. Old online listings show the property was sold in October, 2018 for $5.5 million with Mr Dandiwal’s PSP Property Group as the selling agent. The property owner has confirmed this.

In their claim, the former agents allege Mr Dandiwal had approached them a month earlier, in September 2018, about investing in a half share of the Brookfield property. The agents alleged a WhatsApp group was created to discuss investment amounts, with Mr Dandiwal instructing them where to deposit their money.

A company directed by two alleged associates of Mr Dandiwal then entered into an agreement with the vendors of the property to buy it, and land title records show that company placed a caveat over the property shortly after the 2018 sale agreement.

The same two alleged associates of Mr Dandiwal also own another company through which a property in Mount Cottrell was to be purchased for $9.9 million, with a settlement date in 2023.

Land title records show that the company placed a caveat over the Mount Cottrell property in mid-2017. Once again, according to the statement of claim, a WhatsApp group was created and the investing agents were instructed by Mr Dandiwal to deposit money into the bank account of one of the company’s directors.

In his filed defence, Mr Dandiwal denied ever being the “guiding mind” or “shadow director” of a syndicate investing in properties. He admitted proposed investments were discussed via a WhatsApp group but denied they proceeded as outlined in the statement of claim.

The lead plaintiff in the abandoned civil case, real estate agent Talwinder Singh Dahiya, said he could not discuss the terms of the out-of-court settlement. Justice Jim Delany made no order on costs.

Consumer Affairs Victoria, which is responsible for the licensing of estate agents, said it could not comment on individual cases.