High Street gears up for big April 12 reopening: How John Lewis will let customers into fitting rooms for first time in 12 months, Primark is extending hours to 10pm while IKEA will run staggered entry system

Retailers from John Lewis to Poundland and Primark to Ikea today confirmed reopening plans for next Monday as shoppers look forward to a return to in-store browsing at non-essential stores after more than three months.

John Lewis outlined its plans for April 12 for its remaining 32 shops in England, which include customers finally being allowed to have their children’s feet measured for shoes and the reopening of technology support desks.

Fitting rooms will be reopen for the first time in a year, ‘customer service hosts’ will manage numbers of people entering and a returns process will involve new drop boxes and the quarantining of returned stock for 48 hours.

Ikea, which will also be reopening stores across England and Wales from next Monday, said safety measures will include a staggered entry system to enable social distancing, hand sanitiser facilities and more frequent cleaning.

Primark will be offering extended opening hours to as late as 10pm across stores with the aim of reducing queues, while Poundland is reopening more ‘hibernating’ shops and plans to open more new stores in the next six months.

Meanwhile new data from retail experts Springboard released today found that footfall across UK retail destinations was up 8.5 per cent over the period of March 28 to April 3 compared to the week before.

High streets and retail parks saw footfall increase by 9 per cent and 9.7 per cent respectively, while in Central London and other large cities footfall was three times as great as it had been over Easter last year.

It follows a torrid year for the retail industry which has seen almost 190,000 jobs lost since shops were first forced to shut their doors a year including major collapses by Debenhams and the Arcadia Group. 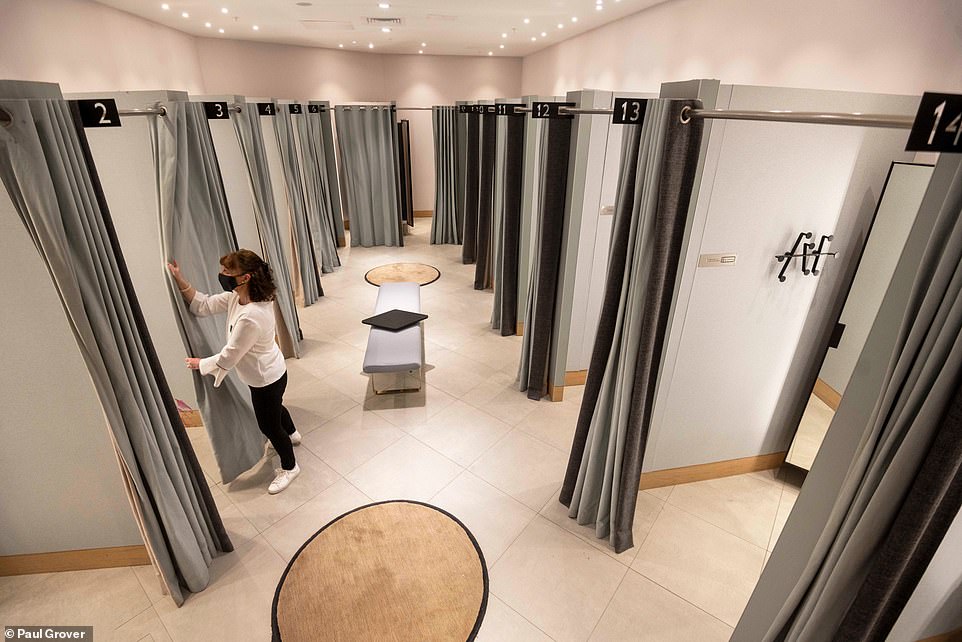 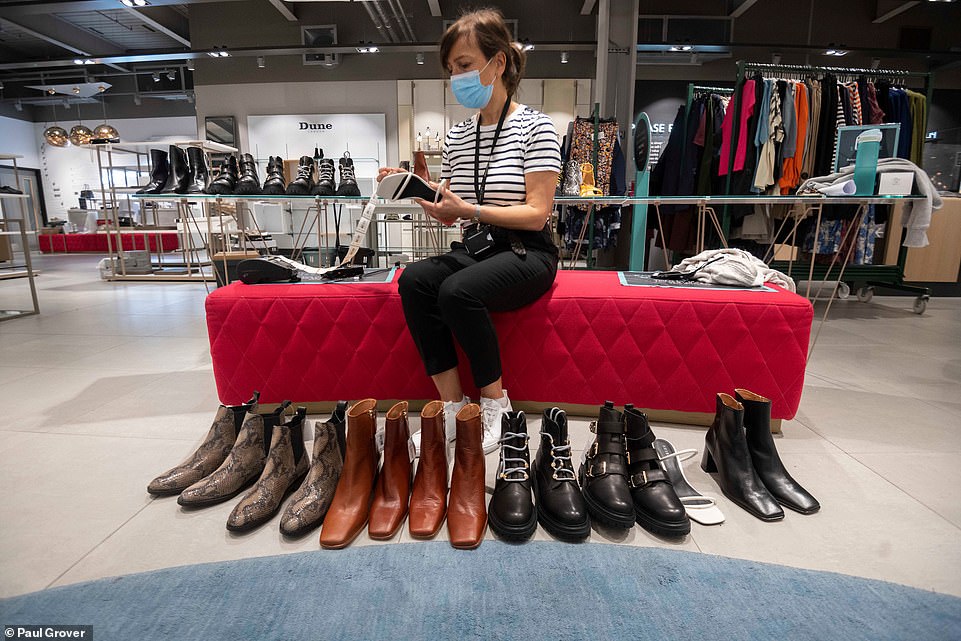 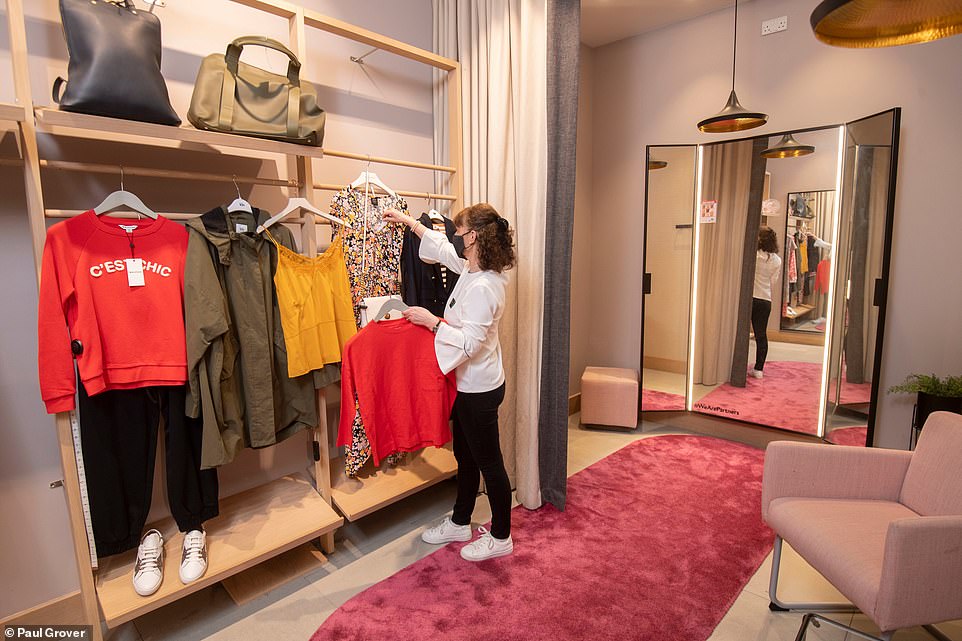 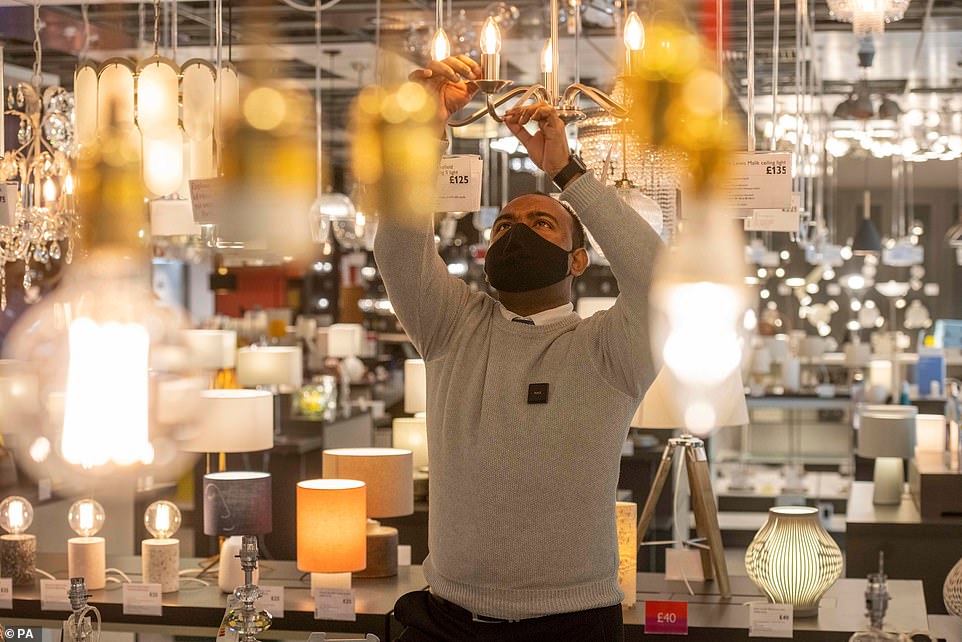 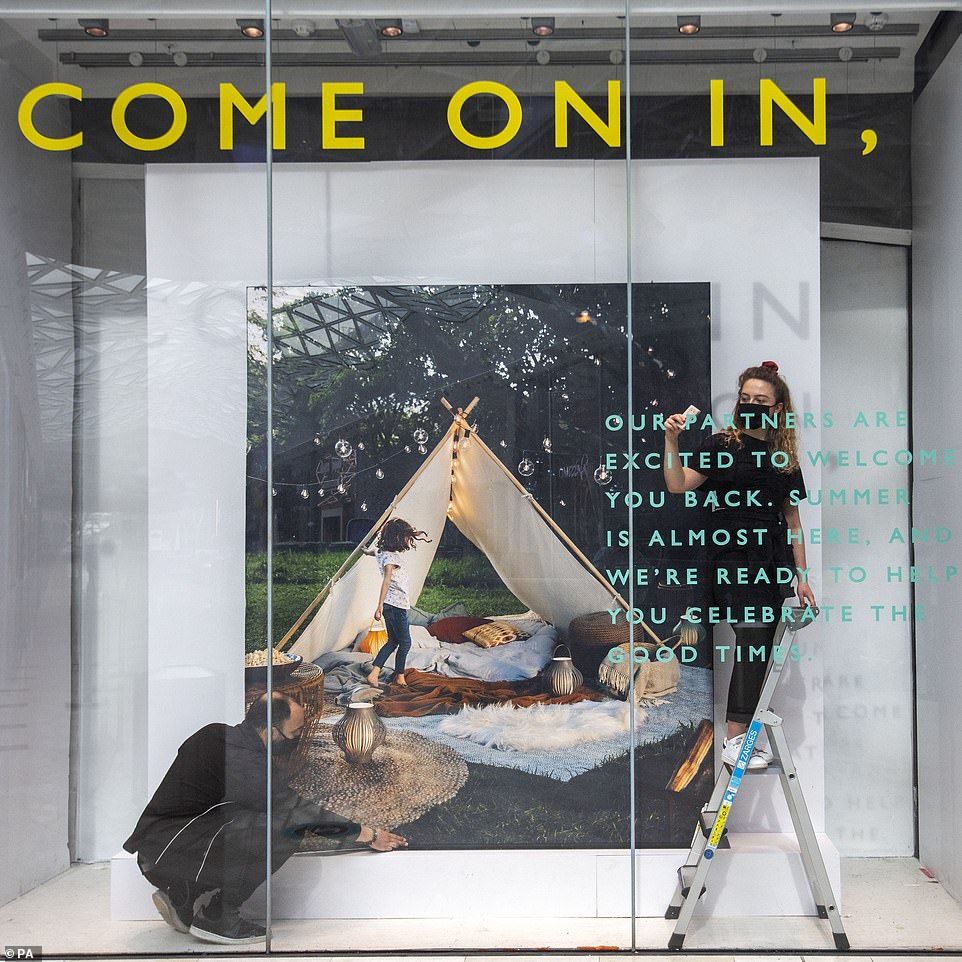 John Lewis has now announced its stores in England will reopen next Monday, before its Glasgow store opens on April 26 and its Edinburgh site on May 14.

Next day click and collect services will resume in John Lewis shops, in addition to pick-up locations in Waitrose, Co-op and Booths, taking the total number of collect locations to more than 900.

John Lewis has said it will be employing these methods to help customers shop safely from next Monday:

John Lewis executive director Pippa Wicks said: ‘We are delighted to be welcoming our much-missed customers into our shops once more.

‘We’re looking forward to reuniting customers with the joy of physical shopping, along with the excitement of our stores, whilst also introducing our customers to stylish new products at prices they won’t expect.

‘We’re also excited to be opening up much-needed services and helping customers choose those items that are harder to buy online – from the perfect mattress, to road testing the right pram or finding the right pair of jeans.

‘We want to make sure the shopping experience is as fun and inspiring as it’s ever been, while also ensuring that our customers and partners feel safe.’

The partnership, which also owns Waitrose supermarkets, has been forced to take desperate action to cut costs as shoppers move online and lockdowns led it to post a mammoth £517million loss – the first in its 157-year history.

On March 24, John Lewis told staff that four major department stores in Aberdeen, Peterborough, Sheffield and York will close, as well as four ‘At Home’ stores in Ashford, Basingstoke, Chester and Tunbridge Wells.

Meanwhile Primark said it is planning to offer extended opening hours across almost every store in England and Wales to help reduce queues, spread demand and give customers more time to shop safely.

For the first week initially, stores will open for two extra hours per day on average, typically an hour earlier and later, with times varying by store. 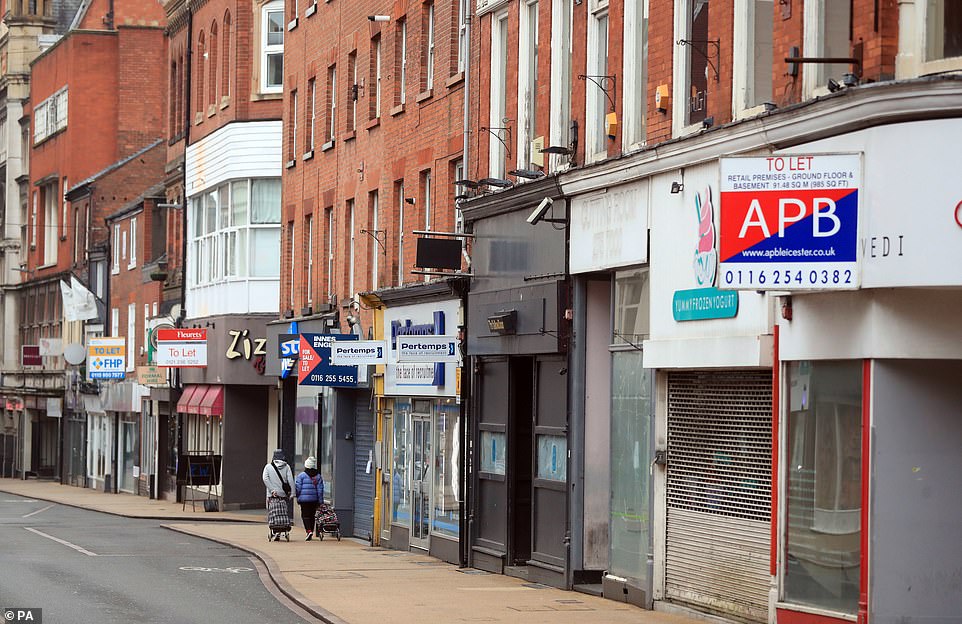 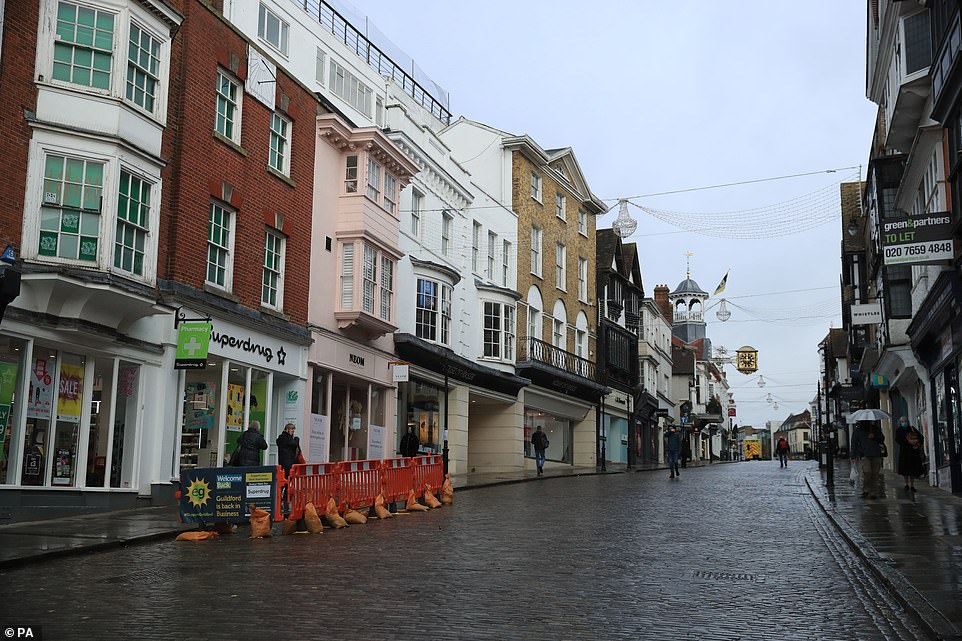 The deserted High Street in Guildford, Surrey, the morning after Boris Johnson announced the third lockdown, on January 5 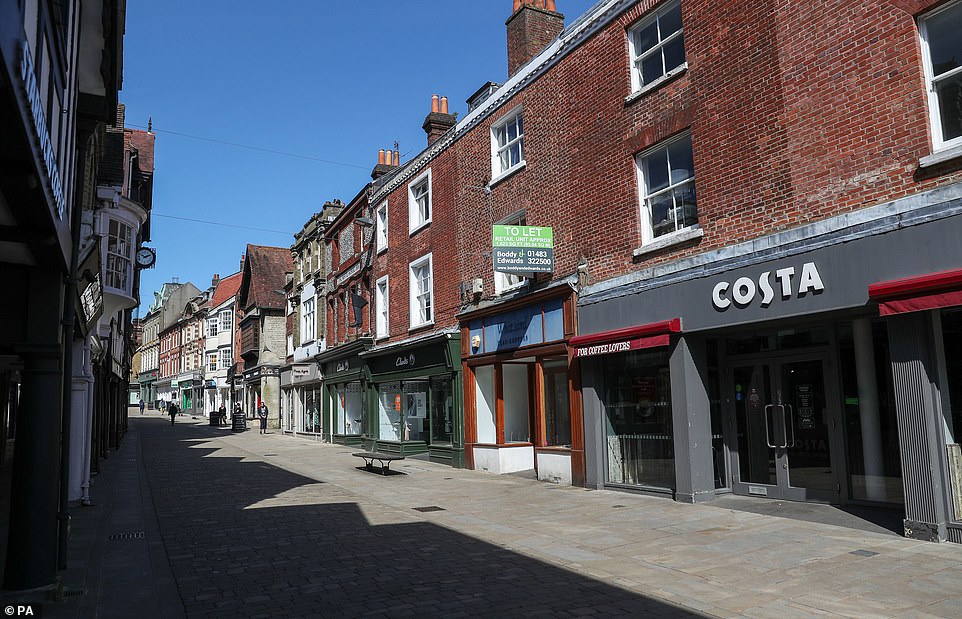 People walking along a near empty High Street in Winchester, Hampshire, on April 21 last year during the first lockdown 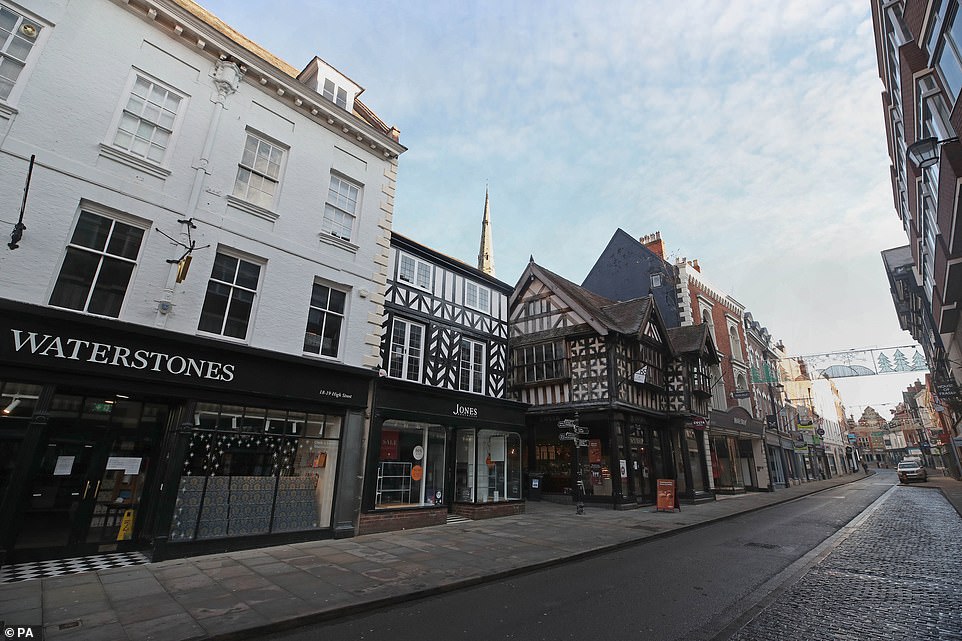 Primark chief executive Paul Marchant said: ‘Safety remains at the front of our minds. We have extended opening hours across almost all of our stores to help meet demand safely but we’re also asking our customers to keep up the support and spirit they showed last year, particularly if queuing outside or in-store.’ 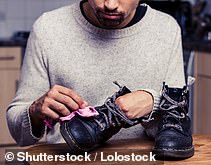 Waitrose has stopped selling shoe polish – after the shift to home-working led to a fall in demand for shiny office shoes.

The supermarket chain confirmed it had ditched the classic cleaning product ‘to make way for new product launches’.

Lockdown has already seen a slump in sales of everything from high-heel shoes to alarm clocks, ironing boards, lunchboxes and lipstick, according to research by the John Lewis group.

Meanwhile cobblers Timpson, which has many supermarket outlets, recently confirmed that demand for shoe repair had also collapsed despite launching an online service.

Richard Preston, from Maidenhead, Berkshire, said he had become frustrated at not being able to find shoe polish in Waitrose stores.

‘I contacted its head office and was advised that shoe polish has been discontinued in all stores to free up space for more popular items,’ he said.

‘Apparently, few people buy it today. Are we becoming a nation of scruffs?’

And Anita Milton, 51, from Chislehurst, south-east London, a hospital manager, said: ‘It’s a shame Waitrose have stopped selling polish but I suppose we live in a throwaway society and people aren’t bothered about looking after their shoes as much now.’

Traditional polish brand Cherry Blossom can trace its history back to 1906 and a factory in Chiswick, west London.

Ikea said it was preparing to reopen stores across England and Wales from April 12 following the reopening of its stores in Scotland on April 5.

Ikea restaurants will remain closed until May 17, although bistros, which operate a contact-free takeaway service, will remain open along with Swedish food markets.

Poundland is reopening more of its hibernating shops and plans to open more new stores over the next six months. Because it is classed as an essential retailer, the majority of Poundland stores have remained open throughout lockdown, but 55 ‘hibernating’ shops will reopen on April 12.

The Willenhall-based discount retailer said it will have opened 25 to 30 Poundland and Dealz stores in the UK and Republic of Ireland over the 12 months to the end of September.

Poundland brought 29 stores out of hibernation in February and will now reopen 43, including at the Merry Hill shopping centre in Brierley Hill and Sutton Coldfield on April 12 in England, Wales and the Republic of Ireland.

A dozen Pep&Co standalone fashion stores in England and Wales will also reopen next Monday. Six further stores in Scotland are set to follow later in the month as restrictions are lifted there.

Poundland also confirmed it is moving ahead with a £25million improvements programme launched last July, including new store openings and relocations, store revamps and investment in its chilled and frozen food distribution network following the 2020 acquisition of Fultons Foods.

Poundland has created more than 400 jobs in the current financial year and expects to create at least 250 more by the end of September.

Barry Williams, Poundland managing director, said: ‘It is fantastic news that our high street neighbours are preparing to get back to business – not just other retailers but the cafes, gyms and hairdressers who make our town centres the vibrant places people love. We’ve missed you and are pleased you’re coming back.

‘We know too that many will be making their first tentative steps back into their town centres after being away for some time – we can’t wait to welcome them and say hello. Come see how we’ve changed.

‘We’re cracking on with our transformation programme and our investment in new stores, refurbishments, new ranges and distribution. With the challenges faced by high streets, that’s good news for our customers, our colleagues and our communities.’

a, Big, For, gears, High, Street, up
World News