For all the faultless pageantry, the bravura musical recitals and some of the most mesmerising stagecraft ever seen, nothing could quite trump the simple sight of the greatest figure in British post-war history standing before us all on her balcony.

At the end of four days of national celebration – indeed, let us call it rejuvenation – the Queen had come to tell us what a large part of the planet has been saying to her in recent days: thank you.

She said it in words – with last night’s statement expressing how ‘humbled and deeply touched’ she had been by all the ‘kindness, joy and kinship’. Echoing both her Coronation oath and her immortal pledge, at the age of just 21, to serve us as best she can, she reassured as that nothing changes whatsoever in that department. 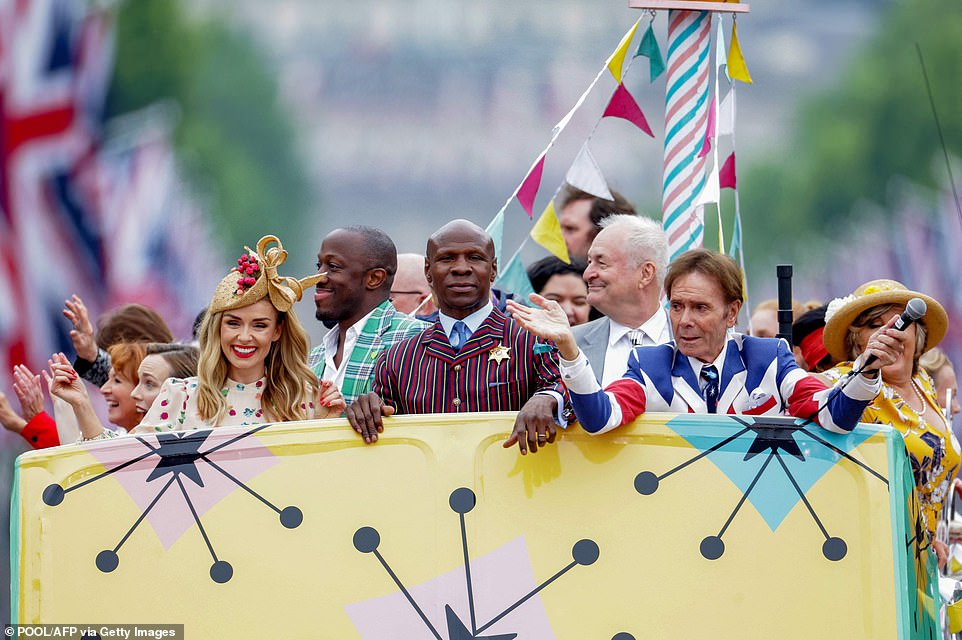 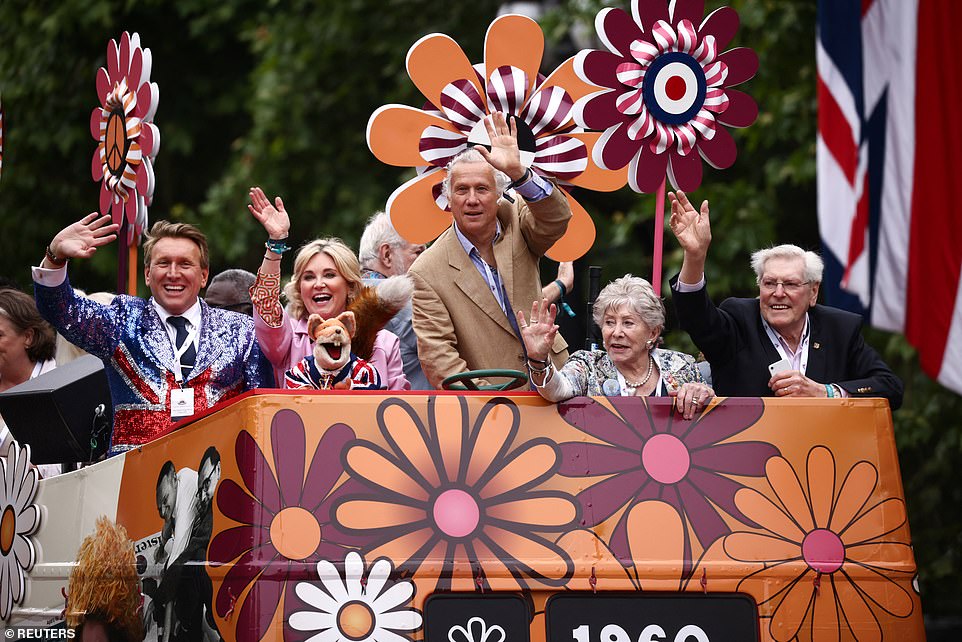 Just as eloquent was the closing sight which greeted the hundreds of thousands packing the full length of the Mall (some of whom had run its entire length, when the barriers lifted, to be in pole position for this moment).

Clasping her staff in one hand, like a bottle-green mini-Moses, she repeatedly waved at us with the other, acknowledging that she and we have all leaned on each other through these past 70 years.

For that was also the message of yesterday’s exuberantly barmy and delightful three-hour compendium of memories and tributes which brought this great jubilee to a close.

Though officially branded the Platinum Pageant, this was part-carnival, part-Olympic opening ceremony, part-Cup Final parade. Unrehearsed and full of the unexpected, it was also irredeemably, hilariously British. Would anywhere else on earth contrive to insert a section called Dames in Jags into a national parade – and then rejoice when one of them (Dame Prue Leith) ended up being pushed down the Mall after her vintage Jaguar conked out. 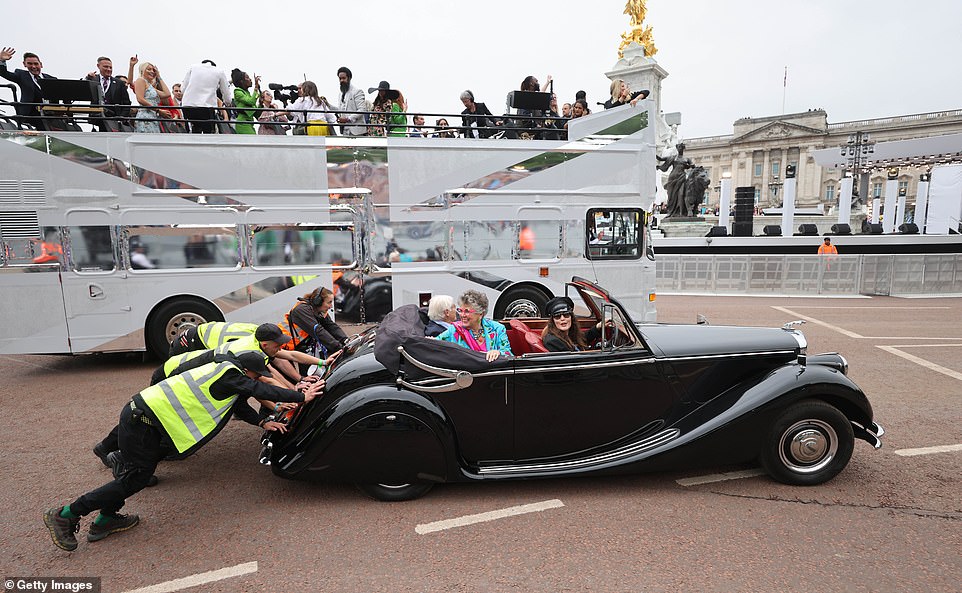 No wonder most of the occupants of the Royal Box were gripped, wondering what on earth might be coming next.

Split in to four parts, the event opened with the one component which was never going to go wrong. Called For Queen and Country, it featured all the Forces from all over the country and from much of the Commonwealth, too.

In their midst came the Gold State Coach – by far the largest, oldest and most uncomfortable occupant of the Royal Mews –which had somehow been kitted out with a fabulously realistic E II R avatar waving through the window. So far, so splendid.

Next up came an unashamedly festival of nostalgia billed as The Time of Our Lives but which might equally have been described as cultural icon bingo.

Pick any year from the last 70 and then say the first thing which comes into your head. The chances are that, whatever this might be, it was in this parade. 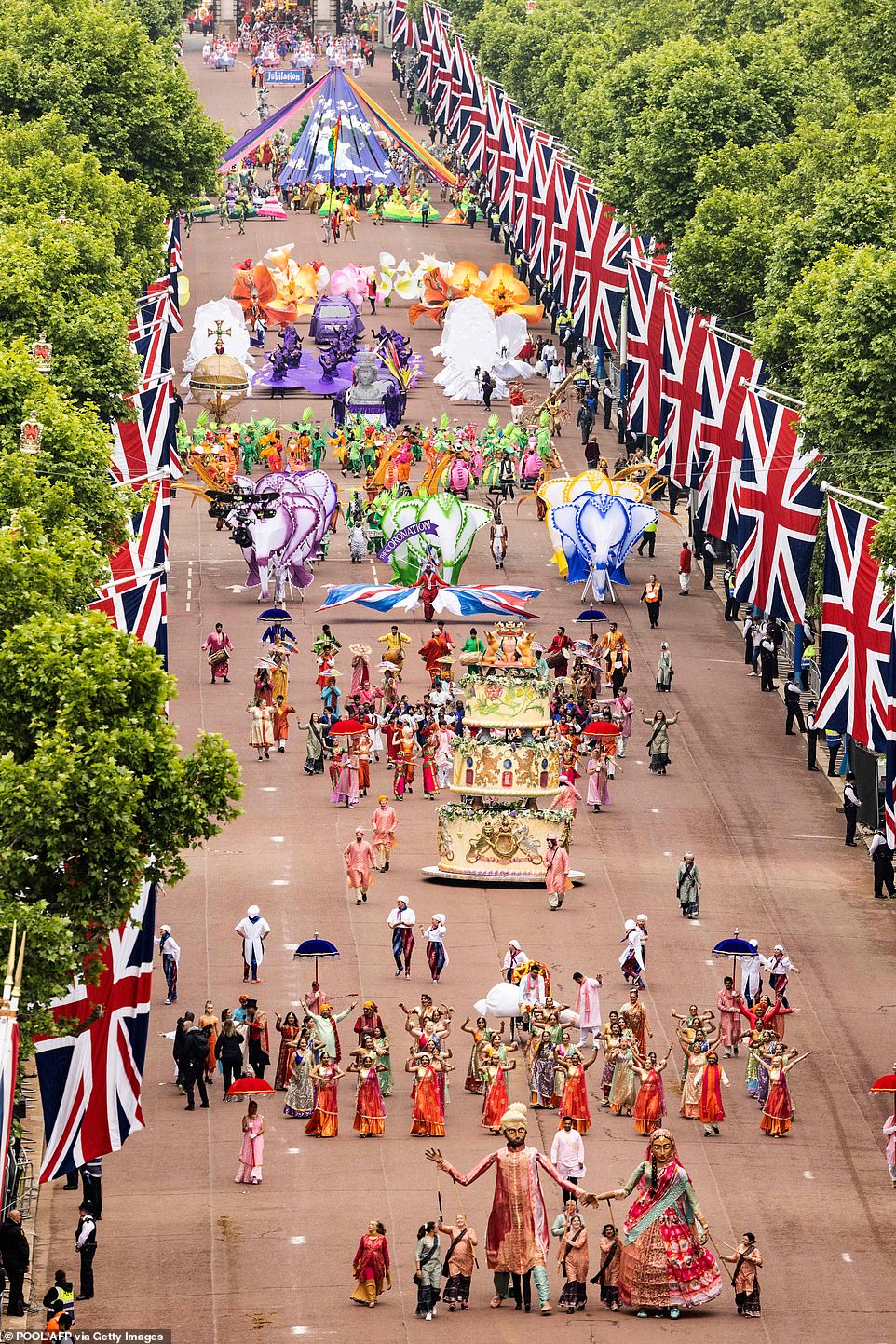 So, the Fifties included a hefty fleet of Morris Minors, a hundred dancers ‘doing the Lambeth Walk’ in period costume followed by another hundred doing the jive, plus a cross-section of early children’s telly programmes.

Bill and Ben the Flower Pot Men skipped alongside the first of the open-top double-decker buses, which were supposed to be carrying famous faces from each decade. Sure enough, in pride of place on the Fifties bus was Sir Cliff Richard, not merely waving but belting out some of his early numbers. Dressed in his Union Jack jacket, he would, by rights, have been perfectly at home on any bus from any decade.

However, the Fifties are a bit low on living legends these days – with the exception of Her Majesty and the evergreen Sir Cliff – so the organisers had topped this one up with other celebrities.

Quite why former boxer Chris Eubank and singer Katherine Jenkins had been lumped in with the Fifties, no one seemed to know. No matter. This was a fiesta, not a history lesson.

A regiment of cyclists, dressed in just about everything except lycra, pottered along, led by Olympic legends like Sir Chris Foy and the multi-medalled Sir Jason and Dame Laura Kenny. It is unlikely that they have ever ridden so slowly in their lives. 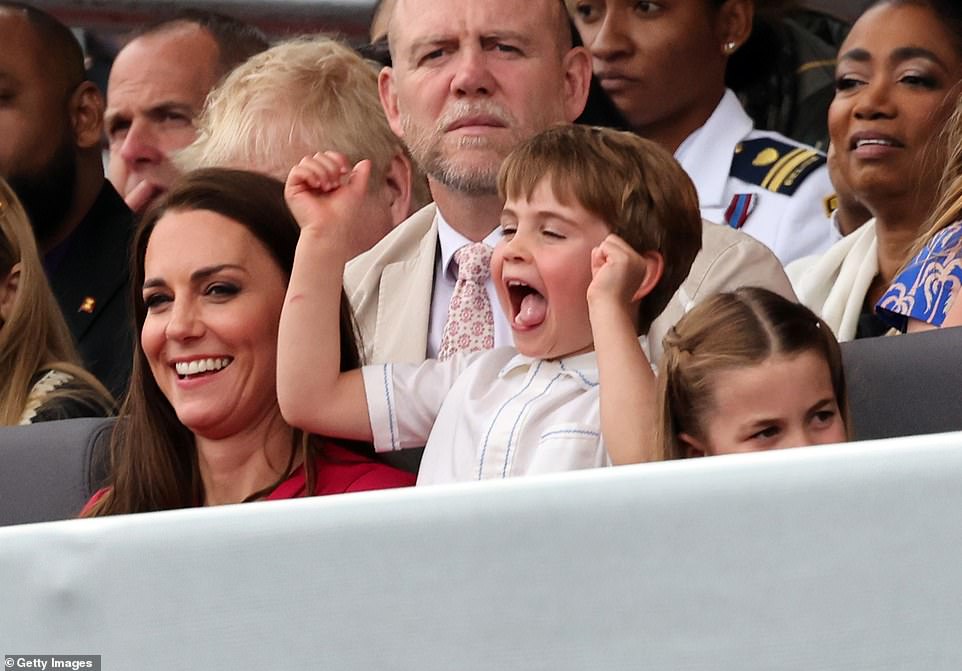 The four-year-old joined brother George, eight, and seven-year-old sister Charlotte in the Royal Box for the two-and-a-half hour parade 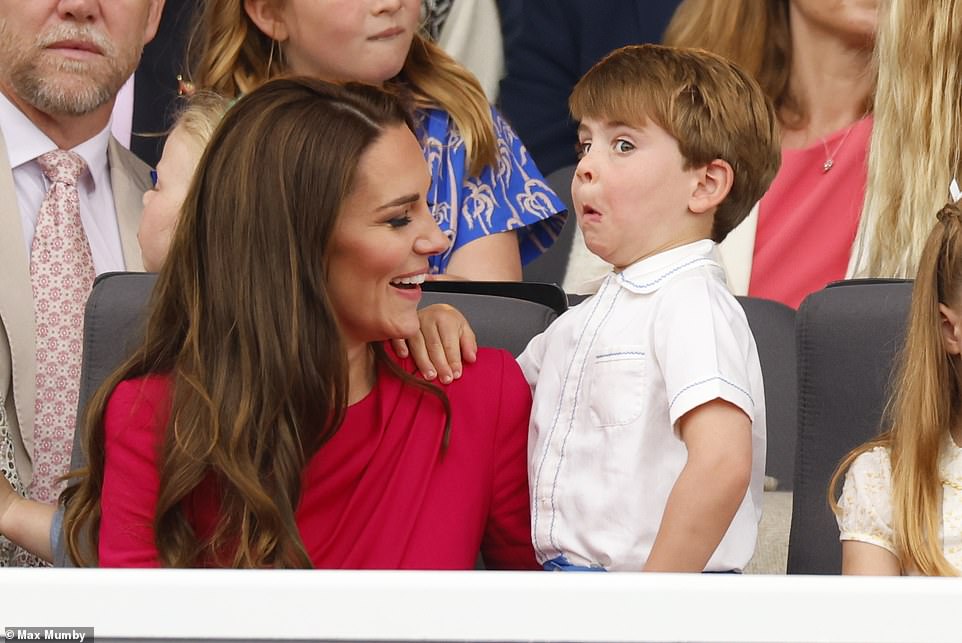 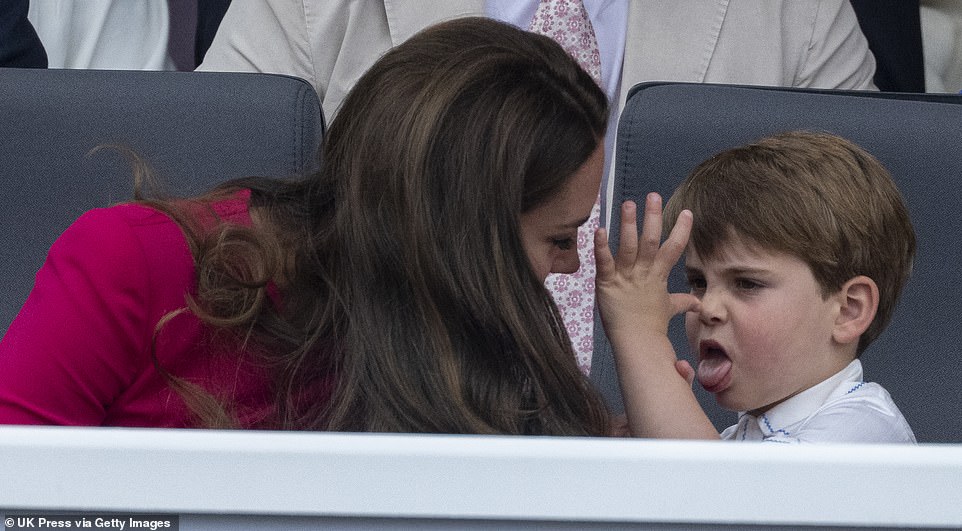 Dressed in a hand-me-down white shirt with blue piping and matching shorts, Louis sat next to his mother Kate, who couldn’t stop smiling at his antics… most of the time

Squadrons of Vespas, Land Rovers, Minis and James Bond vehicles popped up in between the decades. The Sixties bus boasted Tony Blackburn, Basil Brush and Blue Peter legends, Valerie Singleton and Peter Purves (both of whom I would have put on board the Seventies but never mind).

Space Hoppers, a Mr Whippy van and disco roller skaters ushered in the Seventies. On board the bus, we found Angela Rippon and Slade’s Noddy Holder. Following behind came an entire truck dedicated to celebrating Abba. After all, this year happens to be their golden jubilee.

Breakdancers, aerobics and New Romantics – plus Torvill and Dean – brought us the Eighties while the Nineties proved well-supplied with supermodels, including Kate Moss and Naomi Campbell.

Up in the Royal Box, there was particular excitement from the younger contingent as Seven Decades of Childhood kicked off a display featuring the Wombles, Peppa Pig and In The Night Garden. 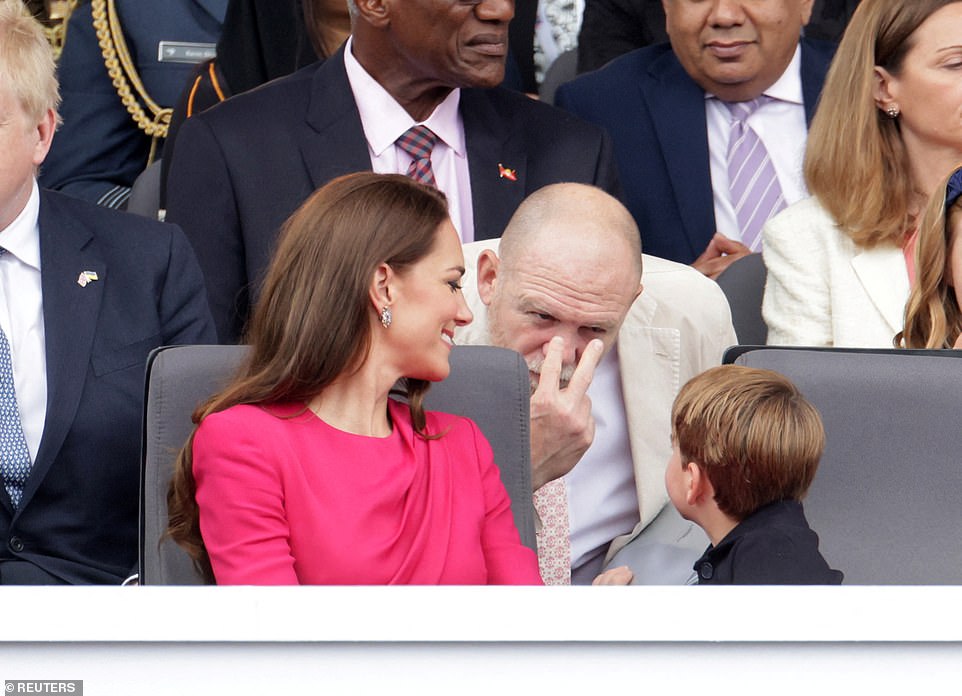 Mike Tindall, the ex-England rugby player husband of Princess Anne’s daughter, Zara, leaned over the seat, looked Louis in the eye and indicated he was ‘watching’ him 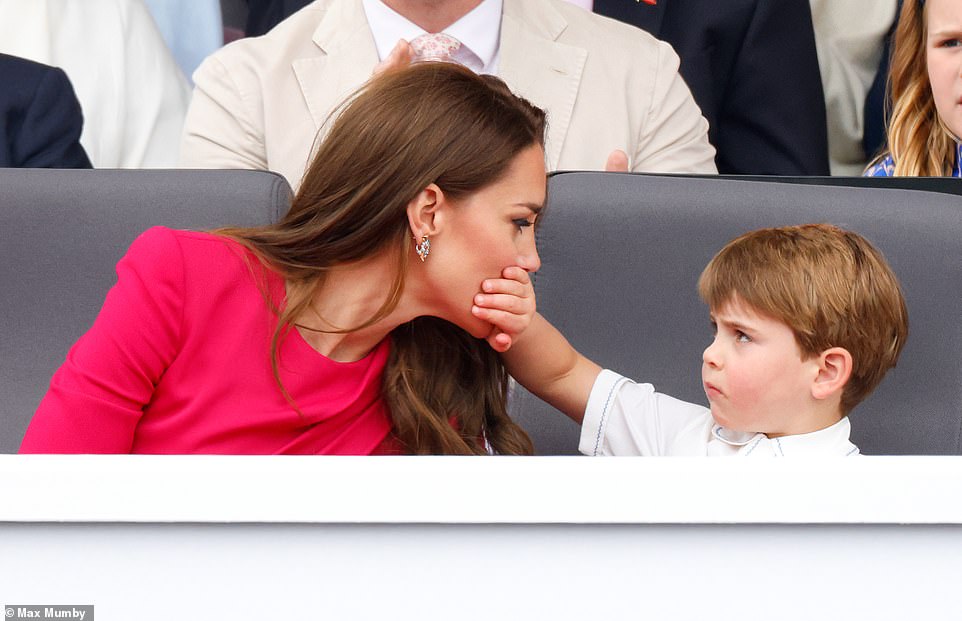 Blowing raspberries, shushing his mother and bouncing up and down on his grandpapa’s lap, Prince Louis stole the show once again yesterday 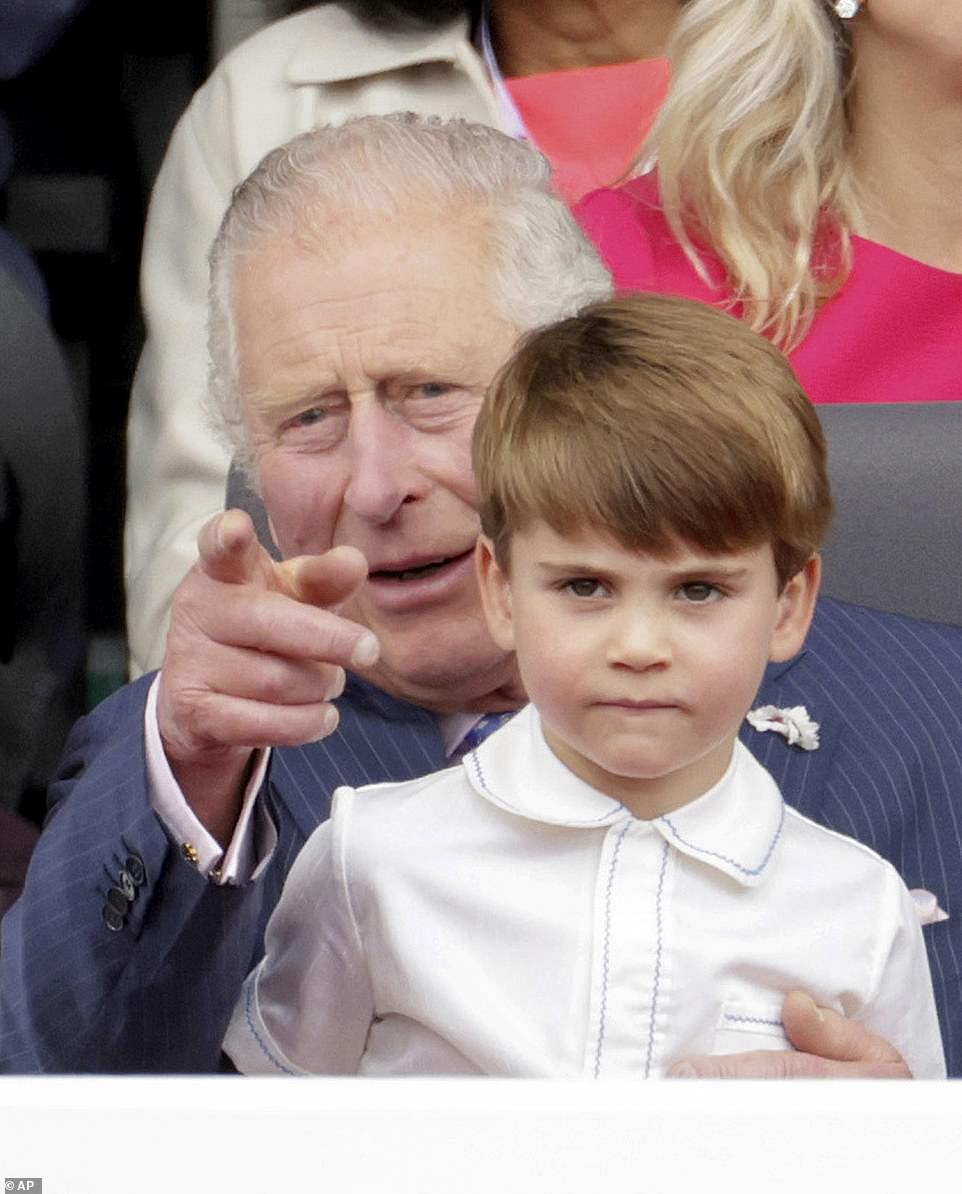 Unsurprisingly perhaps, the procession became less powerful the nearer we got to the present day. Youth is never much good at nostalgia for obvious reasons. No matter. The third act, billed as Let’s Celebrate, unveiled some of the most impressive street theatre ever seen in this country, a riot of youthful energy which would do justice to any of the great carnivals – from Trinidad to Rio to Notting Hill.

There was nothing homespun or cobbled-together about some of these costumes, like the giant Union Jack-butterfly or a mighty oak tree maypole painting Queen-like images of longevity and stability. One display was a giant Bollywood-style wedding tableau including a gargantuan replica of the Queen’s wedding cake. Another, from Coventry, called The Queen’s Favourites, featured some lively corgi puppets and replicas of the Duke of Edinburgh’s old yacht, Bluebottle.

As it all drew to a close, there were shrieks of delight as the Royal Standard appeared over the Palace signifying that we would, after all, be seeing Her Majesty in person. In keeping with the spirit of this occasion, she received a fanfare in the form of Ed Sheeran strumming his hit Perfect, while giant screens flashed up images from the Royal Family’s own albums. These were not so much formal shots of the sovereign as snaps of a proud young mum, a grandmother, a wife sharing a joke with a husband only recently departed. The brilliant poignancy of it all prompted some those around me to start biting their lips and reaching for the tissues.

At which point, the doors opened, out she came and they crumpled. 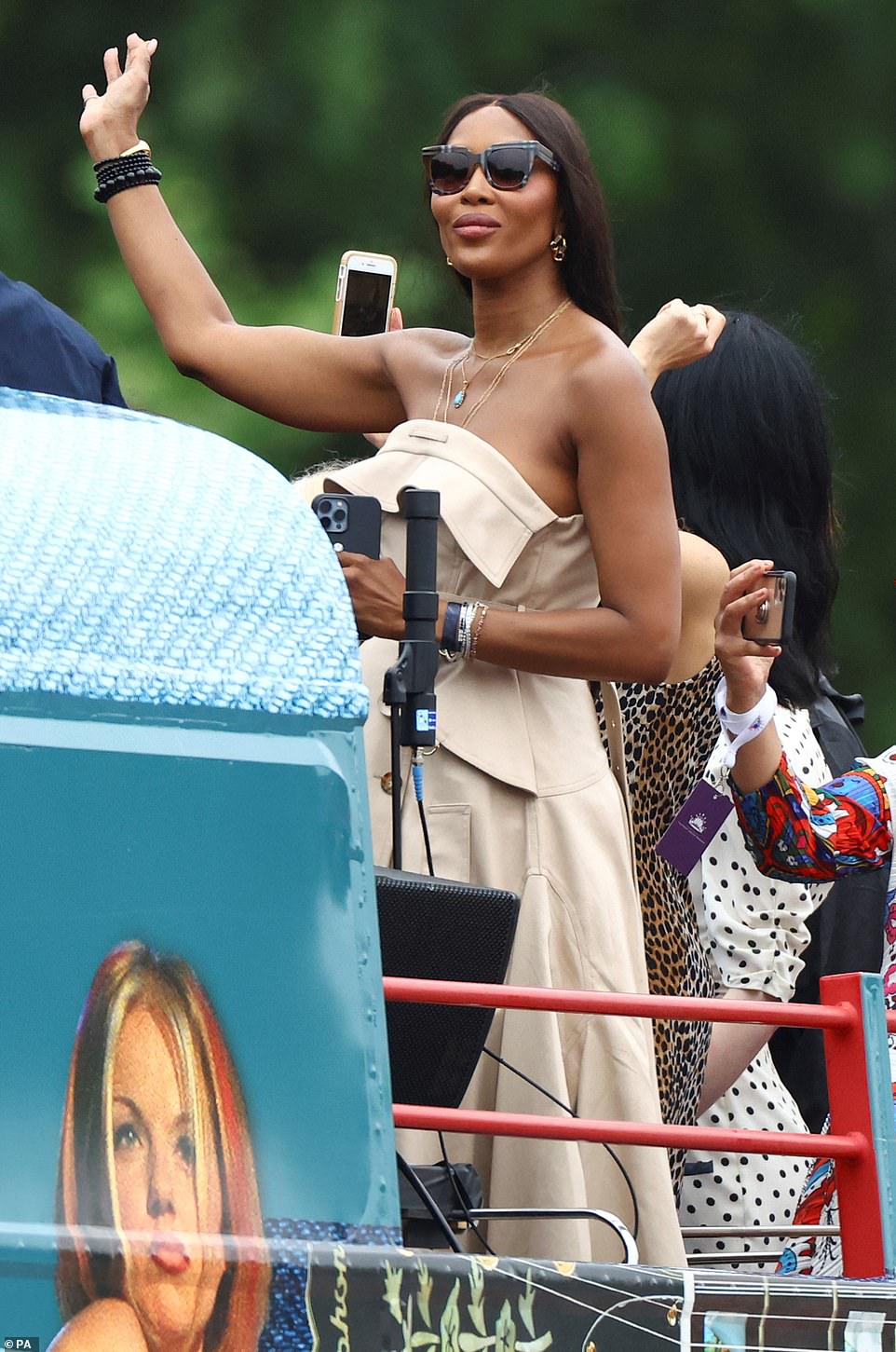 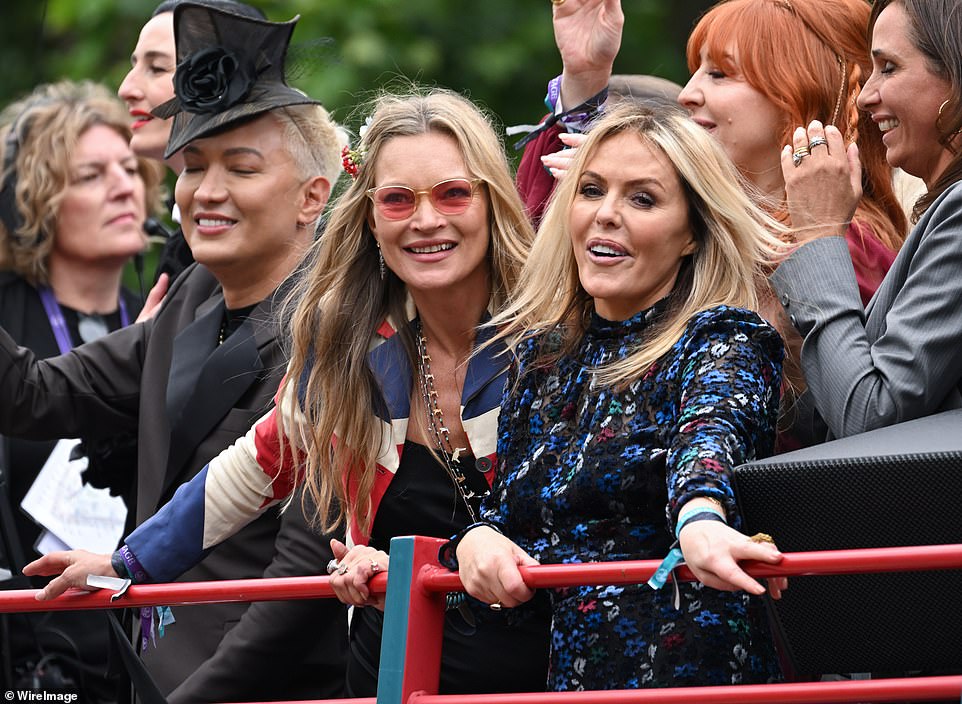 The past few days have focused, understandably, on the big national events but let’s hear it for those indefatigable, unsung organisers of countless magical moments nationwide. Hats off to, say, little Corston in Somerset where they have been enjoying everything from a Jubilee Songs of Praise and three-hour peal of bells to a jubilee quiz night, jubilee owl-spotting and jubilee boules, not to mention a cracking tea and cake party.

Hats off to Inveraray’s Pipe Major Stuart Liddle who wrote a new piece for the Queen, Diu Regnare, which has now been played right around the world while he himself played it as the Dunn na Quaich beacon was lit overlooking Inveraray Castle.

Three cheers for those stalwart committee members behind every last Jubilee Big Lunch and the smallest street party in the tiniest cul de sac. And hats off, too, to the architects of that jaw-dropping lightshow over the Palace on Saturday night.

We have learned that we have so much more in common than that which sets us apart.

Above all, we have been reminded why that should be.

We have taken her for granted for most of the past 70 years. Yesterday, however, we were reminded that she – and we – have all earned a place in history this weekend. 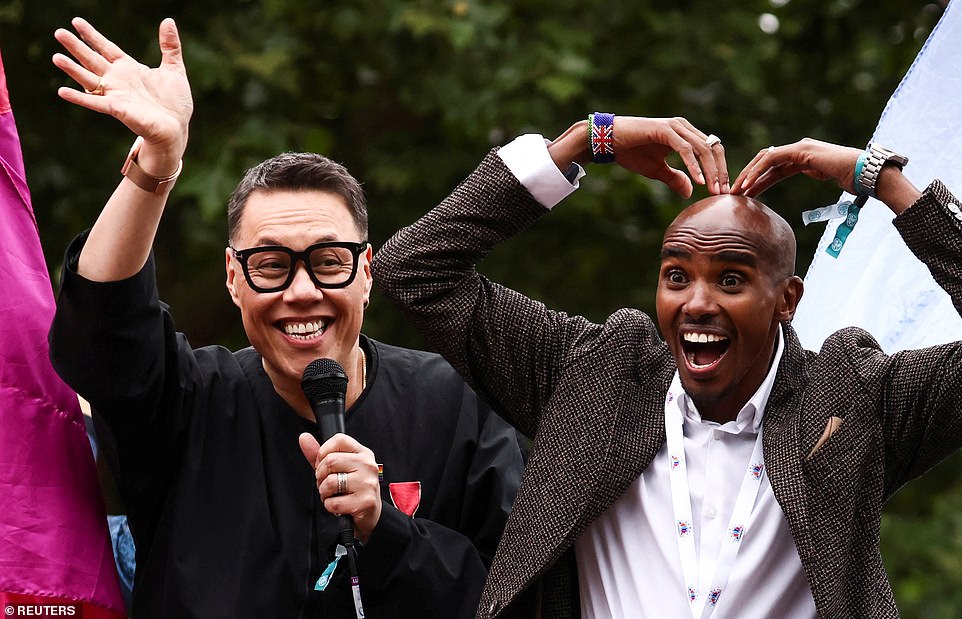 The cook and the runner: Mo Farah (right) and Gok Wan (left) take part in the parade 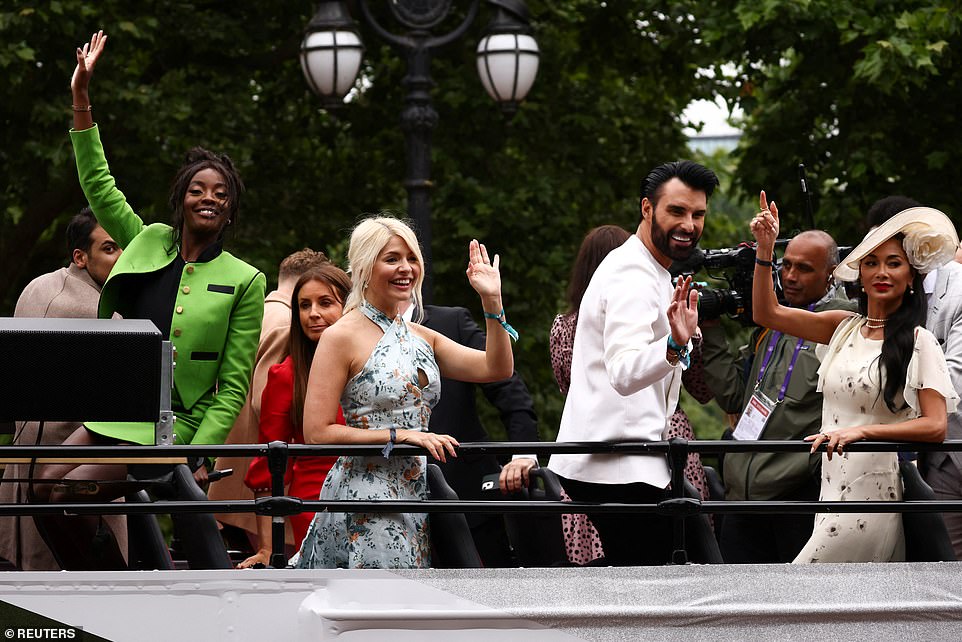 Photo ready: Holly Willoughby (left) and Rylan Clark (right) wave while marking the end of the celebrations for the Platinum Jubilee