The National Trust will enter the accommodation sector when, for the first time in Victoria, it opens one of its properties for overnight stays.

A $2 million state government grant, announced on Wednesday, means tourists will be able to stay at Mooramong, a 1600-hectare farm in western Victoria once owned by a Hollywood movie star. 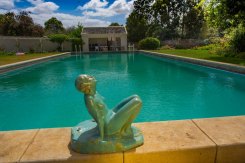 The pool actor Claire Adams had installed at Mooramong Homestead near Skipton after she moved there in the 1930s.

The Trust’s Victorian CEO Simon Ambrose said tiny houses and eco glamping tents would be erected on the property, and guests would also stay in historic cottages.

The property near Skipton, 50km west of Ballarat, is rarely open to the public presently, but will eventually be able to host up to 214 tourists per night.

The heritage-listed Mooramong Homestead, built in 1874, will not itself host overnight stays, but will now be open for day visits from spring, although a date has not been set.

Ambrose said it would be the first time the National Trust of Victoria had offered an accommodation tourist product in Victoria, but not the last. 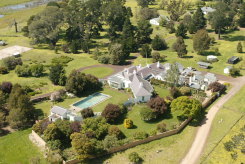 He said the Trust had identified a number of its other properties to be developed for accommodation “in the near future”, which would provide the Trust with income and also serve in “activating significant heritage properties”.

Another Trust property where accommodation is planned is Gulf Station in Yarra Glen, east of Melbourne.

When former movie actor Claire Adams and Australian grazier Donald “Scobie” Mackinnon moved to Mooramong in the late 1930s, they remodelled the house into an art deco and Los Angeles Spanish-style palace.

The couple died in the 1970s and bequeathed the property to the National Trust, which leases it as a working sheep and crops farm that has provided income to the heritage organisation.

Ambrose said the project would cost about $2.6 million, with the Trust contributing $575,000.

It is expected to take two years to develop, however the first guests may be welcomed as soon as November this year.

Donald and Claire Mackinnon at Mooramong.

The accommodation options will include: three historical cottages, each sleeping six people with full kitchen facilities for an expected $360 to $400 per night; and, three tiny houses in secluded locations on the property — two of them for couples and one for a family of four, priced from about $350 to $700 per night.

Two boutique apartments in the former single gentleman’s quarters will offer “higher end” accommodation for couples, at an estimated $360 to $500 per night. Twelve glamping tents are also planned for the site, each for two to four guests, who will share a campfire and cooking facilities and pay between $160 and $270 per night.

Ambrose said he was thrilled at the $2 million government grant from the Regional Tourism and Infrastructure Fund. He said it meant Mooramong’s rich history could be shared with the wider community.

Indigenous culture as well as its more recent heritage would be showcased, and the aim would be to create “a holistic experience for day trip visitation, accommodation and education,” Ambrose said. 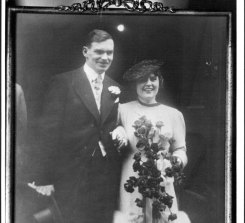 When Adams moved to Mooramong, she employed renowned Melbourne architect Marcus W. Martin to remodel the homestead with elegant art deco features including a Hollywood-style pool with a nude sculpture.

Light fittings in the house are made of rounded chrome and glass, there is a bidet in the bathroom. The games room includes a curved, padded green bar modelled on one the couple saw on the Queen Mary, and in the music room is a custom-made burr walnut Steinway baby grand piano.

On the walls, the home has stills from some of the films Adams starred in between 1917 and 1927, which ranged from westerns alongside cowboy star Tom Mix to adventure films with the dog Rin Tin Tin, whom she described as “my favourite leading man”.

She also starred opposite actors John Gilbert and Lon Chaney.