Seventeen makeshift immigration detention centres – including suburban hotels and aged care homes – are being used by the Department of Home Affairs in a system refugee advocates say is mired in secrecy.

The makeshift detention centres include hotel and apartment-style accommodation – such as the Park Hotel in Melbourne and Brisbane’s Kangaroo Point Central Hotel and Apartments – as well as hospitals and mental health inpatient facilities. 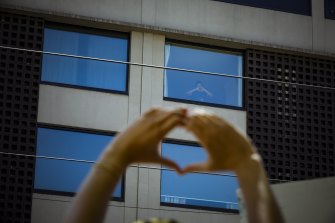 A Bangladeshi refugee at the Park Hotel in Carlton.Credit:Chris Hopkins

The number of “alternative places of detention” in use has been revealed following a freedom-of-information request by The Age and The Sydney Morning Herald.

“We have raised this as a concern with the government,” Mr Santow said.

Home Affairs can authorise a location as an alternative place of detention, but the variety of sites used has not been widely reported.

The locations are supposed to be low-security and used for vulnerable groups, but the Human Rights Commission has warned they tend to be even more restrictive and have “significant negative consequences” for the wellbeing of those in detention.

Last year, The Age revealed a Best Western in Melbourne’s north had been used in secret as a makeshift detention centre with little access to the outdoors.

But the documents released by the government in response to the freedom-of-information request confirm Home Affairs has used the Best Western on Sydney Road in Fawkner for more than two years.

The site was first designated as an alternative places of detention in November 2018 and the first detainees were moved there in February 2019. 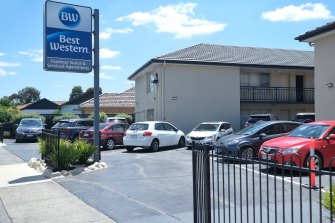 A total of 34 people have been held at the Best Western branch, a mix of asylum seekers and those on an expired or cancelled visa.

David Manne, principal solicitor and executive director of Refugee Legal, said there was a huge lack of transparency around the ad hoc detention centres.

He said it was becoming more commonplace “to find out about the existence of another site … when someone calls us for legal assistance from that place”.

“The striking feature of [alternative places of detention] is the lack of transparency,” Mr Manne said. 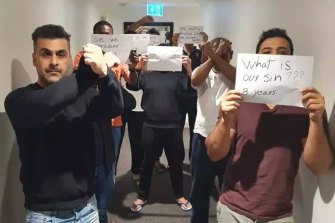 Eleven refugees remain at the Park Hotel in Carlton after dozens of their friends were released on bridging visas.

“That’s what characterises [them], the lack of transparency about where they are and what happens in them.”

Nineteen of the Fawkner detainees were asylum seekers or refugees, 11 of whom were medically evacuated from Papua New Guinea or Nauru under the medevac law introduced in 2019.

The medical transfer rules allowed asylum seekers and refugees detained offshore to be brought to Australia for treatment on the advice of a medical panel. It was repealed in December 2019 by the government, which claimed the law weakened Australia’s offshore detention system.

The other 34 detainees held at the Best Western in Fawkner were not asylum seekers. Five were awaiting deportation because their visas were cancelled for criminal convictions and others had overstayed their visas or arrived by plane without clearance.

Sixteen people remained at the motel on December 7 last year, including some who had been held there for more than six months.

Australia deports people who aren’t citizens – including those who have lived here since infancy – on character grounds if they have been convicted of an offence that attracts a prison sentence of more than 12 months.

The policy has created tensions with New Zealand and prompted Prime Minister Jacinda Ardern to declare: “Do not deport your people and your problems.”

Last week, Australia deported a 15-year-old boy by himself to New Zealand under the law.

On Monday Pip de Veau, the general counsel of the Department of Home Affairs, told a Senate committee the boy had been placed in an alternative place of detention “for a very short period of time” before his deportation, which the department said was lawful.

The latest figures published by Home Affairs show there were 141 people in alternative places of detention on January 31 this year.

Dozens of medevac refugees in hotel detention were released on bridging visas in January following public outrage and daily protests.

Eleven refugees remain at the Park Hotel in central Melbourne after being evacuated from Manus Island and moved from the Mantra Hotel.

Basim Alobeidi, a refugee from Iraq held on the third level of the Park Hotel – which he described as “a prison system” – said he could not open the tinted windows in his bedroom.

“There’s no fresh air,” he said, other than a small terrace on the fourth floor and a smoking area.