Hong Kong’s anti-government protesters and pro-Beijing activists have staged a face-off at a shopping mall.

The two sides clashed into each other at the IFC mall today. Both camps tried to take control of the situation by outsinging each other. 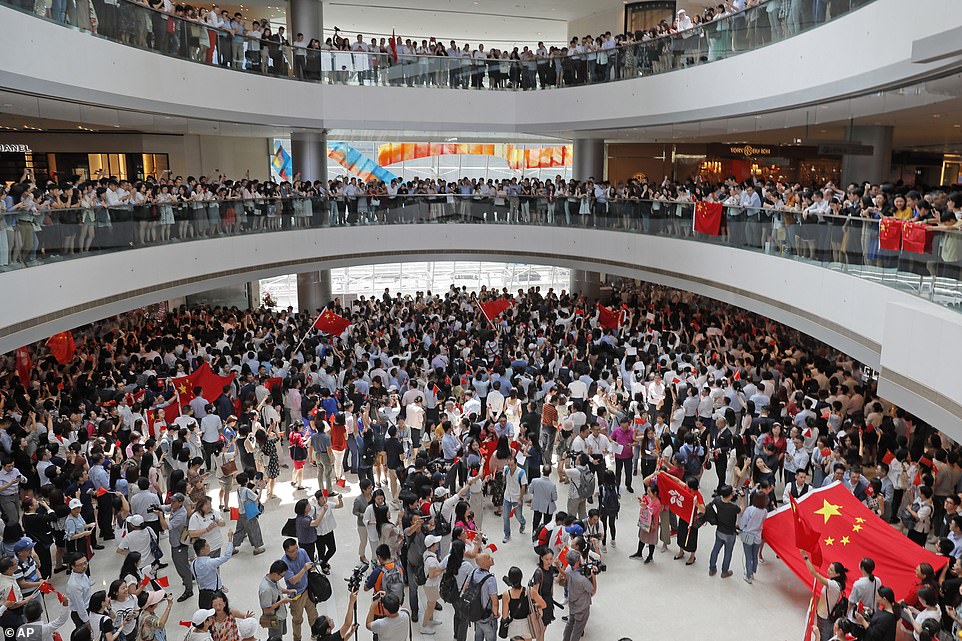 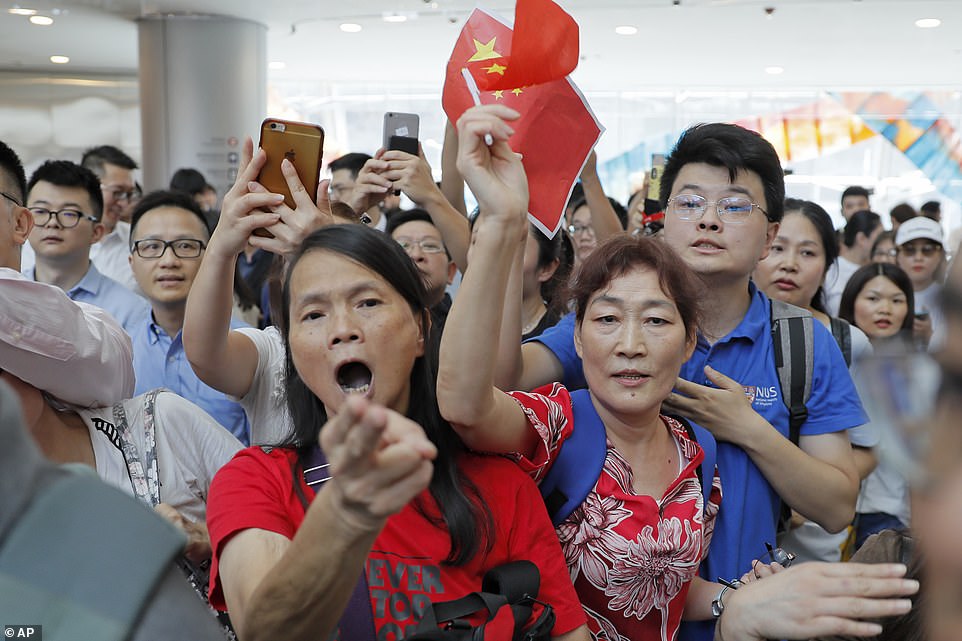 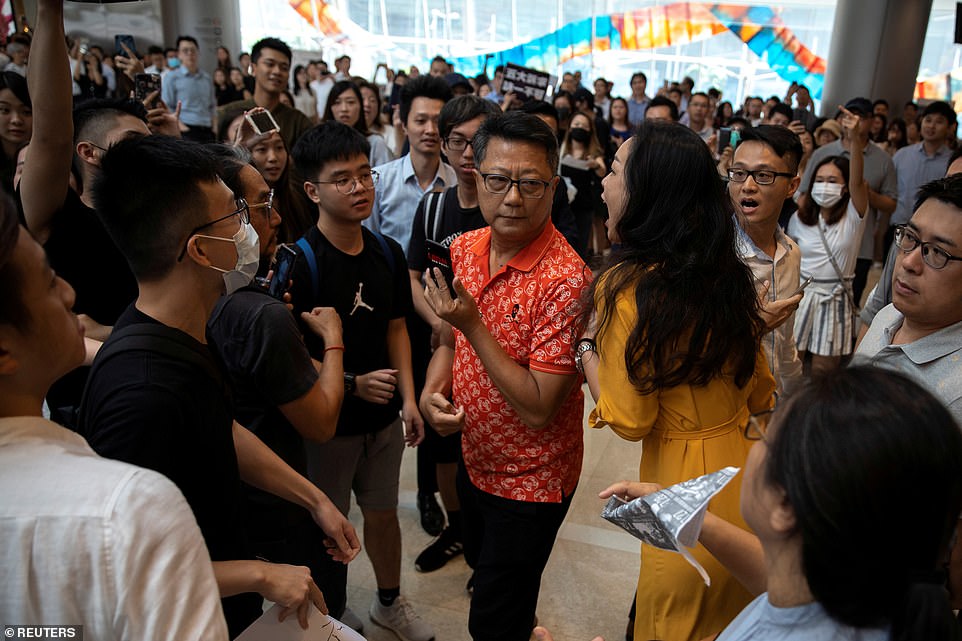 The contest began in early afternoon when hundreds of pro-Beijing protesters responded to an online call to stage a patriotic flash mob at the shopping centre in Central.

The Communist supporters yelled out slogans, such as ‘Hong Kong is China’s’, and urged people to fight with ‘rioters’, referring to the anti-government activists.

While their opponents sang out loud ‘Glory to Hong Kong’, a defiant tune that has gone viral. They also shouted counter mottoes including ‘Hong Kong is not China’s’ and ‘liberate Hong Kong, revolution of our times’. 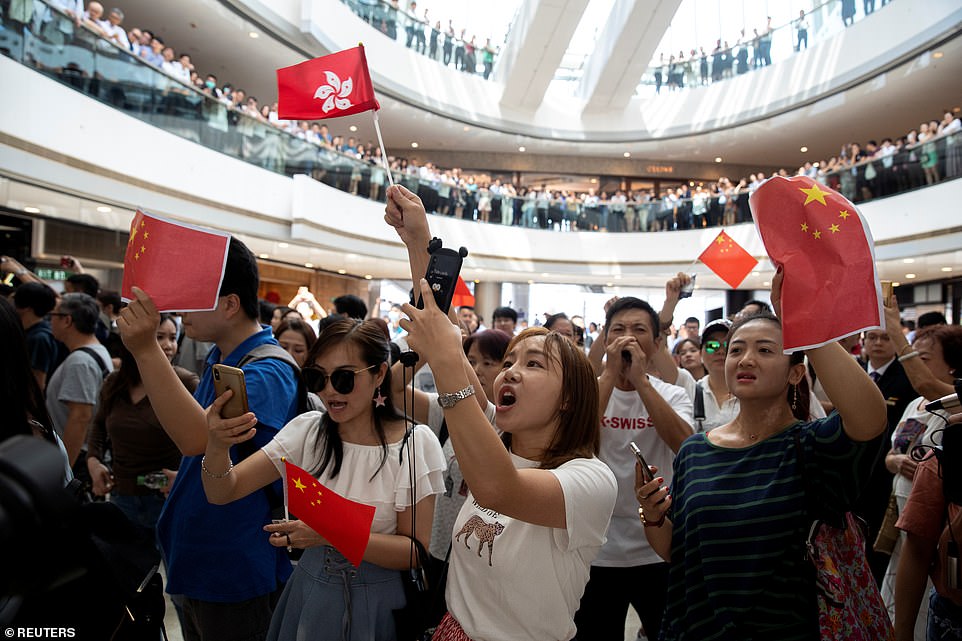 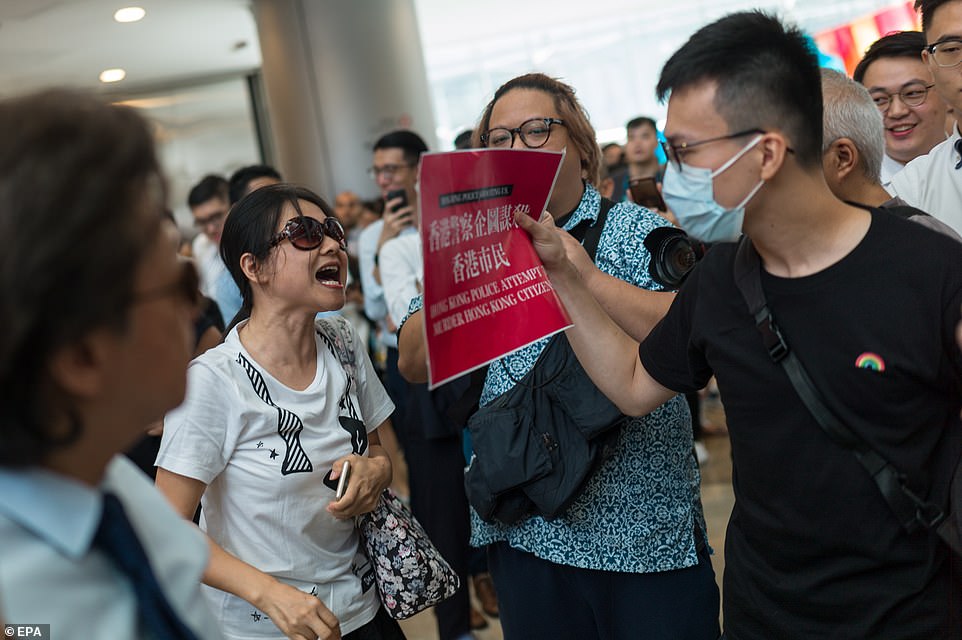 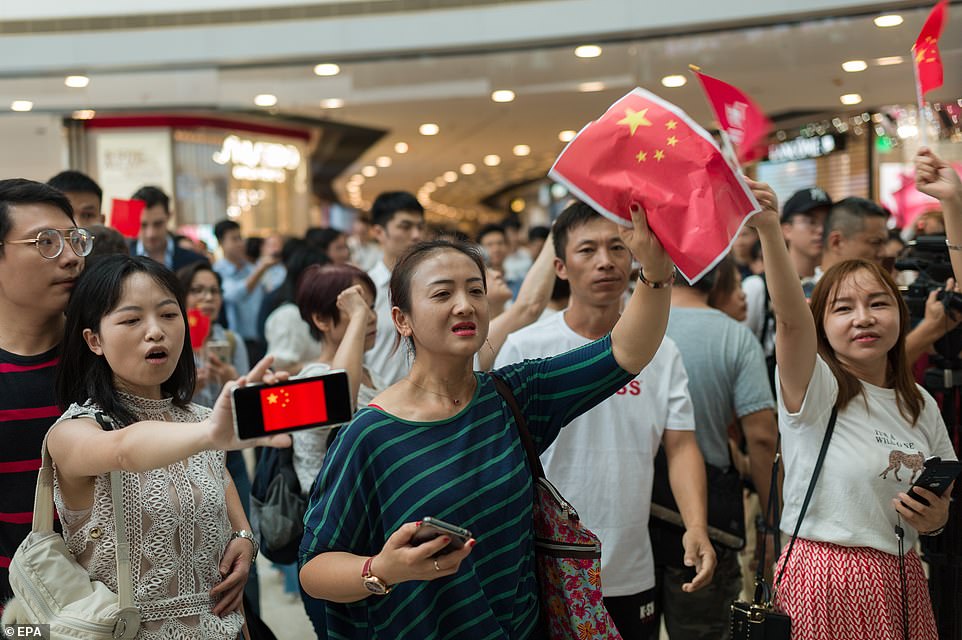 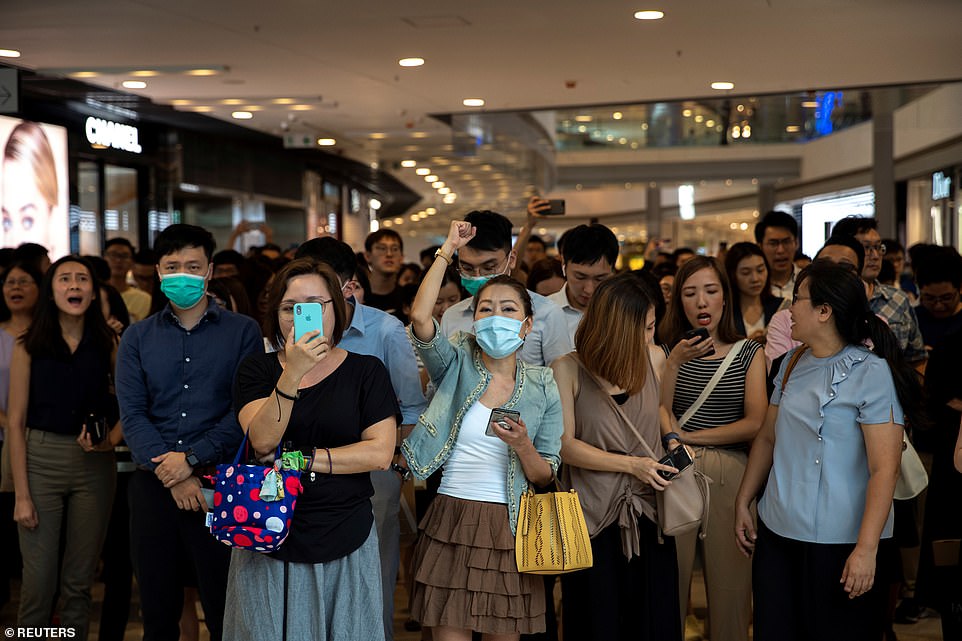 Pro-democracy protesters shout their slogans, including ‘Hong Kong is not China’s’, to rival the pro-Beijing camp at IFC mall

One pro-democracy protester, known by his surname Yiu, told HK01.com that many residents had been gathering to sing songs in shopping mall as a form of protest as of recent.

Mr Yiu said he felt encouraged after hearing ‘Glory to Hong Kong’ being sung by a huge crowd today.

Bystanders filled the mall from the ground to the third floor to observe the rivalry and minor physical altercations occurred between some members from the pro-Beijing and anti-Beijing camps, said RTHK.

‘Glory to Hong Kong’, penned anonymously, has been adopted by anti-government protesters as their anthem. The lyrics reflect protesters’ vow not to surrender despite a government concession to axe an extradition bill that sparked the summer of unrest.

The song has been sung at almost every protest since it emerged on August 31, including during a World Cup qualifier match on Tuesday with Iran where Hong Kong soccer fans booed at the Chinese national anthem before kick-off.

The original version, posted to YouTube by a user called ‘dgx dgx’, has gathered more than 1.4 million views in less than a fortnight.

Late Wednesday, activists and ordinary citizens sang ‘Glory to Hong Kong’ at several malls for a third straight night in a respite from recent violence clashes; while more protests are expected this weekend. 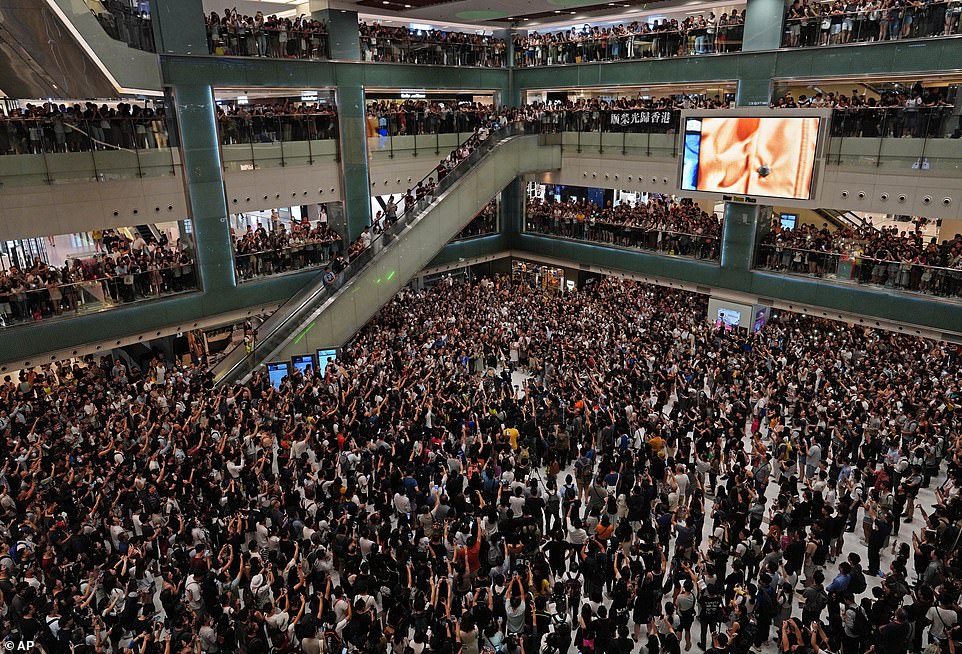 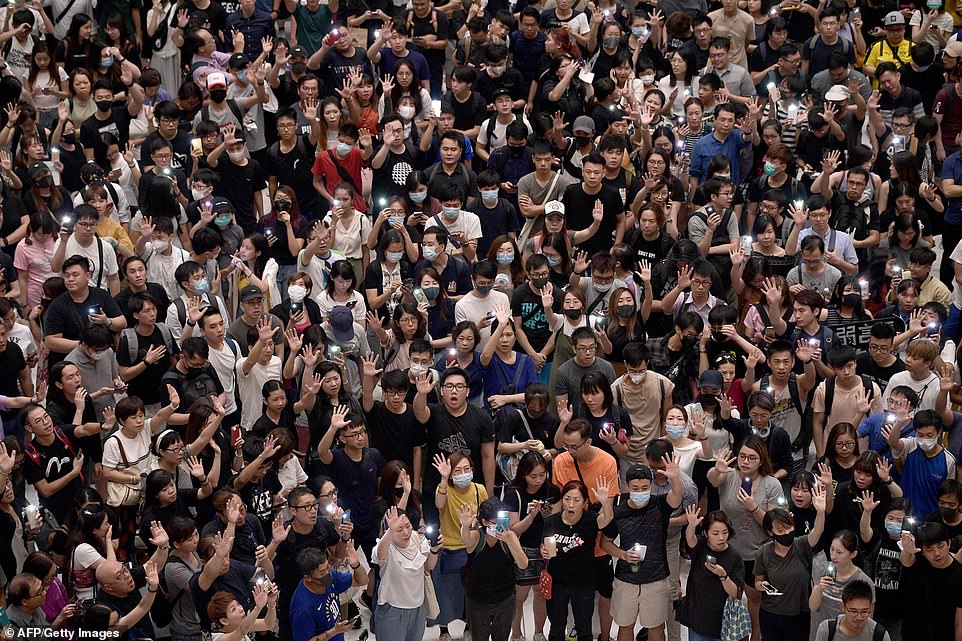 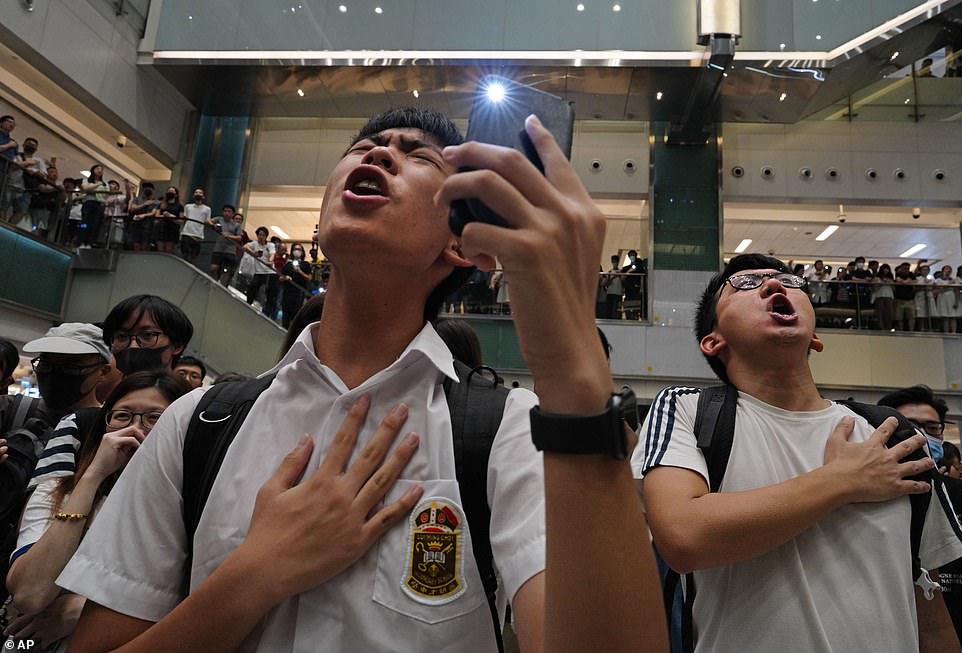 ‘Glory to Hong Kong’, penned anonymously, has been adopted by Hong Kong protesters as their unofficial national anthem 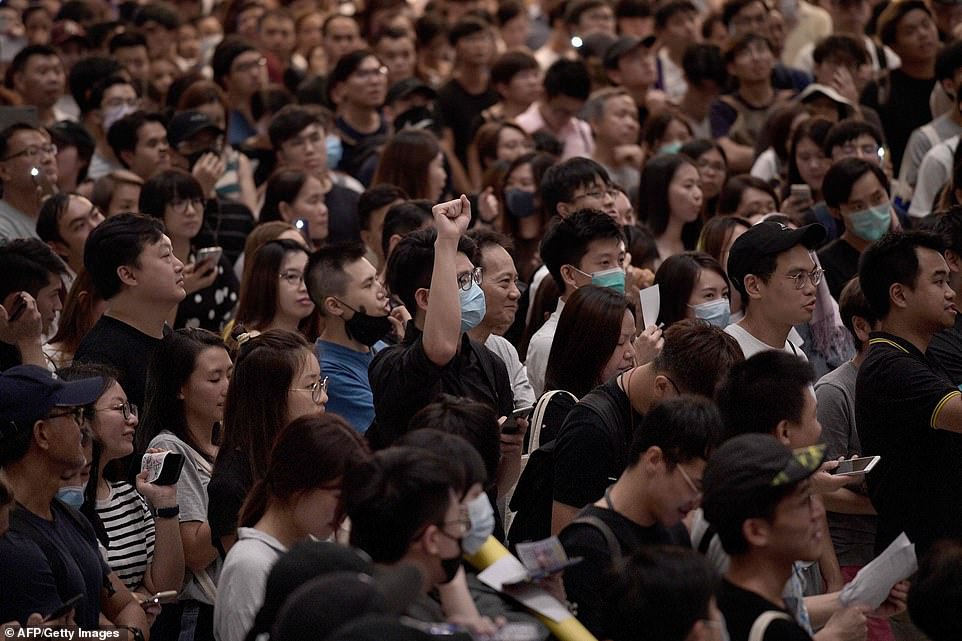 People gather at a shopping mall in the Sha Tin to sing ‘Glory to Hong Kong’ on Wednesday. The lyrics reflect protesters’ vow not to surrender despite a government concession to axe an extradition bill that sparked the summer of unrest

Protesters have also sang the Christian hymn ‘Sing Hallelujah to the Lord’ and the ‘Les Miserables’ tune ‘Do You Hear the People Sing?’ in the on-going movement which has lasted more than three months.

The sing-alongs have boosted protesters’ morale and highlighted their creativity in inventing new ways to get their message heard by the authorities.

Hong Kong has been rocked by an anti-government movement since the beginning of June.

The rallies were first sparked by a law bill that would allow criminal suspects to be sent to mainland China for trial. But the city’s residents are now demanding for wider democratic reforms.

But protesters are continuing to urge Lam to respond to all of their five demands, which also include an independent inquiry into alleged police brutality, immediately release of arrested protesters and the right for Hong Kong people to choose their own leaders. 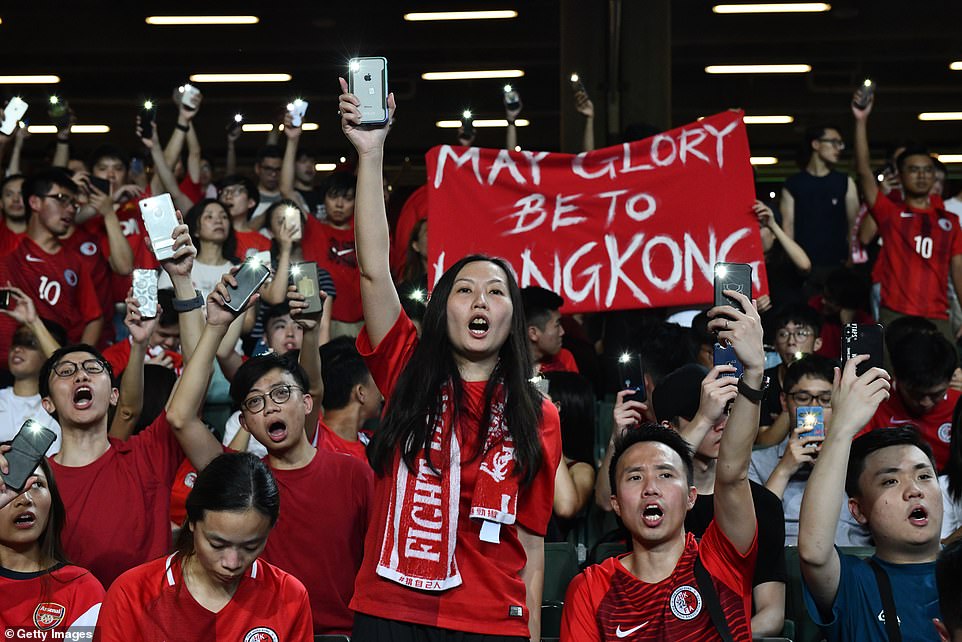 The song has been sung at almost every protest since it emerged on August 31, including during a World Cup qualifier match on Tuesday (pictured) with Iran where Hong Kong soccer fans booed at the Chinese national anthem before kick-off 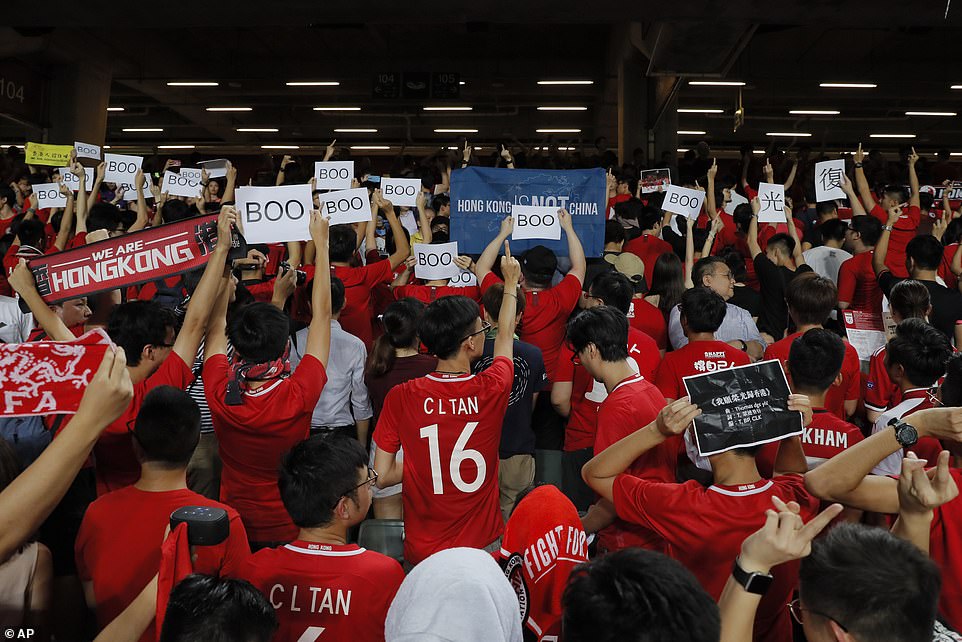 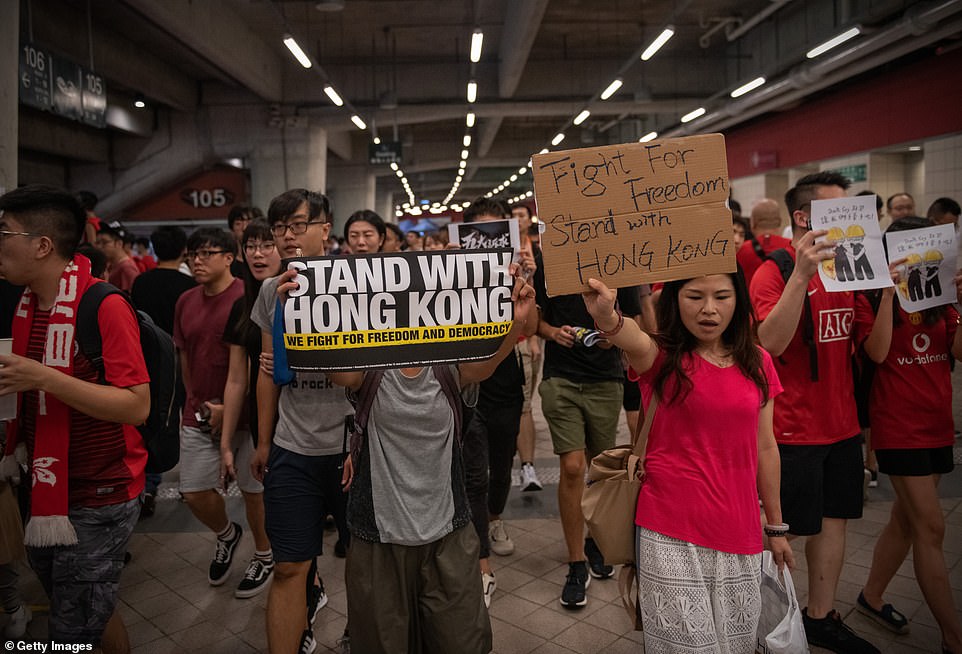 The Civil Human Rights Front, which has organised several massive rallies, said today that it was appealing the police ban on a march it planned on Sunday.

Police had also banned the group’s August 31 march, but protesters turned up anyway. Violent clashes erupted that night, with police storming a subway car and hitting passengers with batons and pepper spray.

Front coordinator Bonnie Leung said police noted the proposed route would pass close to high-risk buildings, including the police headquarters, government offices and subway stations that have been a focus of protests in recent weeks.

She said police also told the group they could not stop protesters from breaking away and carrying out illegal violent acts. But Leung said violent clashes were unrelated to the group.

‘We create a safe zone for people to protest. Our marches are like Hong Kong people giving a chance to the government to end the crisis peacefully but now, they have closed the valve to release public anger. It’s like declaring war to peaceful protesters,’ she told the Associated Press.

Leung accused authorities of trying to provoke protesters to carry out illegal gatherings to find an excuse to crack down. She urged activists ‘not to fall into the trap,’ saying protests can be in many forms and that they should keep safe to sustain the protest movement.