Hospital bomber was a Christian convert known to police

London: At just before 11am on Sunday, a black van pulling up outside Liverpool Women’s Hospital in England blew up. CCTV footage, obtained by the London Telegraph, shows the taxi trundling into view, before arriving at its destination, the drop-off point for the front reception desk at the hospital close to Liverpool city centre. But before the taxi had come to a halt, there was a huge explosion. Grey smoke billowed into the air and parts of the car, including the windscreen, were scattered in all directions.

Luckily, the hospital drop-off was almost empty of passersby and nobody seems to have been hit by flying debris. In the seconds that follow, a man in a high-vis jacket – possibly a security guard – races from the bottom left of the screen in the direction of the explosion. As he reaches the car, the taxi driver throws open his door and runs for his life. The smoke clears for a fraction of a second as the two men sprint to safety. 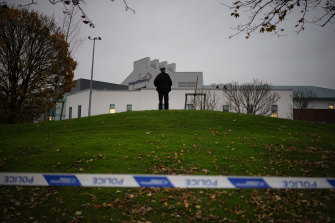 Inside the car, the bombmaker – named by police as Emad al-Swealmeen – remains seated. He is about to die. A little over 30 seconds after the initial explosion, a small orange flame flickers from what appears to be the front passenger seat of the car. A black cloud begins to billow from the taxi, believed to be a Toyota Prius-Plus, and within seconds flames have enveloped the car.

Experts suggested Swealmeen, 32, an asylum seeker from the Middle East, who had converted to Christianity four years ago, would have burnt to death; that the initial explosion, almost certainly the detonator going off – rather than the bomb itself – would not have been fatal.

Miraculously, the taxi driver escaped almost unscathed. “There was a large explosion which blew out all of the windows and sent the windscreen flying into the air,” said an eyewitness, adding: “It is extraordinary that the driver managed to survive, let alone escape.”

As the car was going up in flames, just a kilometre away at Liverpool’s Anglican cathedral, a Remembrance Sunday service was under way.

The event normally takes place at St George’s Hall in the heart of the city but had been switched to the cathedral because of road and building works in the centre.

The service remains an important event in the Liverpool calendar, attracting a crowd of 1200, among them military veterans and dignitaries. At the end of the service just as a “poignant poppy drop” was being planned, the bomb exploded.

Counter-terrorism police and security services are working on the “logical” theory that Swealmeen had been intending to walk from the hospital and into the crowds as they left the service.

On Monday, the Joint Terrorism Analysis Centre raised the UK threat level from substantial – meaning an attack is likely – to severe, meaning it is highly likely.

The motivation for the attack remains unclear, however, and intelligence sources said they were keeping an open mind because Swealmeen had suffered from mental health issues and because of his conversion to Christianity rather than radical Islam.

Improvised explosive devices are one of the weapons of choice for jihadists. The investigation will focus on where Swealmeen learnt to make a bomb. It is understood he had a Syrian father and an Iraqi mother, and was born in Iraq.

Swealmeen’s conversion in 2017, having arrived in the UK some years ago, makes the picture complex for investigators.

He had spent most of his time in Liverpool and was known to the police, having been arrested in 2014 for brandishing a knife in the city centre.

Swealmeen had also taken the name Enzo Almeni while living in the UK, choosing Enzo in deference to Enzo Ferrari, the racing driver and founder of the car company.

Swealmeen converted to Christianity in March 2017 at Liverpool’s Anglican cathedral, reinforcing the theory he may have been targeting the Remembrance Sunday service.

Liverpool’s then bishop, the Right Reverend Cyril Ashton conducted the confirmation ceremony. Last night the bishop said he could not recall the young man pictured at his side.

The same year, under his Westernised name, Swealmeen posted photographs of the area including the cathedral and even declared a takeaway restaurant “soooo cheap!” and remarking on his first “skin fade haircut” at a hairdressing salon in nearby Aigburth.

He spent eight months living with Malcolm and Marion Hitchcott, committed Christians, in their home there in 2017.

“He first came to the cathedral in August 2015 and wanted to convert to Christianity,” Hitchcott said. “He took an Alpha course, which explains the Christian faith, and completed it in November of that year. That enabled him to come to an informed decision and he changed from Islam to Christianity and was confirmed as a Christian by at least March 2017, just before he came to live with us. He was destitute at that time and we took him in.”

At about 10.50am, the taxi, driven by David Perry, picked up Swealmeen from a semi-detached Victorian house in Rutland Avenue, Liverpool, a tree-lined street off Sefton Park, where many of the large properties have been subdivided into bedsits and flats. Swealmeen had “recently rented” the address and is believed to have used it as his factory to make the bomb.

He had called the cab company and asked to be taken to the hospital, a 10-minute drive away. Swealmeen clambered into the taxi, carrying his bomb in a bag, and began the short journey to his death.

Speaking to the media 24 hours after the attack, Assistant Chief Constable Russ Jackson, head of counter-terrorism policing in the North West, said: “As the taxi approached the drop-off point at the hospital, an explosion occurred from within the car, which quickly engulfed it in flames.

“Remarkably, the taxi driver escaped from the cab. He has been treated for the injuries he sustained and has now been released from hospital.”

Emergency services raced to the scene and firefighters extinguished the flames “when it quickly became apparent that the passenger remained in the vehicle and was deceased”, Jackson said.

One former counter-terror officer, with expertise in improvised explosive devices, said the footage obtained by The Telegraph suggested the detonator had gone off in the taxi, but the main charge had not. The source said the device was likely to have been built using triacetone triperoxide (TATP) – the same substance that was used in the Manchester Arena suicide bombing four years ago.

Using the materials discovered in the suspect’s flat and evidence recovered from the scene of the bombing, forensics specialists are attempting to understand how Swealmeen could obtain the materials to build the device.

”It is likely the bomber has been attempting to do that when the detonator has gone off in the cab, killing him and injuring the driver,” a source said.

“But, mercifully, the charge for some reason has not gone off. It could be that the chemical mix was wrong or that the device had not been constructed properly.”

An army bomb disposal squad attended the hospital “and made the area safe” and after investigation was “able to confirm that this is being treated as the ignition of an explosive device,” Jackson said.

He added: “Our inquiries also indicate that the device was brought into the cab by the passenger.”

MI5 can find no record of Swealmeen on any of their watchlists, either under his real name or the Westernised alternative.

They cannot rule out that he may have used other identities but so far can find no evidence of him being on their radar.

As police were officially declaring the planned bomb attack a terrorist incident, the senior officer in charge admitted: “It is not clear what the motivation for this incident is.”

Jackson said: “Our inquiries indicate that an improvised explosive device has been manufactured and our assumption so far is that this was built by the passenger in the taxi.

“The reason why he then took it to the Women’s Hospital is unknown, as is the reason for its sudden explosion.

“We are, of course, aware that there were Remembrance events just a short distance away from the hospital and that the ignition occurred shortly before 11am. We cannot at this time draw any connection with this but it is a line of inquiry we are pursuing.”

In the hours after the hospital explosion, armed counter-terror police raided two properties that the dead bomber had lived in – the house where he was picked up and was believed to have most recently lived and another in the Kensington area of the city, north of the Women’s Hospital.

On Sunday evening, three men, aged 21, 26 and 29, were arrested in Kensington under section 41 of the Terrorism Act. A fourth man, aged 20, was also detained in the area, later.

Sharon Cullen told how she and her husband, 22-year-old daughter and two-year-old grandson were evacuated from their home at about 9.45pm on Sunday: “The police pounded on my door and an officer said ‘we need to get you out of the house as soon as possible’.

“They said: ‘Whatever is going on at the back of the house, it could blow the block.’ It was really frightening.”

Photographs showed police officers, in fatigues and body armour, and armed with semi-automatic weapons, climbing ladders to peer over the back wall of the second house.

Matthew Heitman, 26, who lives opposite, said: “Two of the men were marched out at gunpoint and they had them up against the wall. There wasn’t any kind of struggle, they just walked out of the front. The people living there had not long moved in, maybe weeks or months.”

At just after 4pm on Monday (Tuesday AEDT) police carried out a controlled explosion in the middle of Sefton park, a few hundred metres from the original house.

Eyewitnesses described a “bang” and a “puff of smoke”.

Forensic teams moved in to search the houses in Rutland Avenue, where police said “significant items have been found and further searches will be necessary today and potentially into the coming days”.

Sources suggested this included bombmaking equipment, making the search dangerous and time-consuming. A cordon was put in place in the street and eight families evacuated for their own safety.

Prime Minister Boris Johnson condemned the “sickening attack” and said that the British people “will never be cowed by terrorism”.

“We will never give in to those who seek to divide us with senseless acts of violence,” he said.

The hospital also remained cordoned off as investigators combed through the wreckage.

Liverpool remained on high alert. Terror had come to the city. What is still unclear is why.