POUNCING in a vast and breathless raid, armed agents smash through doors of a commune in the Siberian wilderness as choppers swarm overhead.

Although some 4,000 diehard believers live at this site, the dozens of Russian security forces are focused on arresting just one man in particular: Jesus. 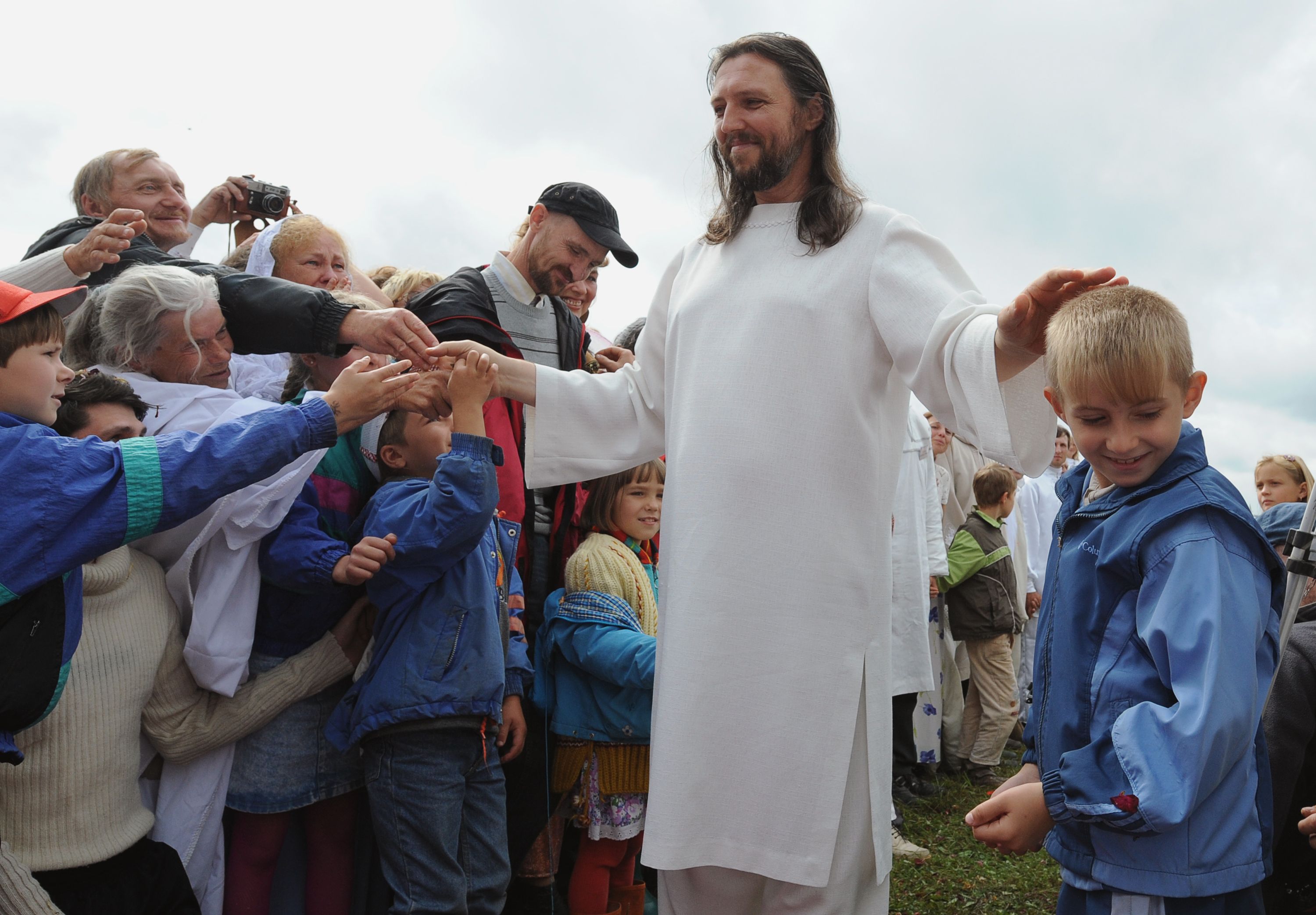 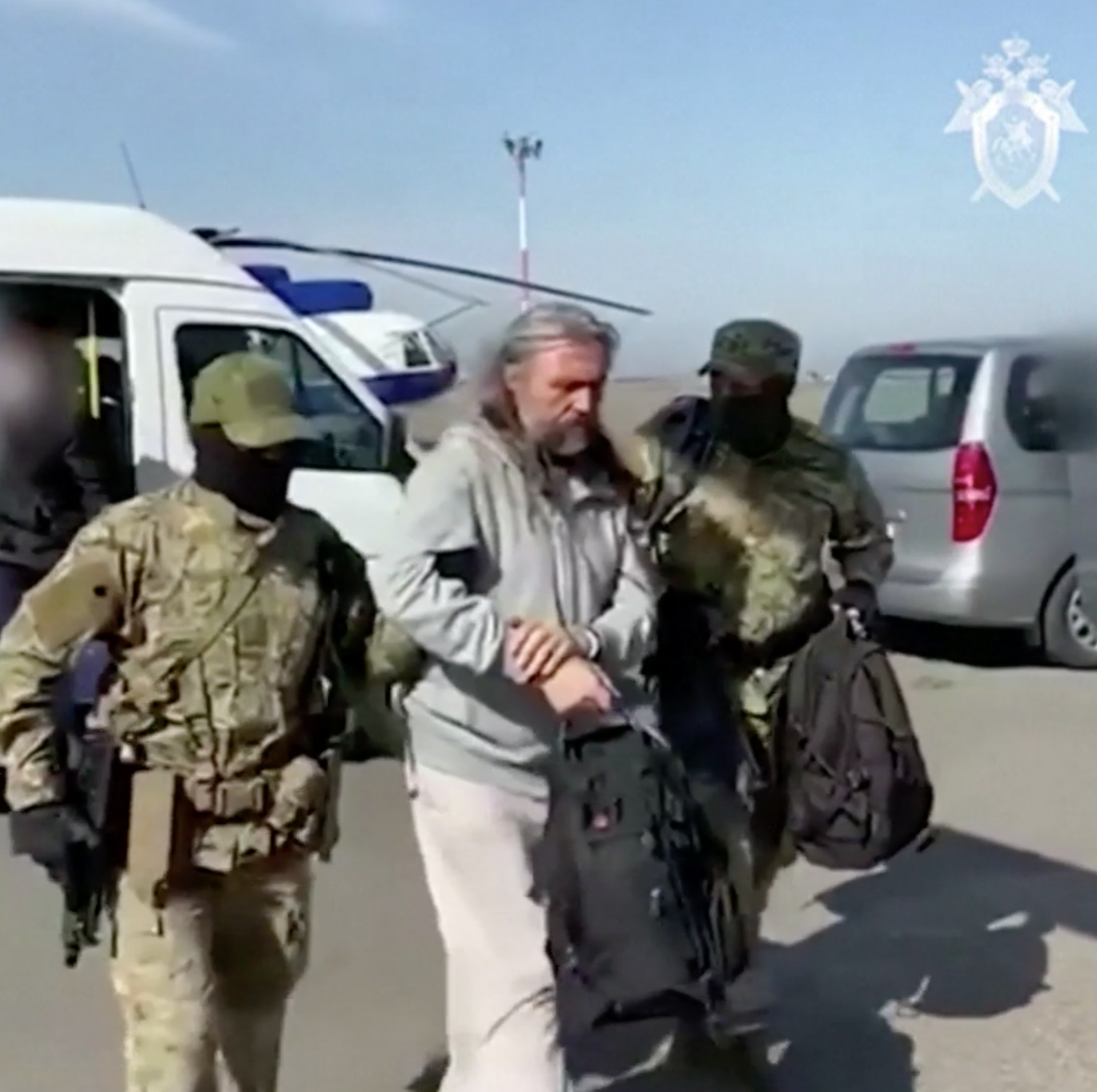 Or, at least, a man who claims he's the reincarnation of Jesus – Sergey Torop, an ex-traffic cop who founded the controversial Church of the Last Testament in Siberia in the 1990s and who was arrested this week.

The 59-year-old, who calls himself Vissarion, filled an ideological vacuum in the lives of his thousands of cult followers when the Soviet Union collapsed thirty years ago.

His messianic teachings order his fans, known as Vissarionites, to follow strict rules of no meat-eating, no smoking, no drinking, and no money exchange.

They've lived this way since establishing his first settlement in Tiberkul in 1994 – but Russian authorities say Torop and his inner sanctum have been using "psychological violence" to extort money from his followers. 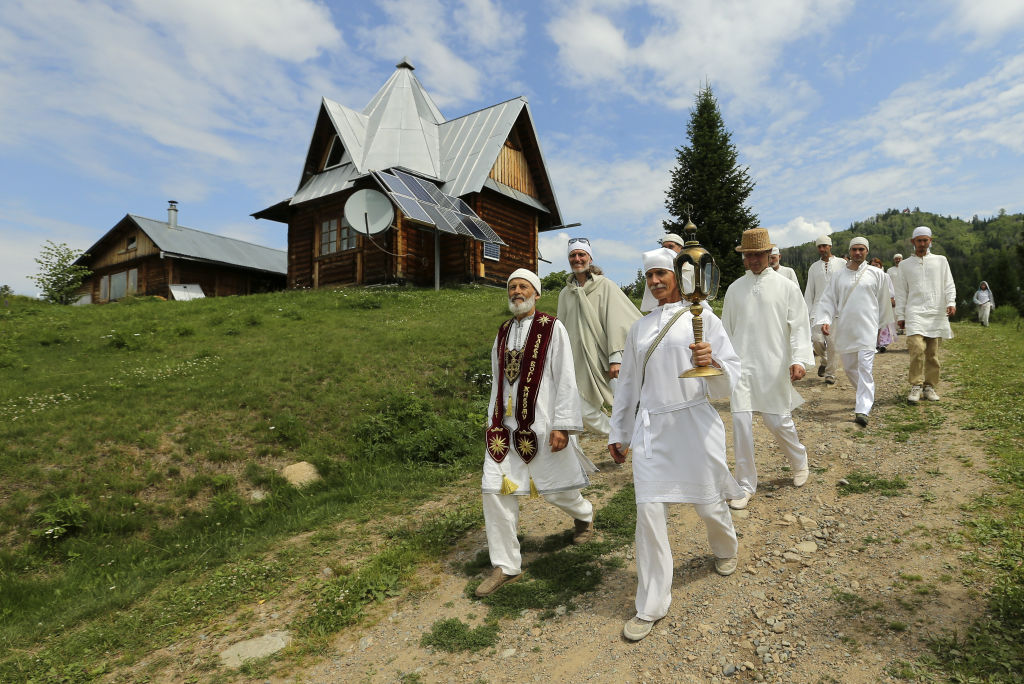 'I am Jesus Christ'

Torop was a 29-year-old police officer in the small town of Minusinsk when, in 1989, he had a revelation that he was the son of God.

His holy awakening came just after job cuts made him redundant and the USSR was spiralling in terminal decline. 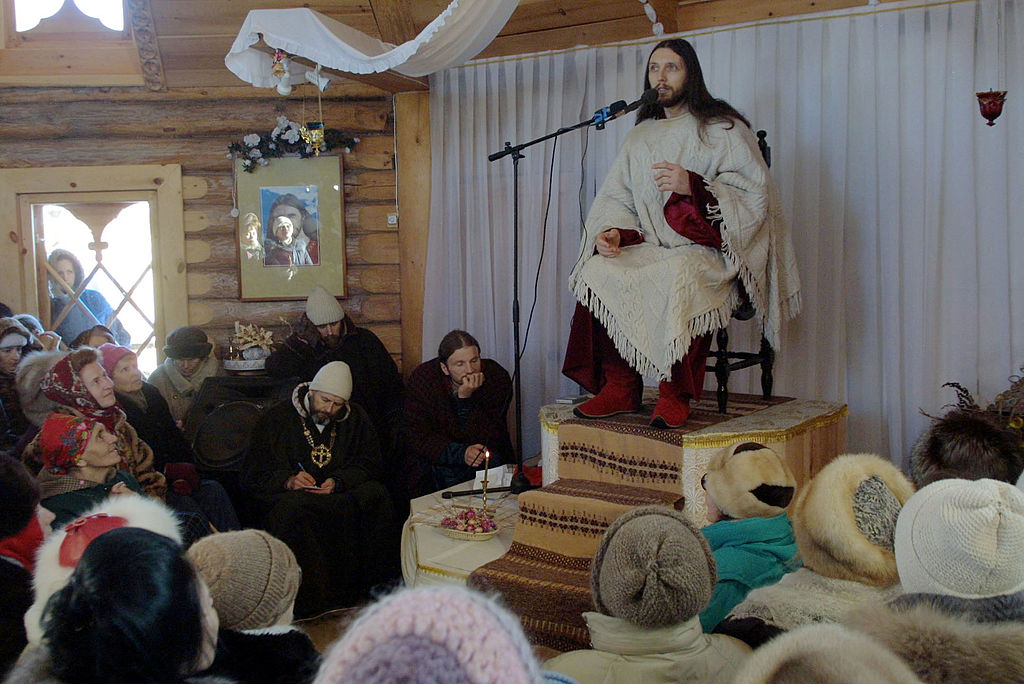 "It's all very complicated," Torop told The Guardian in 2002. "But to keep things simple, yes, I am Jesus Christ."

"I am not God," he added. "And it is a mistake to see Jesus as God. But I am the living word of God the Father.

It's all very complicated. But to keep things simple, yes, I am Jesus Christ

"Everything that God wants to say, he says through me."

He set up his ministry, the Church of the Last Testament, in 1991.

And four years later he and his followers moved deep into the Siberian wilderness to the Kuraginsky district to establish their town, Sun City. 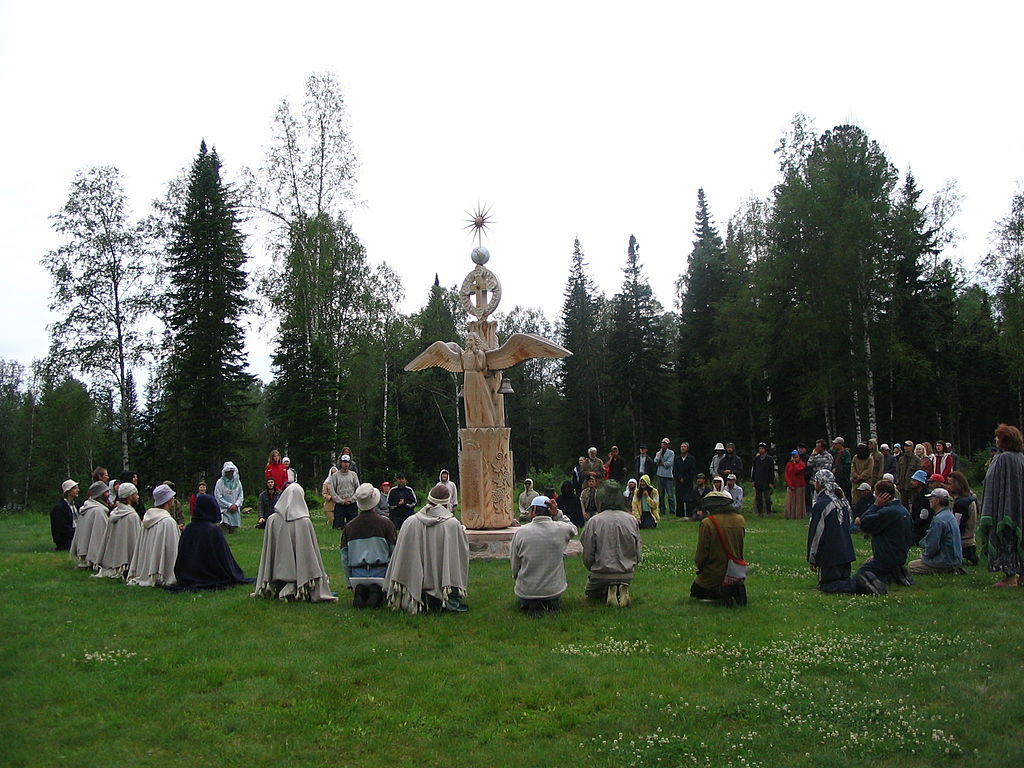 Some 4,000 people from all over the world wear white robes and live in simple wooden huts in the remote settlements which are connected by dirt roads.

And his followers – estimated to stretch to 10,000 globally – are absolutely dedicated to him. 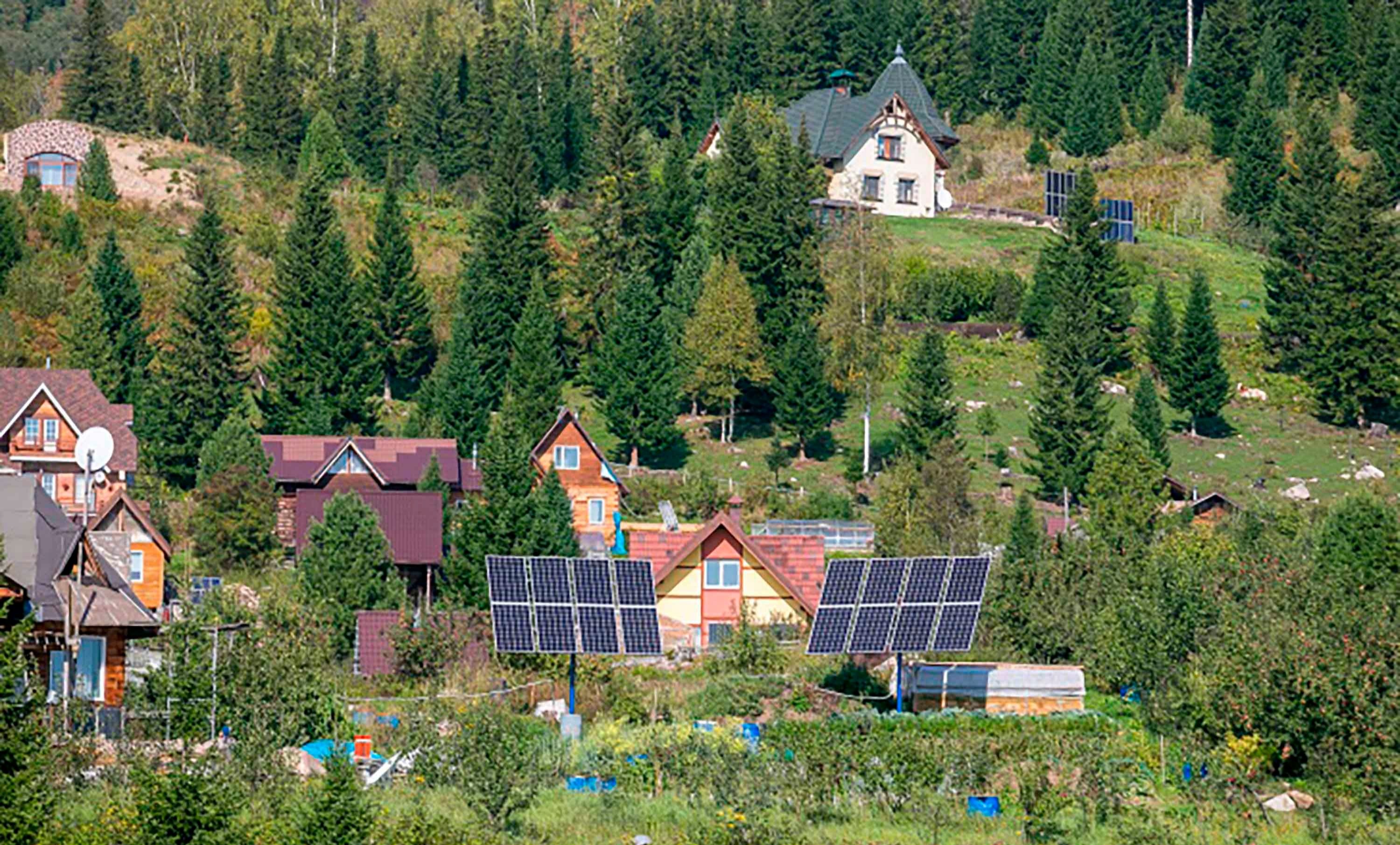 So much so that their calendar only dates from 1961, the year Torop was born, and they have a feast day on his birthday, January 14, instead of celebrating Christmas.

A large bell tolls from a mountain above the valley where they live three times a day, at which point followers must drop to their knees and pray.

It's difficult to understand why so many people from all over the world would choose to give up their comfortable lives to follow Torop in the harsh Siberian taiga – especially given his wacky beliefs.

Some people were drawn to Torop's vision when communism fell, attracted to its deep sense of community as Soviet society unravelled.

Others appear to have joined the church because they wanted to drop out society and live a simpler life in the mountains, with Torop's strange teachings a secondary consideration. 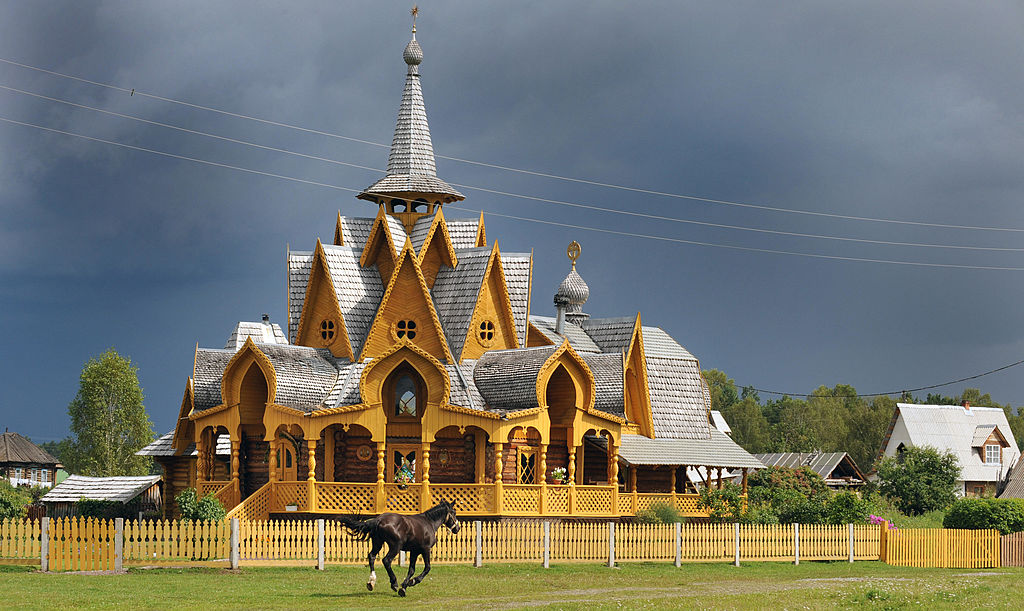 It's said he originally claimed that Jesus was in low Earth orbit and that the Virgin Mary was "running Russia", only later deciding that he was Jesus.

He's reportedly also claimed to be able to cure Aids and cancer with his healing touch.

The cult has even been accused of believing in aliens in the form of something called the "outer-space minds", with some members reportedly insisting they have encountered UFOs.

And while some of Torop's teachings are similar to those of the Russian Orthodox church, its stringent bans on most modern technology, alcohol, and even swearing have led some critics to see the cult as extreme.

Environmentalism is also central to the church's practices and they predict some kind of apocalyptic event in the near future, although it's not exactly clear when it will happen.

"It's preferable that the chaos vigorously demonstrated by human civilisation will end soon." 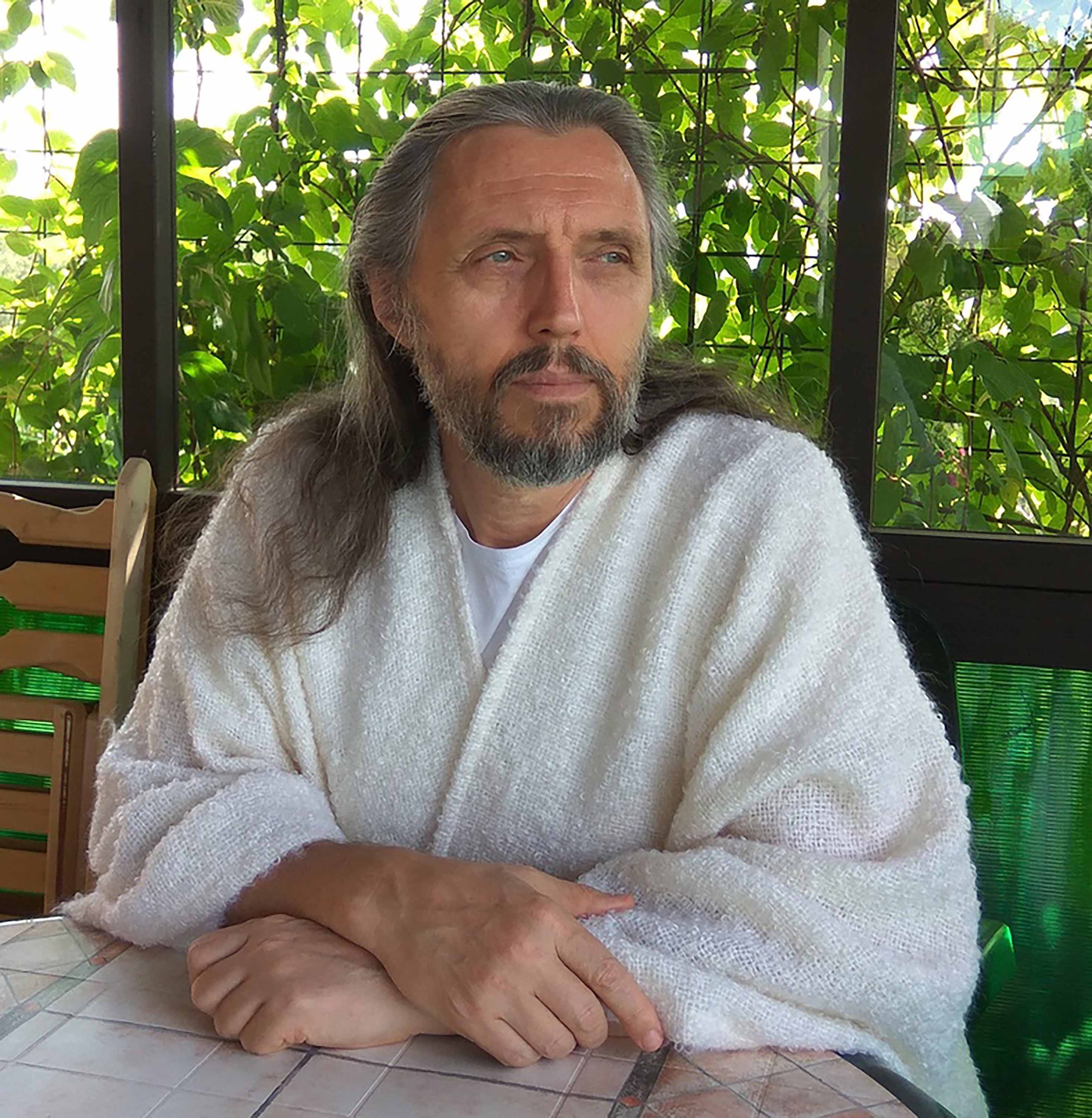 All of Torop's beliefs are recorded in a multi-volume work called The Last Testament, which is treated as a kind of sequel to the New Testament.

The bizarre scripture is taught in the communes' schools, where little boys and girls are educated separately and gender roles are strongly enforced – males are masters while females are obedient followers.

Torop's most dedicated 300 followers live on top of a remote hill call the Abode of Dawn – but his image hangs on the wall in all Vissarionite homes.

Despite living modestly, Torop's expensive international trips to preach around the world have raised eyebrows from some who questioned if he was living off his follower's cash. 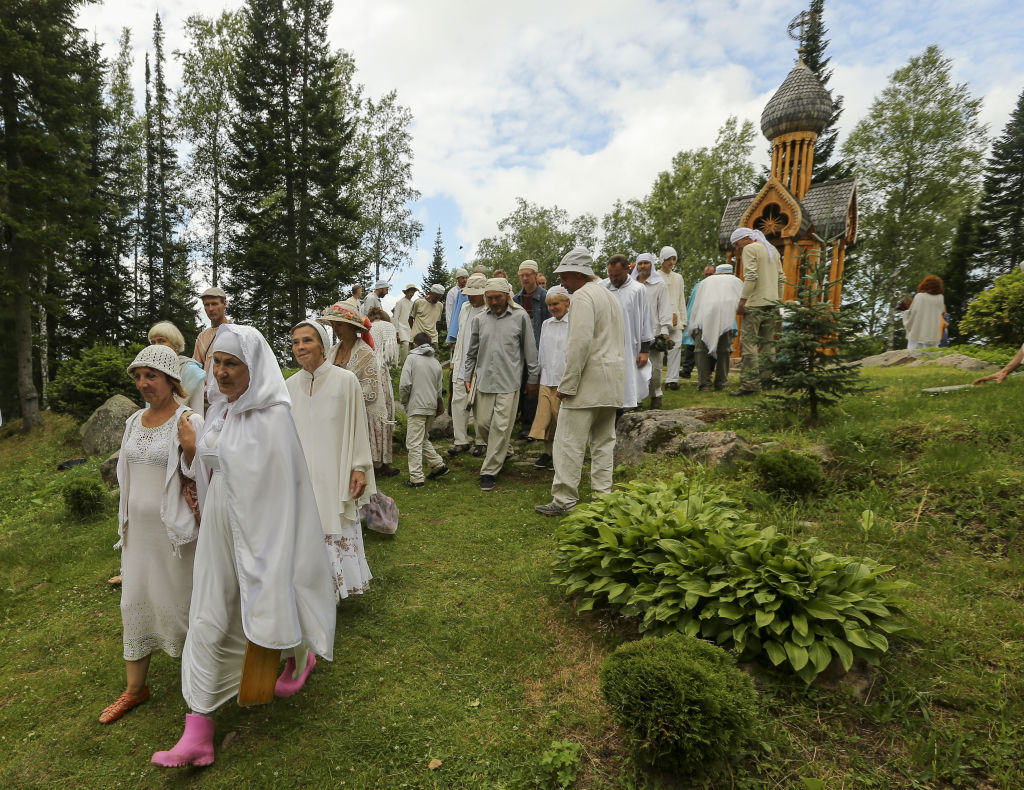 "He's the only person I know who lives what he preaches," says Vadim Redkin, a former rock drummer who became Torop's right-hand man.

"They say he's a liar and a cheat, taking the money.

"They're only describing the way they behave themselves."

Redkin himself was arrested alongside Torop earlier this week.

Despite being largely ignored by Russian authorities for the last decade, cops searched the Abode of Dawn in February this year looking for evidence of sexual assault and corruption, Moscow Times reports. 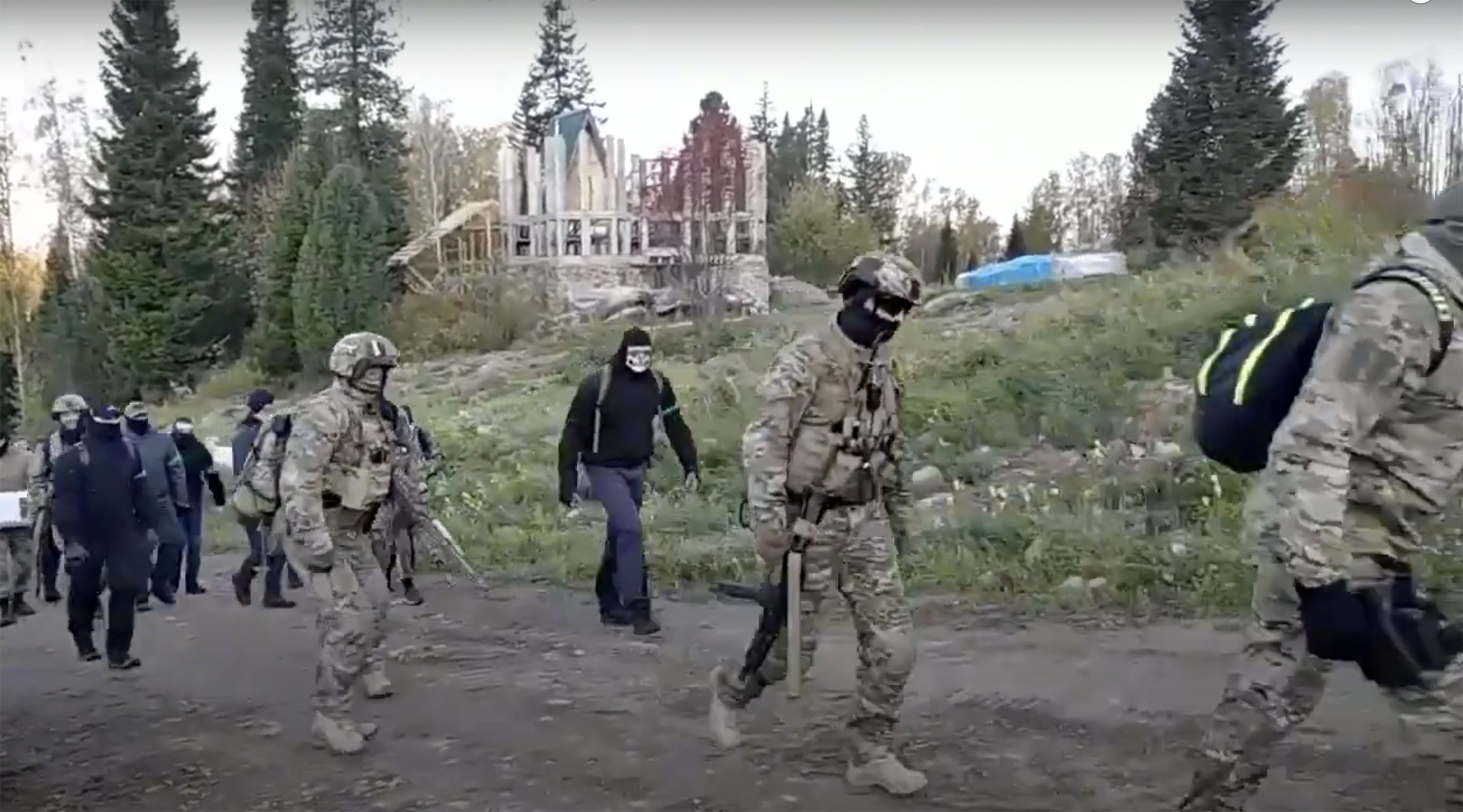 But the isolated cult's fortunes improved with the outbreak of the pandemic, which not only appeared to end the police investigations, but also saw a surge of interest from new recruits.

"People are searching for something and have become attracted to our lifestyle," Redkin said.

"Requests to join us have tripled since the start of the virus.

"We get emails from Europe, South America and North America."

But the cult now faces its own personal apocalypse with its leader in handcuffs. 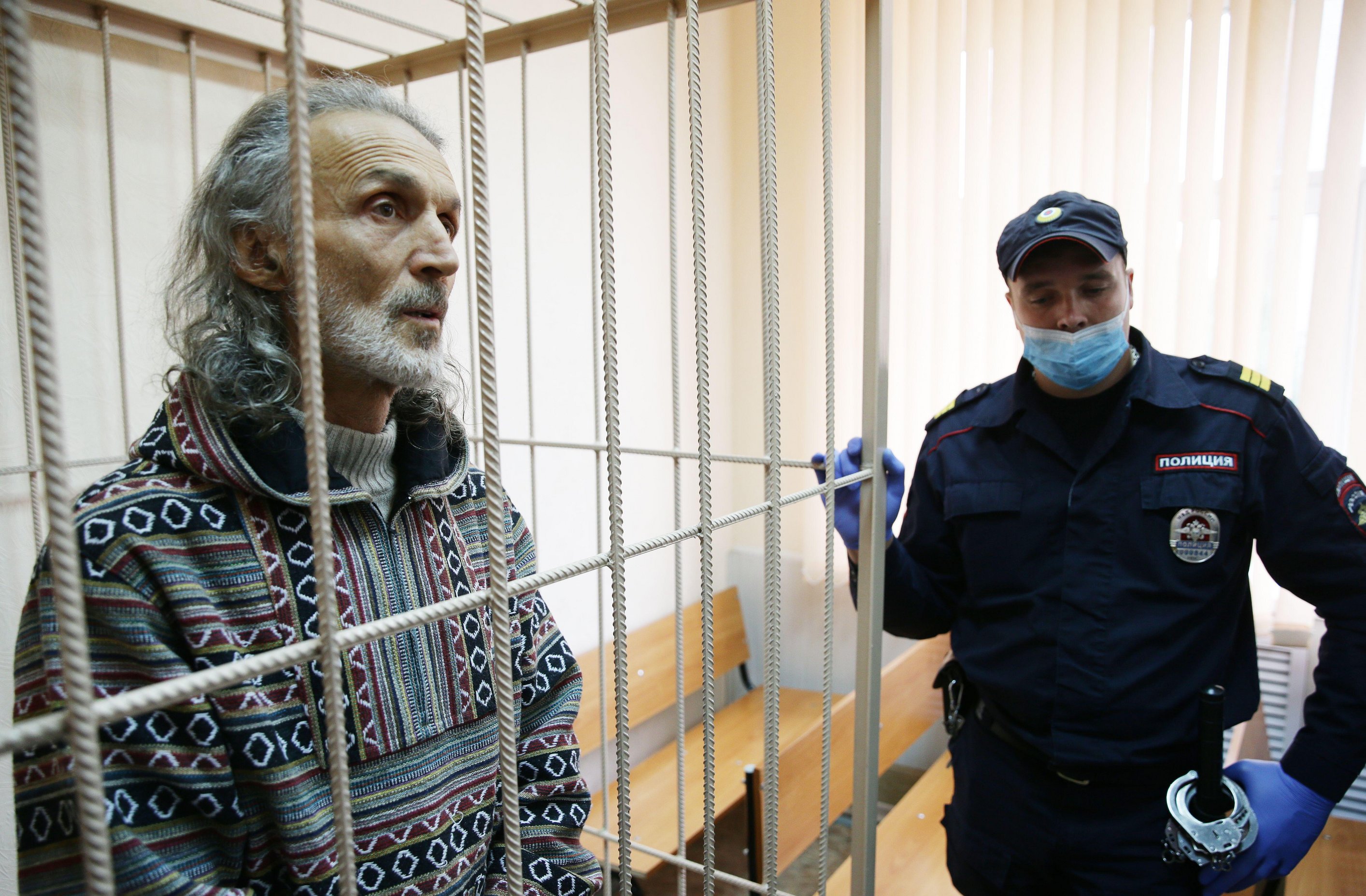 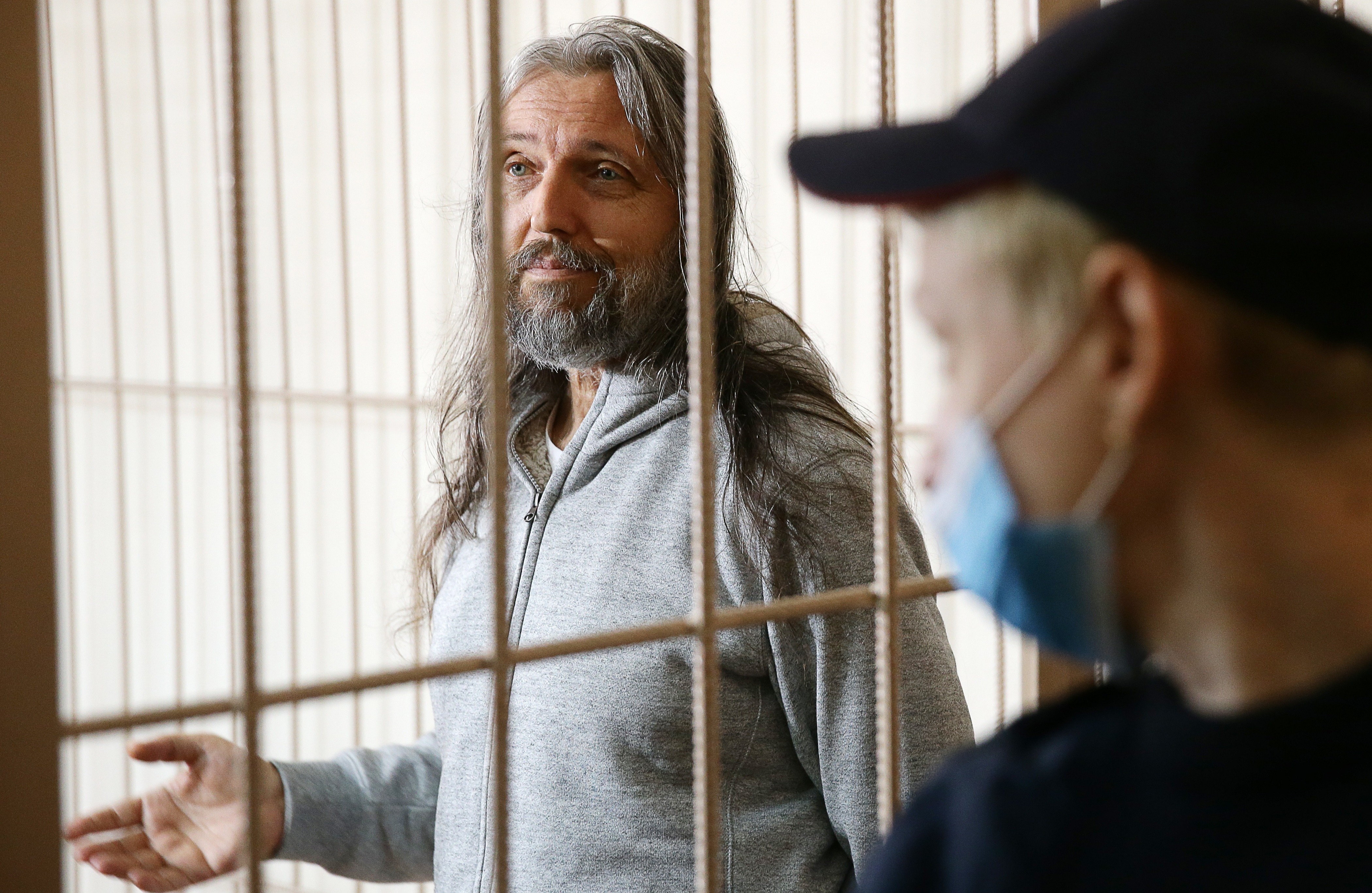 Masked men armed with assault rifles were filmed loading a handcuffed Torop into a helicopter.

Russia's investigative committee says it will charge him with running an illegal religious organisation.

It also alleges that Torop extorted believers' money, subjected them to emotional abuse, and caused "serious harm" to their health.

If convicted, he could face eight years in prison.

In recent years, the Kremlin has been cracking down on religions that deviate from the Russian Orthodox church, which is a powerful ally of Putin's regime.

The government passed a law in 2016 which outlawed sharing religious beliefs in public – but so far it's only been applied to historically non-Russian faiths like Mormonism and Jehovah's Witnesses.

But Moscow-based religious expert Roman Lunkin doesn't think Torop was arrested because he was viewed as a threat to the Orthodox church.

"Law enforcement was spooked because [the sect] was incomprehensible to them," Lunkin told The Times.