Voters endorsed Orban’s ambition of a conservative, ‘illiberal’ state and shrugged off concerns over Budapest’s close ties with Moscow.

But he mounted a successful campaign to persuade his Fidesz party’s core electorate that the six-party opposition alliance of Peter Marki-Zay promising to mend ties with the European Union could lead the country into war, an accusation the opposition denied.

In his victory speech, Orban took aim at Zelensky and the EU, saying: ‘We never had so many opponents,’ as he reeled off a list that comprised of ‘Brussels bureaucrats… the international mainstream media, and finally the Ukrainian president.’ 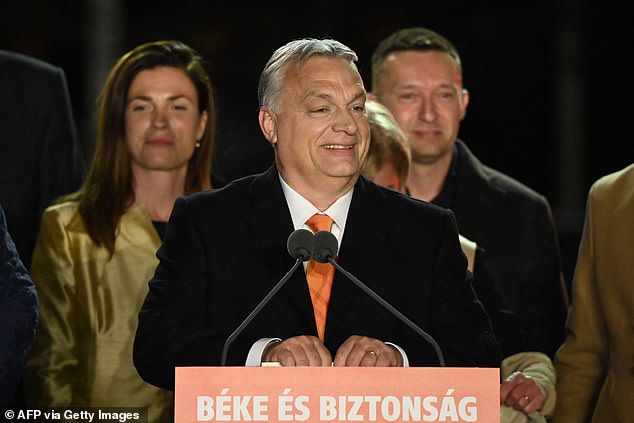 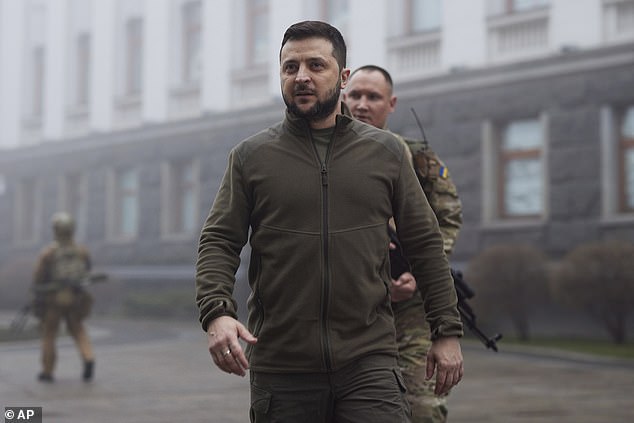 In his victory speech, Orban took aim at Zelensky (pictured), describing him as one of his ‘opponents’

‘We won a victory so big that you can see it from the moon – and you can certainly see it from Brussels,’ added Orban, who has often been condemned by the EU for overseeing democratic backsliding and alleged corruption.

Zelensky has singled Orban out for criticism over his reticence to take a tougher stance against Russia.

While the opposition called for Hungary to support its embattled neighbor and act in lockstep with its EU and NATO partners, Orban, a longtime ally of Putin, has insisted that Hungary remain neutral and maintain its close economic ties with Moscow, including continuing to import Russian gas and oil on favorable terms.

At his final campaign rally Friday, Orban claimed that supplying Ukraine with weapons – something that Hungary, alone among Ukraine’s EU neighbors, has refused to do – would make the country a military target, and that sanctioning Russian energy imports would cripple Hungary’s own economy.

‘This isn’t our war, we have to stay out of it,’ Orban said.

The president of Ukraine, Volodymyr Zelenskyy, on Saturday depicted the Hungarian leader as out of touch with the rest of Europe, which has united to condemn Putin, support sanctions against Russia and send aid including weapons to Ukraine.

‘He is virtually the only one in Europe to openly support Mr. Putin,’ Zelenskyy said.

Based on preliminary results, the National Election Office said Fidesz would have 135 seats, a two-thirds majority, and the opposition alliance would have 56 seats. A far-right party called Our Homeland would also make it into parliament, winning 7 seats.

His comfortable victory could embolden Orban, 58, in his policy agenda which critics say amounts to a subversion of democratic norms, media freedom and the rights of minorities, particularly gay and lesbian people.

Conceding defeat, Marki-Zay, 49, said Fidesz’s win was due to what he called its vast propaganda machine, including media dominance.

‘I don’t want to hide my disappointment, my sadness … We knew this would be an uneven playing field,’ he said. ‘We admit that Fidesz got a huge majority of the votes. But we still dispute whether this election was democratic and free.’

The Organisation for Security and Cooperation in Europe (OSCE) sent a full-scale election monitoring mission for the vote, only the second such effort in an European Union member state.

One of Europe’s longest-serving leaders, Orban has emerged as a vocal supporter of anti-immigration policies and an opponent of tough energy sanctions against Moscow. 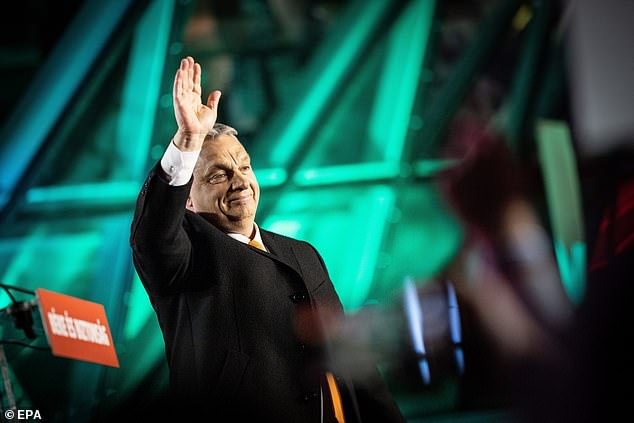 One of Europe’s longest-serving leaders, Orban (pictured on Sunday) has emerged as a vocal supporter of anti-immigration policies and an opponent of tough energy sanctions against Moscow 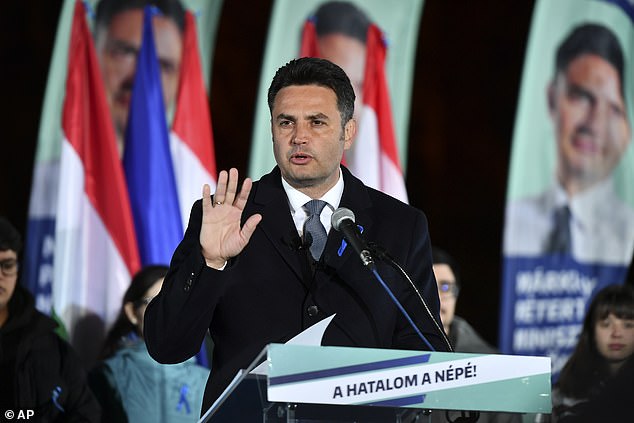 Critics say he has sought to cement one-party rule by overhauling the constitution, taking control of a majority of media outlets and rejigging election rules, as well as staffing key government posts with loyalists and rewarding businessmen close to Fidesz with lucrative state contracts.

Still, he wins favour with many older, poorer voters in rural areas who espouse his traditional Christian values and with families who benefit from a host of tax breaks and price caps on fuel and some foodstuffs.

The election comes at a time when global energy woes and steep labour shortages in the region have fuelled inflation increases throughout central Europe. Consumer price growth reached an almost 15-year high of 8.3% in February in Hungary.

Critics say the public perception of the war has been influenced by state-controlled media which have amplified Orban’s accusations that an opposition-led government would support sanctions on Russian gas shipments and put Hungary at risk by shipping weapons to Ukraine.

With voting under way throughout Hungary, Ukraine accused Russian forces of carrying out a ‘massacre’ in the town of Bucha, while Western nations reacted to images of dead bodies there with calls for new sanctions against Moscow.

Orban has condemned the Russian invasion, which the Kremlin describes as a ‘special military operation’ and has not vetoed any European Union sanctions against Moscow even though he said he did not agree with them.

But he has banned any transport of arms to Ukraine via Hungarian territory, facing criticism from his nationalist allies in Poland, and said benefits of close ties with Russia include gas supply security.

His victory, however, is a relief for Warsaw’s nationalist Law and Justice government which has relied on his backing in Brussels to counter penalties over rule of law breaches.