Passengers on a light plane in the Northern Territory had a mid-air scare after an enormous huntsman spider fell from the plane’s cabin roof into the pilot’s lap.

The Cessna had just been for a scenic flight over Kakadu National Park and was coming in to land when the terrifying stowaway was spotted.

NSW tourist Sean Hancock, who was in the plane with his wife Colleen, said the pilot was a little shaken after the spider fell onto his lap as he approached the Outback runway.

Afraid of flying and spiders? This might be your worst nightmare… A giant huntsman dropped on top of a panicked pilot, as the small plane was landing at a Northern Territory airfield. STORY: http://9Soci.al/tU8a30rKWwv #9News | Nightly at 6.00pm

‘He’s panicking, trying to brush it off his leg. He wasn’t a fan at all,’ Mr Hancock told 9News.

He explained the pilot first noticed the spider when he glanced over to his wife who simply pointed up to the roof.

Knowing the spider was a harmless huntsman Mr Hancock – who already had his phone out filming the plane’s landing – said he burst out laughing.

‘He’d have been a good 15-centimetres across. He was a big boy.’

Workers on the plane had seen the spider days earlier but thought it had scurried off.

Thankfully the plane landed without incident. 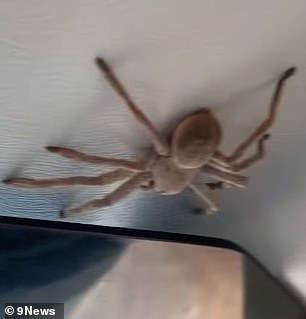 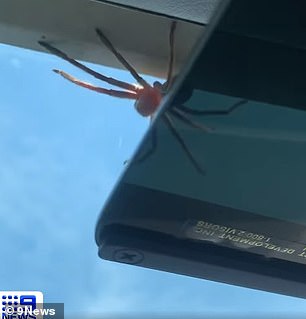