Idaho Governor Brad Little has signed into law two anti-transgender bills, one of which would prevent transgender girls and women from competing in women’s sports.

The Republican governor also approved legislation that prohibits transgender people from changing the sex listed on their birth certificates.

The birth certificate measure ignores a 2018 federal court ruling that a past law barring transgender people from making the birth certificate changes violated the Equal Protection Clause of the US Constitution. The judge scrapped the ban and warned against new rules. The Idaho attorney general’s office, which didn’t appeal the ruling, said it could cost $1 million if the state had to defend the ban again and lost.

‘There’s an injunction that already absolutely forbids this policy, and the government can’t enforce this law without violating a court order,’ said Peter Renn of Lambda Legal, the law firm that represented two transgender women whose lawsuit led to the court ruling. ‘The ramifications of contempt (of court) are quite furious.’ 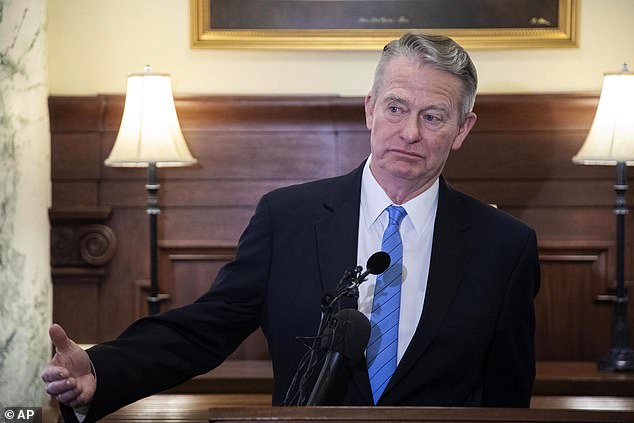 Idaho Governor Brad Little has signed into law two anti-transgender bills, one of which would prevent transgender girls and women from competing in women’s sports. The Republican governor also approved legislation that prohibits transgender people from changing the sex listed on their birth certificates

He said the court could impose fines and hold top officials at the Idaho Department of Health and Welfare responsible should the court order be violated.

Backers of the legislation said the federal court was wrong, and the law is needed so Idaho has accurate birth records. It takes effect July 1.

The sports ban applies to all sports teams sponsored by public schools, colleges and universities. A girls’ or women’s team will not be open to transgender students who identify as female.

Backers said the law was needed because transgender female athletes have physical advantages.

Opponents said it discriminated against transgender girls and women, and would subject athletes to invasive tests to prove their gender, likely causing some potential athletes to avoid sports.

Republican Rep. Barbara Ehardt, who sponsored the sports ban, has consistently argued that allowing the practice would negate Title IX, the 1972 law barring sex discrimination in education and is credited with opening up athletic competition for girls and women. 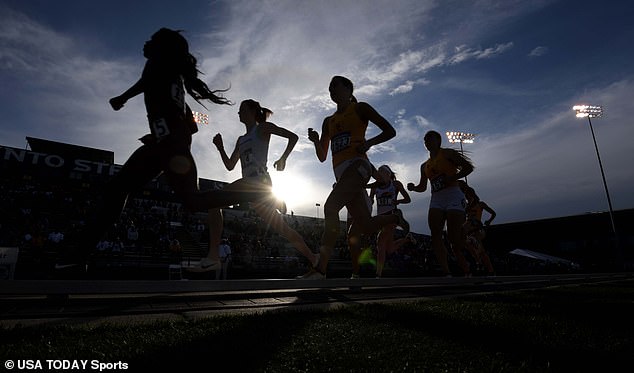 The sports ban applies to all sports teams sponsored by public schools and colleges. A girls’ or women’s team will not be open to transgender students who identify as female

She didn’t return a call from The Associated Press on Monday.

Both the anti-transgender bills had overwhelming support among Republicans in the House and Senate in numbers great enough to override a veto. Rather than wait out a potential veto, though, both chambers adjourned earlier this month because of coronavirus concerns and would have been powerless to override vetoes.

‘We condemn Governor Little’s actions and the actions of dozens of Idaho legislators who are so focused on pleasing their bigoted base instead of doing what is right,’ said Mistie Tolman, Idaho director for Planned Parenthood Votes Northwest and Hawaii, adding the laws make Idaho one of the ‘cruelest states in the country.’

Across the US, more than 40 bills were introduced this year targeting transgender youth. About half, like one of the Idaho bills, sought to ban transgender girls from competing at various levels of girls’ sports. Another large batch of bills sought to ban certain types of gender-transition medical treatment for minors.

None of these bills have been enacted, and most have died. In some other states – including Ohio, Alabama, Tennessee, Kansas, Louisiana, South Carolina, Missouri and Arizona – bills of one or both categories remain technically alive, but most are considered unlikely to win final passage. In some cases, the legislatures are in recess and future scheduling is in limbo because of the coronavirus outbreak. 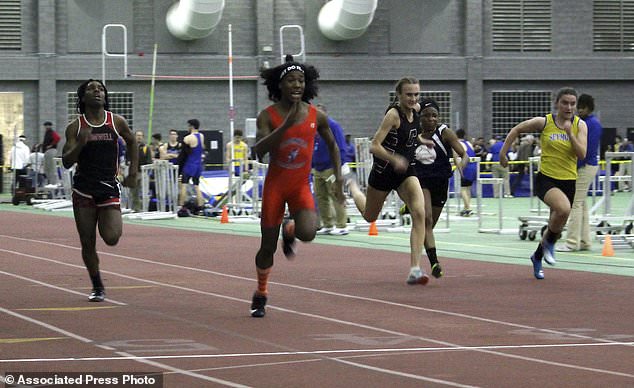 In this 2019 file photo, Bloomfield High School transgender athlete Terry Miller, second from left, wins the final of the 55-meter dash over transgender athlete Andraya Yearwood, far left, and other runners in the Connecticut girls Class S indoor track meet at Hillhouse High School in New Haven. In a response to a lawsuit brought by three female high school runners, the Connecticut Interscholastic Athletic Conference maintains that it is exempt from Title IX, that guarantees equal access to women and girls in education, including athletics. The lawsuit argues that male anatomy gives the trans runners an unfair advantage in violation of Title IX

Meanwhile, the families of three female high school runners have filed a lawsuit in federal court seeking to block transgender athletes in Connecticut from participating in girls’ sports.

On March 24, the US Justice Department came out in support of the lawsuit, arguing that the state’s inclusive policy violates the federal Title IX law allowing girls equal educational and athletic opportunities.

Attorney General William Barr signed what is known as a statement of interest, arguing against the policy of the Connecticut Interscholastic Athletic Conference, the board that oversees the state’s high school athletic competitions. 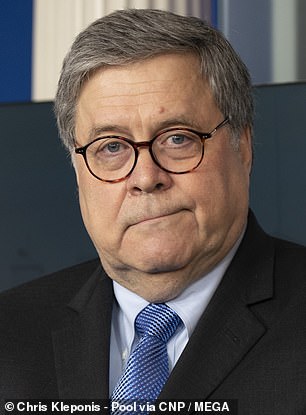 The conference allows athletes to compete as the gender with which they identify, arguing it is following a state law that requires high school students be treated according to their gender identity. It also argues the policy is in accordance with Title IX.

The Justice Department, in its filing, disagrees.

‘Under CIAC’s interpretation of Title IX, however, schools may not account for the real physiological differences between men and women. Instead, schools must have certain biological males – namely, those who publicly identify as female – compete against biological females,’ Barr and the other department officials write. ‘In so doing, CIAC deprives those women of the single-sex athletic competitions that are one of the marquee accomplishments of Title IX.’

The girls’ lawsuit centers on two transgender sprinters, Terry Miller and Andraya Yearwood, who have frequently outperformed their cisgender competitors.

The two seniors have combined to win 15 girls state indoor or outdoor championship races since 2017, according to the lawsuit. 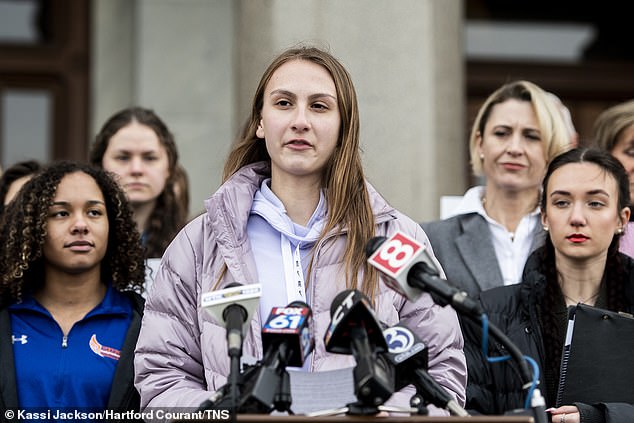 The three plaintiffs have competed directly against them, almost always losing to Miller and usually behind Yearwood. Mitchell finished third in the 2019 state championship in the girls 55-meter indoor track competition behind Miller and Yearwood. 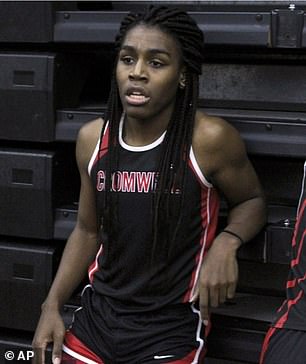 In this February 7, 2019 file photo, Cromwell High School transgender athlete Andraya Yearwood rests after completing a race during a track meet at Hillhouse High School in New Haven, Conn. Yearwood is among Connecticut transgender athletes who would be blocked from participating in girls sports under a federal lawsuit filed in February

Yearwood, of Cromwell High School, and Miller, of Bloomfield High School, have both defended their participation in girls events.

The plaintiffs are arguing that they have been deprived of wins, state titles and athletic opportunities by being forced to compete against transgender athletes.

‘Males will always have inherent physical advantages over comparably talented and trained girls – that’s the reason we have girls sports in the first place,’ their attorney, Christiana Holcomb said Wednesday. ‘And a male’s belief about his gender doesn’t eliminate those advantages.’

Messages seeking comment were left Wednesday with the attorneys representing the the athletic conference, other defendants and the American Civil Liberties Union, which represents the two transgender girls who run track in Connecticut.

The spring track season is on hold because of the COVID-19 pandemic, but conference officials have put off a decision on whether to cancel it.

Holcomb has said because the lawsuit also asks for changes to the state record book, the lawsuit will go forward even if it is not resolved before the seniors graduate. 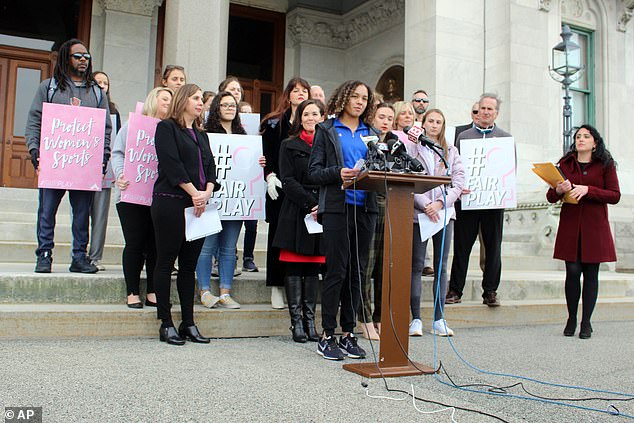