Home » World News » If John Calipari wants to declare Kentucky 'a basketball school,' it's time for him to back it up

If John Calipari wants to declare Kentucky 'a basketball school,' it's time for him to back it up

John Calipari isn’t wrong that the University of Kentucky is a basketball school. That’s what he told the Athletic last week and any suggestion, let alone any huffing and puffing, to the contrary is ridiculous.

That’s not a shot at Mark Stoops’ football program, which this week is ranked in the AP preseason poll for the first time since 1978. Stoops has done excellent work building things up and delivering his second 10-3 season last year.

Yet Kentucky is still a basketball school, one with eight national championships and a heightened level of expectations.

That is exactly why Calipari needs to deliver another national title, which would be his second, to Lexington either this year or next. It appears he will have enough talent to do just that.

Is that an impossibly high barrier to determine success? Of course it is. A couple Final Fours would probably placate the masses. Maybe.

But that’s what makes it a basketball school. Good isn’t good enough. Considering the roster Calipari has to work with and the fact his team hasn’t won a national title in 11 seasons, there should be a desperate urgency around the team. And that’s before you tack on a 9-16 season in 2020-21 and a first-round NCAA exit at the hands of Saint Peter’s last year.

No one knows that more than Calipari, who has never lowered expectations or shied away from the fiercest recruiting battles or tried to minimize the program’s immense history and power. 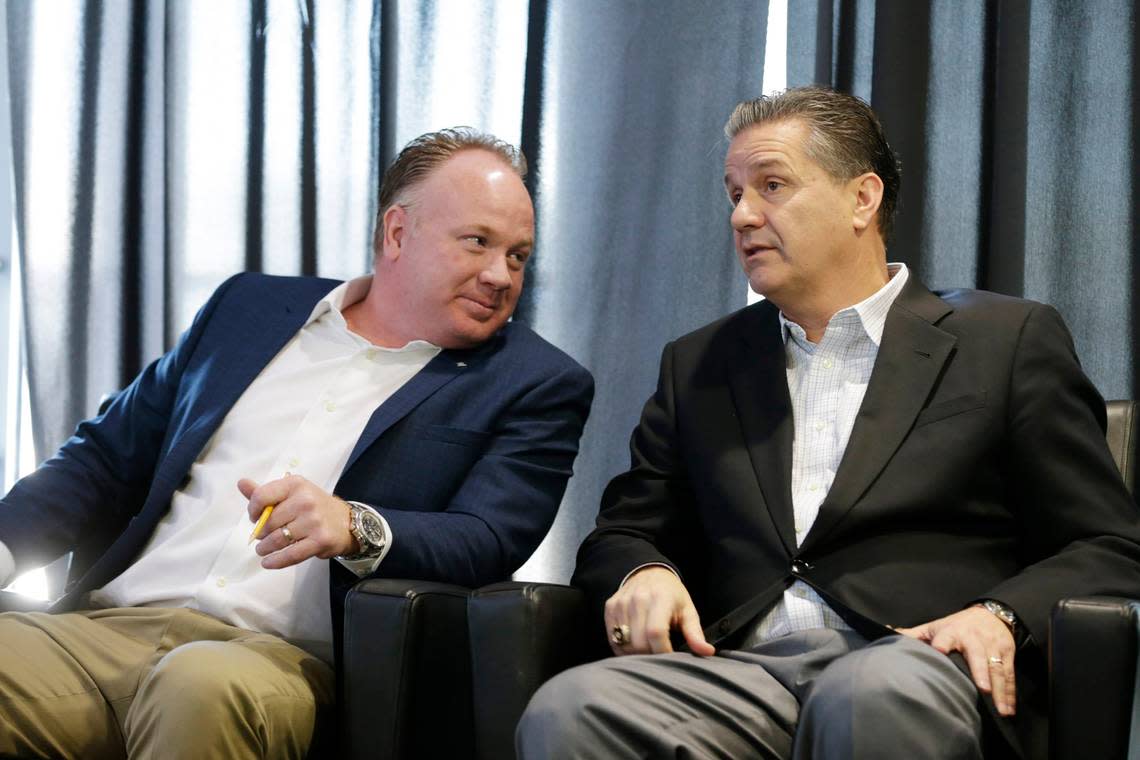 His comments last week about being a basketball school and hoping Kentucky would continue to invest in the program as such — namely in the construction of a new practice facility and museum — were based on that thinking. This sport matters, so the school can’t fall behind other schools where it also matters.

Where things got sideways — either purposefully or clumsily, depending on whether you believe Calipari — came when he brought up the football program.

“This is a basketball school,” Calipari told The Athletic last week. “It’s always been that. “Alabama is a football school. So is Georgia. I mean, they are. No disrespect to our football team. I hope they win 10 games and go to bowls …

“But this is a basketball school,” he continued. “And so we need to keep moving in that direction and keep doing what we’re doing.”

Football coach Mark Stoops took exception to the comments. So did athletic director Mitch Barnhart. That’s fine. Calipari was wrong to compare UK football to any other program. He’s acknowledged that. And passive-aggressive lines like “win 10 games” and thus implying UK football is a second-tier program at best didn’t help his cause. Stoops apparently isn’t returning his calls.

Still, if Barnhart is smart he’ll heed Calipari’s wishes, or at least perspective, no matter how poorly expressed. If Cal feels his program is being ignored, then that’s a problem. If nothing else, this should have been handled — quietly, as Barnhard no doubt prefers — long ago.

“I’m not real thrilled at where we are,” Barnhart said. “Grown-ups are going to have to figure this out and be a little better.”

Oh boy. This probably isn’t just going to get soothed over with a quick staff meeting.

That means Calipari needs to win big this year even more than before. Based on his team’s play during a series of exhibition games last weekend in the Bahamas, he certainly has the players. The Wildcats look deep, long and athletic around Oscar Tshiebwe, the returning national player of the year.

Meanwhile, Calipari has verbal commitments from two top-five players in the Class of 2023, Justin Edwards and Robert Dillingham, and a real shot still with DaJuan Wagner Jr. and Aaron Bradshaw.

You could argue the recruiting success proves Calipari doesn’t need a new practice facility to continue to lure great players to Lexington — Barnhart called the 15-year old Craft Center “state of the art.” It is undoubtedly incredible, but a coach’s job to make sure the program doesn’t fall behind and the facilities arms race is relentless.

Either way, Calipari needs another national title to remind Wildcat fans and administrators what he has brought to the program. No, he didn’t build it like Stoops — who cracked about how his program “didn’t wake up on third base.” But UK had faded during the end of the Tubby Smith era and continued during Billy Gillispie’s two-year stint.

Calipari reinvigorated it and brought a parade of otherworldly talent to town. Should he have another title or two? Sure. The 2014-15 team that started 38-0 might hurt the most. But he’s been good to UK and the standard is not winning mid-level bowl games or padding records on weak non-conference slates.

Stoops should be proud of what he’s done. Kentucky football is legit now and not long ago, that seemed impossible. Calipari should apologize for dragging him into what looks like a coach-administration financing battle.

Then Coach Cal should go prove both what his program and he is about by winning it all. Soon.

That’s how this all gets put to rest. Perhaps the only way.