Brussels: New data relating to the Omicron coronavirus variant on Tuesday confirmed that the strain was circulating in Europe well before South Africa sounded the alarm on November 24.

The Netherlands’ RIVM health institute found Omicron in samples dating from November 19, while Scottish health authorities tracked infections to an event there on November 20, indicating the variant was in community circulation well before the UK shut its borders to southern Africa on November 28. 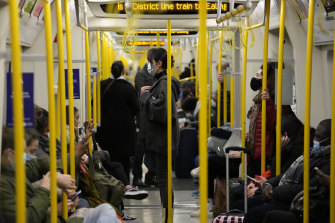 Masks are making a comeback on the London Underground.Credit:AP

Meanwhile, Japan and France reported their first cases of the variant, which has plunged the world back into uncertainty.

It is unclear where or when the variant first emerged and the Dutch and Scottish announcements further muddy the timeline. Previously, the Netherlands had said it found the variant among passengers who came from South Africa on Friday, but the new cases predate that.

Even so, dozens of countries have imposed travel restrictions on visitors from southern Africa – moves both the World Health Organisation (WHO) and the South African government have slammed. 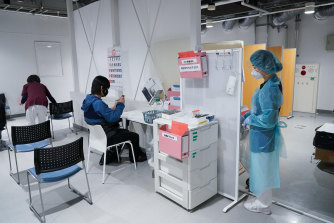 COVID-19 testing and processing at Narita Airport in Tokyo. Japan closed its border, but not before the arrival of the new variant.Credit:Bloomberg

It is increasingly clear that travel bans will not stop the spread of the variant. The Netherlands, Belgium and France have now all reported cases in people who were in their countries before the European Union imposed flight restrictions. Few cases in Europe have been traced directly to southern Africa.

German authorities said they had an Omicron infection in a man who had neither been abroad nor had contact with anyone who had been.

WHO on Monday described the global risk from Omicron as “very high” and that early evidence suggested it could be more contagious than previous variants.

The growing number of cases attributed to Omicron in Botswana and South Africa suggest “a steep rise” could be on the way, Dr Nicksy Gumede-Moeletsi, regional virologist for WHO said on Tuesday.

“There is a possibility that really we’re going to be seeing a serious doubling or tripling of the cases as we move along or as the week unfolds,” Gumede-Moeletsi said. 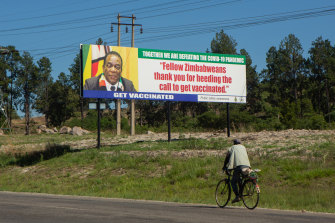 The Zimbabwean government is encouraging citizens to get vaccinated.Credit:Getty Images

After a period of low transmission in South Africa, new cases began to rapidly rise in the middle of November.

Currently, South Africa is logging nearly 3000 new infections per day. That figure is dwarfed by current infections in Europe, which are already averaging 42,000 a day in the UK and 58,000 in Germany – signs that any Omicron spike in Europe could have a significant impact as winter sets in.

The concentration of Omicron cases among university students in the South African capital of Pretoria is a particular cause for concern because that group is very sociable – and will soon be heading for their homes at the end of the year and mixing with friends and family.

Doctors in South Africa are reporting patients with mostly mild symptoms, but many of them are young adults who generally do not get as sick from COVID-19 as older people.

Still, many officials tried to calm fears, insisting vaccines remain the best defence and that the world must redouble its efforts to get shots to every part of the globe.

The response from vaccine manufacturers has been mixed. While all concede it is too early to know for sure, Pfizer boss Ugur Sahin on Tuesday said vaccines were likely to guard against the worst of Omicron, while Moderna executives had earlier cast doubt on their effectiveness.

European Medicines Agency chief, Emer Cooke, insisted that the 27-nation EU was well prepared for the variant. While it is not known how effective current vaccines are against Omicron, Cooke said the shots could be adapted within three or four months if need be.

The latest variant makes vaccination efforts even more important, US Secretary of State Antony Blinken said, noting as many have before that “as long as the virus is replicating somewhere, it could be mutating.”

Governments worldwide have reintroduced measures aimed at mitigating the spread.

England again made face coverings mandatory on public transport and in shops, banks and hairdressers. One month out from Christmas, the head of the UK’s Health Security Agency, Jenny Harries, urged people to avoid socialising.

In China, organisers of the February Winter Games in Beijing were also making contingency plans.

World markets continued to seesaw on every piece of medical news, either worrisome or reassuring.

Global shares mostly slipped on Tuesday as investors cautiously weighed how much damage Omicron may unleash on the economies.

Some analysts think a serious economic downturn will likely be averted because many people have been vaccinated. However, they also think a return to pre-pandemic levels of economic activity, especially in tourism, has been dramatically delayed.

In a world that is already unnerved by the Delta variant, the latest developments have underscored the need for the whole world vaccinated.

“We have vaccination rates in the United States, in Europe of 50, 60, 70 per cent, depending on exactly who you’re counting. And in Africa, it’s more like 14, 15 per cent or less,” Blinken noted.