Infections up but hospitalisations down: Britain’s post-vax hopes

We have made our live coverage of the coronavirus pandemic free for all readers. Please consider supporting our journalism with a subscription.

London: Once maligned in Australia as the horror show of the West’s mismanagement of the coronavirus pandemic, Britain is now providing vital clues about what life post-vaccinations can look like.

Britain enjoys one of the world’s highest vaccination rates, with 88 per cent of the population aged over 16 given their first dose and almost 79 per cent fully jabbed. As a percentage of the whole population this constitutes around 63 per cent.

While debate in Britain is now focussed on whether to vaccinate younger teens and children, as well as to whom any boosters should be administered, Britain’s current vaccination success is one Australia is hoping to emulate, according to Australia’s Chief Medical Officer Professor Paul Kelly. 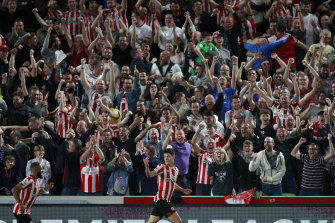 The stadiums of England are full. Credit:AP

“About a month ago, they started to really increase those numbers of cases but … in contrast to previous waves their death rate has remained extremely low,” Professor Kelly told a news conference in Canberra last month.

Late July, Prime Minister Boris Johnson removed all restrictions for those in England, including the obligation to wear a mask which is now only legally required on the underground. (Masks are still required in Scotland and Wales.)

Cases had spiked just days earlier to above 60,000 in a single day after people gathered to watch England’s run in the European Football Championship.

That abated but in recent weeks cases have been steadily building and Britain is recording around 33,000 new infections per day, according to the rolling seven-day average.

The last time infections were at this rate was around December 18, just as the Alpha variant was taking hold pre-vaccinations. Then 19,000 people were in hospital with COVID-19 and the daily death rate, on a rolling average, was 488.

But infections were about to soar over Christmas, and by 18 January 2021, the peak of Britain’s worst wave, some 40,000 hospital beds were occupied by COVID-19 patients and the averaged daily death rate was 1,285.

This week the daily toll over a rolling seven-day average is 106.

But in a warning sign for Australia, which to date has had little to no COVID-19 pressures on hospitals until the Delta outbreak in NSW, the virus has become a permanent fixture in the mix of health concerns the NHS now treats.

This week, the number of people with COVID-19 in hospital breached 7000 for the first time since mid-March.

Paul Hunter, professor of medicine at the Norwich School of Medicine at the University of East Anglia, cautions against Australia taking too much stock from the UK’s experience as it tries to chart what living alongside the virus with an 80 per cent vaccination rate might entail.

“It all depends on how much natural infection the country has experienced to date during the whole pandemic,” he says. 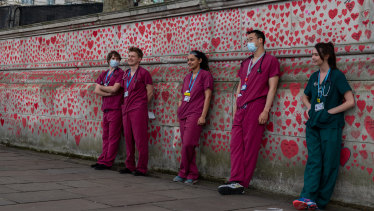 “The UK has seen 99,000 reported infections per million people – and that is an underestimate by three to four fold – but Australia has seen only about 2000 which is probably also an underestimate.

“So if Australia did the same as we have they would see a very rapid increase in cases, hospitalisations and deaths because even with 80 per cent double vaccinated they would have very many more people susceptible than we did on July 19.

“Vaccines are very good at protecting against severe disease but not so good at stopping infection and transmission especially after a few months.”

“Furthermore, the now-prevalent Delta variant is considerably more infectious than previous variants, so people who are not fully immune are more likely to become infected,” says Dr Peter English, a retired consultant in Communicable Disease Control, former editor of Vaccines in Practice and immediate past chair of the BMA’s Public Health Medicine Committee.

While Britons are now more cautious, there is still widespread confidence within the community to travel, attend the theatre and gather in crowds, not just at festivals and gigs but also work conferences. Both Labour and the Conservative parties are going ahead with their party conferences scheduled for the next two months.

But everyone knows the next test is coming. Next week children will return to school and in England, students will not be required to wear masks.

As the temperature drops, the climate is ideal for the virus to find new hosts. What happens in the classrooms with COVID-19 is critical even though children are the least likely to become seriously ill from the virus. 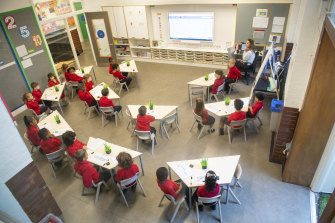 Children on the first day of school at Charles Dickens Primary in London, September 2020. Doctors are braced for a rise in infections when the 2021 school year begins this month.Credit:PA

“They act as vectors, transmitting the disease from household to household,” English says.

This will push the chain of infections up to older and more vulnerable people who are more likely to end up in hospital.

No expert can confidently predict what will happen next but everyone agrees there will be new pressure on the NHS which will not just be coping with COVID-19 this winter, but also the flu and the backlog of medical cases it delayed during the first and second major waves.

“The NHS will survive,” English says. “But many patients who might otherwise have survived will not and the pressure on staff, particularly the moral injury, is likely to have serious effects.

“Staff have already survived one winter, many of them feeling abused and harmed. How many of them will continue if the same happens again?”

But, hospitalisat, infections, up
World News