Home » Inside the underground network smuggling ‘celebrities’ out of Myanmar

Inside the underground network smuggling ‘celebrities’ out of Myanmar

Singapore: It’s post-coup Myanmar’s version of the Underground Railroad, the network of people and routes that in the 19th century helped some African-Americans escape from slavery.

An ad hoc, multi-faceted support system stretching from the cities to the mountains and jungle of Myanmar’s borderlands that has assisted prominent and high-value “targets” of the south-east Asian nation’s military regime flee a reign of terror that has claimed more than 750 lives. 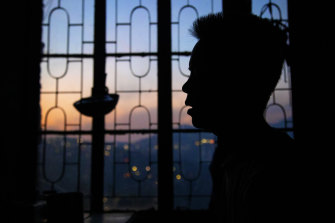 A police officer who fled Myanmar following the military coup is photographed by the AP at undisclosed location bordering Myanmar in March.Credit:AP

That is how it is described by David Eubank, a former US Special Forces soldier and an ordained minister who has run the humanitarian group Free Burma Rangers in Myanmar’s conflict regions for 25 years.

“It’s a multi-day process trying to get people out,” he told The Sydney Morning Herald and The Age. “We’ve got about 25, 26 out and it takes maybe a week, at least for us.

“But we’re just one part of a network. There are many others going in all different directions.“

The American, who has also been on front lines in Iraq, Syria and Sudan war zones over the past decade, insists his organisation is but a small player in these clandestine operations. Its major role is providing aid to those injured or displaced by attacks by the Tatmadaw, as the armed forces are known, in remote areas. He says there are currently approximately 25,000 in hiding in the jungle of northern Karen state near the Thai border. A military ground offensive and air strikes by the military in the region resumed this week after a junta outpost was overrun. 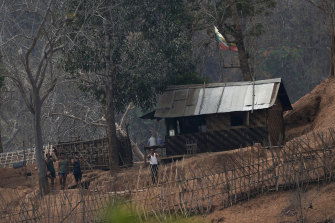 Myanmar soldiers stand at a small army camp along the river bank near the border of Myanmar and Thailand. Ethnic Karen guerillas said they captured the Myanmar army base on Tuesday night.Credit:AP

But with celebrities including actors, singers and social media influencers, as well as politicians from the deposed National League for Democracy, named by state media as being on wanted lists, the group has been active in funnelling some escapees not only out of the cities but out of the country.

“Many thousands have escaped [the cities] on their own. If you’re not named by the government but you’re worried that you might be, you can probably run the gauntlet,” he said.

“But if you’re a top NLD leader or an entertainer or a human rights activist you’re probably on TV already – like in the case of six people we got out, they found out they were in trouble when they watched TV and found they were charged with article 505,” he says. Article 505 of the penal code, a law the junta has invoked widely, deals with the spreading of news to promote instability. 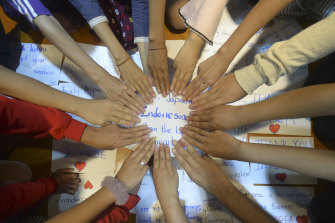 Anti-coup protesters flash the three-finger salute to signify defiance in Yangon, on Monday. They wrote cards thanking other countries for trying to help bring democracy back to Myanmar.Credit:AP

“In their case they thought they’d be arrested, tortured and killed. Getting them out is harder because people know them. They have their faces on TV, there are warrants out for them. Those are the people we are focused on. I’d say over 5000 have fled on their own, through their own networks, to the border. We’re just focused on the ones that can’t do it that way.”

Eubank says foreign embassies have helped high-profile figures flee to other countries but with more to get out he makes it clear he cannot reveal details of how they have escaped.

“But I will say this – it is a large network that was not pre-planned,” he said.

“It is a network of people who care and some of the most surprising people come out of the woodwork saying ‘I’ll do that part, I’ll do this part’. We’re like: ‘you’re a housewife with two kids and you could die doing this’.

“It’s just like if you and I landed in Sydney and somebody took over the country and slaughtered people. We don’t know each other but we’re going to help each other.“

The spokesman for Myanmar’s civilian government in hiding, Dr Sasa, has told of how he disguised himself as a taxi driver and fled the capital Naypyitaw in the days after the February 1 coup. He has since been conducting video interviews with media around the world from an undisclosed location. 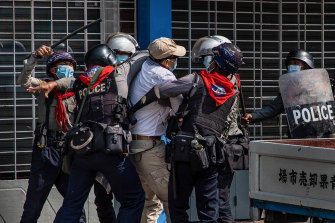 Riot police arrest anti-coup protesters in Myanmar in February. More than 3500 are still in police custody, more than 750 were killed by the military’s crackdown on protesters.Credit:Getty Images

In another instance recalled by Eubank, the Free Burma Rangers were contacted by four people who had hidden in an underground parking lot for two days, telling them they couldn’t leave “because every building is being watched”.

Many haven’t escaped the clutches of the Tatmadaw. According to the Assistance Association for Political Prisoners advocacy group, whose leadership itself is in hiding, there are nearly 3500 people still detained from the post-coup protests. Among them are members of the overthrown democratically elected government such as Aung San Suu Kyi and her Australian economic adviser Sean Turnell and celebrities like Paing Takhon, an actor and model with more than a million followers on Facebook and Instagram who was arrested on April 8.

Leading independent Myanmar analyst David Mathieson said he had been told of examples of high-profile figures being taken in by third countries after escaping to neighbouring Thailand or India.

“The prominent ones will get out basically because there will be countries that will take them in as asylum cases. I’ve heard of a couple of cases where basically there are interventions with authorities and they’re like ‘they don’t have to stay in your country, we can get them out to our country’,” Mathieson said.

“So it’s not putting a burden on the neighbouring countries, on India and Thailand. Because no one is going to China, believe me.”

Others have fled to border areas like in Karen state, in Myanmar’s south-east, and Chin state, in the west, where ethnic forces have no love for the NLD and its ousted leader Suu Kyi but share a common enemy in the military.

“People are going where they know that those organisations and that civil society would actually help them and welcome them and not turn them over to the authorities,” Mathieson said.

The Association of South-east Asian Nations last weekend announced a five-point consensus on Myanmar after a meeting in Jakarta attended by junta leader Senior General Min Aung Hlaing. It included a call for an “immediate cessation of violence” and the visit of an ASEAN special envoy to Myanmar. But with fighting escalating with ethnic groups in border areas, the military’s spokesman said on Tuesday it would consider the “constructive suggestions made by ASEAN leaders when the situation returns to stability in the country”.

Inside, Network, the, underground
World News