Remains of two WW2 airmen who crashed on a secret mission were found 76 years later by a family investigating a blocked septic tank – an hour’s walk away from the wreckage, inquest hears

The remains of two Second World War airmen who crashed on a secret mission were found 76 years later by a family investigating a blocked septic tank, an inquest has heard.

The bodies of RAF pilot Alfred Milne and navigator Eric Stubbs were discovered on a smallholding in the North Yorkshire Moors in March 2020 – about an hour’s walk away from where their plane went down.

An inquest heard the RAF men had been transporting a smaller version of the Barnes Wallis-designed Bouncing Bomb to Scotland when their Mosquito plane crashed in October 1944.

The hearing into their deaths was told their remains were found on land formerly owned by Kenneth Ward, a disgraced military historian and collector, but stopped short of establishing how they had got there. 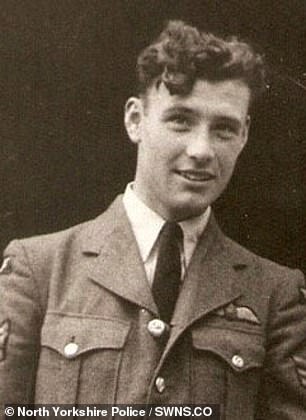 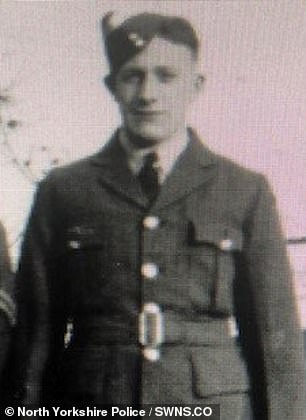 The bodies of Alfred Robert William Milne (left) and Eric Alan Stubbs (right), both 22, were found on a property in North Yorkshire in March 2020 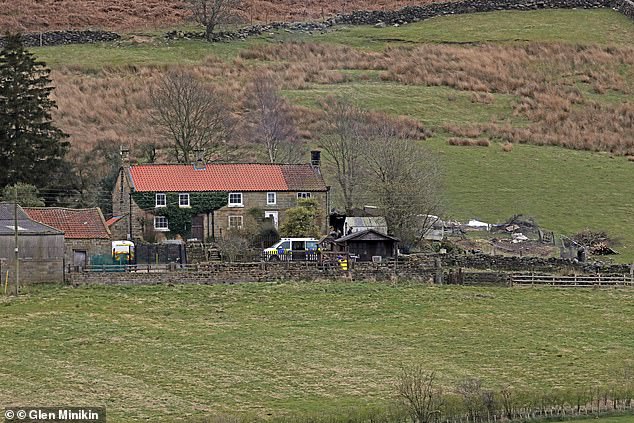 The remote property became the centre of a massive police operation which continued for weeks as a field adjoining the home was excavated in sections in a search for further remains.

At the time the bodies were found in March 2020, Ward had only recently been released from a five year prison term for firearms and explosives offences and for stalking a female neighbour. 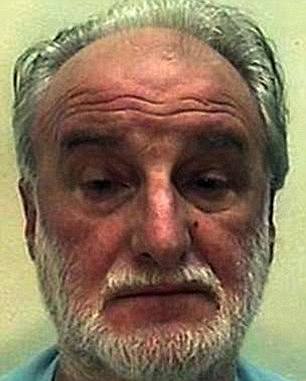 In 2010 police found a huge cache of bombs and live weaponry at his Appletree Hurst Cottage at Chop Gate, including a loaded Luger pistol under his pillow and an aircraft cockpit with functioning loaded guns.

Earlier, Ward had been found to be in possession of a personal item from a deceased pilot.

The MOD confirmed that in 1999 he was given an informal warning over his possession of a pendant believed to have belonged to a Canadian airman who died in a crash in East Yorkshire during the war.

The suspected date of the offence was 1982, before the Protection of Military Remains Act was passed four years later, making it illegal to search wrecks without MOD permission.

Ward is known to have spent much of his life searching for aircraft wrecks and he kept hundreds of items of memorabilia, opening his home as an unofficial museum

He welcomed other enthusiasts and often gave interviews to the aviation trade press in the 1990s and 2000s.

When the remains of Mr Stubbs and Mr Milne were found, Ward was arrested by North Yorkshire Police at his new home in a caravan park at York.

They discovered his caravan was stuffed with military memorabilia, which was also seized.

But despite a protracted investigation centring on how the airmen ended up at Appletree Hurst and whether any other remains were present on the property, no charges were brought.

It meant the relatives of the two 22-year-old pilots will never know how their remains came to be so far away from the spot where their de Havilland Mosquito combat aircraft crashed in Bilsdale in October 1944. 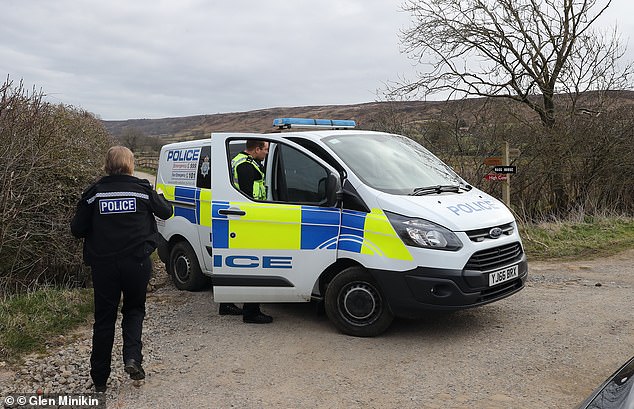 North Yorkshire Police and the Ministry of Defence Police concluded their investigation without any further charges being brought against Ward. Pictured: A police van at the entrance to the remote property

The inquest in Northallerton heard that police were called to the uninhabited cottage after a family who had recently moved into the adjoining property discovered a human jawbone on an open grassed area near a shed in the paddock.

The homeowner who made the find was investigating a blockage in his septic tank when he saw the bone and recognised it to be human as he is a medical professional.

Two lower mandibles were confirmed by forensic archaeologists to date from before 1950, and pre-emptive dental work performed by the RAF on servicemen flying at high altitude was noted in teeth.

There was evidence of impact injuries and discolouration from contact with a helmet or chinstrap and fragments from a harness were found nearby.

It was established that the bones had been moved from the original crash site and had been exposed to the elements for a prolonged period.

Detective Chief Inspector Carol Kirk from North Yorkshire Police and forensic archaeologist Dr Carl Harrison both confirmed that the remains were classed as a ‘secondary deposition’ and had been moved from another place. 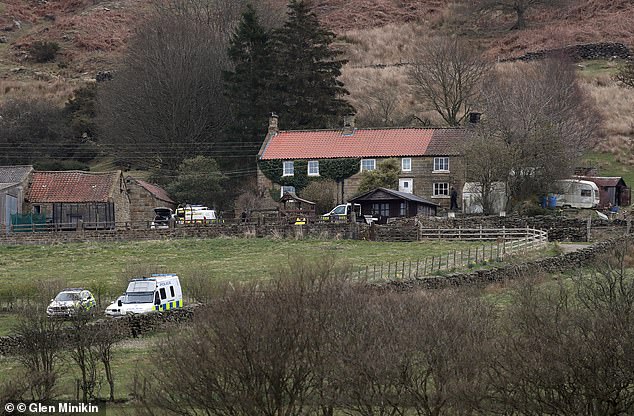 The inquest also heard evidence from a military historian, Richard Allenby, who said he had interviewed the only witness to the Mosquito crash, a farm labourer called Ken Luck.

Mr Luck had heard the plane’s engine spluttering and seen its nose dip before it exploded on impact.

PO Milne and navigator Sgt Stubbs had been on a secret flight from RAF Beccles in Suffolk to Turnberry in Ayrshire when their plane went down.

After it had crashed the bomb rolled from the plane into the orchard of a nearby farm, but did not detonate and was later recovered by the RAF.

Mr Luck’s account contradicted the original assumption that Mr Milne had lost control while flying over high ground in low cloud, and led to North Yorkshire coroner Richard Watson concluding that a mechanical failure or fuel shortage had actually caused the crash.

Afterwards the two men’s bodies were thought to have been recovered and buried – deepening the mystery as to how they ended up on Ward’s land.

Mr Watson said the men’s remains had now been buried in the south of England with full military honours.

‘This is a timely reminder to us all of those young men who made the supreme sacrifice during those difficult times, and it’s a reminder of the cost of war.’

Information was also given about both airmen’s lives. Alfred Milne was born in London in 1921 and worked as a post officer sorter before enlisting in 1941. 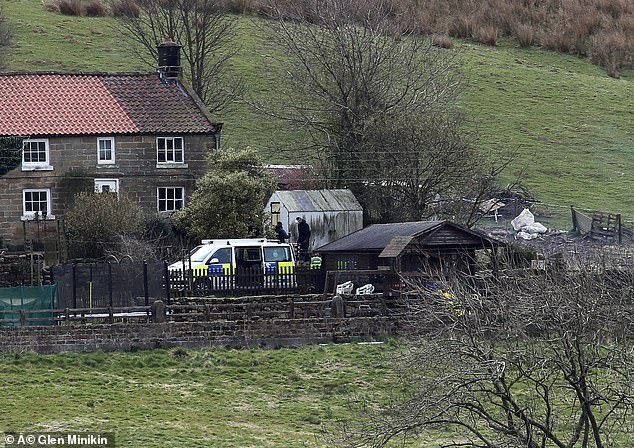 He was posted to Canada and rose through the ranks, eventually commissioning as a pilot officer and marrying his wife just a year before he died.

They had no children, but he was survived by his sister and nephews.

Eric Stubbs, born in 1922 in Guildford, was not married and ‘disappeared’ from his family tree after the war when his sister also died childless.

He worked as a local government clerk before the war.

The inquest was attended by Joan and Nicola Stubbs, who are descended from a cousin.

Kenneth Ward, 75, has always denied any knowledge of how the airmen’s remains ended up at his tumbledown cottage, where he lived alone having survived his mother and brother.

In 2021, a year after his arrest, Ward said: ‘They are no further forward than they were a year ago, except that they’ve wasted a fortune in taxpayer’s money. I was told the investigation has cost up to a million pounds.

‘They were looking for memorabilia they thought was buried in the fields for some reason but they found nothing.

‘They raided my home, took a lot of items away and haven’t returned them. I was forced to move away and my life was turned upside down.’