A PREGNANT mother has suffered second degree burns after falling asleep on top of her iPhone 7.

Melanie Tan Pelaez had her iPhone 7 plugged into the charger and was watching movies from her device when she fell asleep, reports news.com.au. 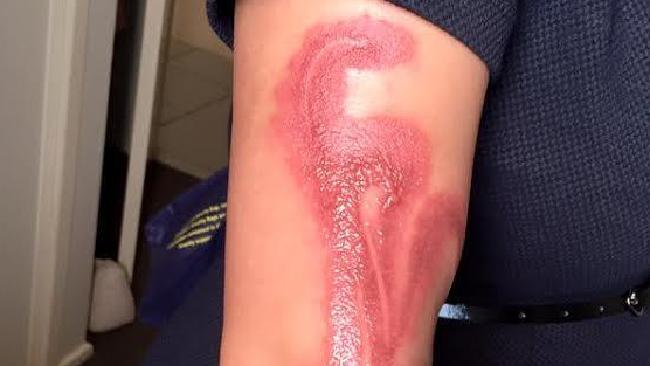 In the morning, she woke up to pins and needles down her arm and knew something was wrong.

“I went to get dressed and realised my arm was very red, so I then went to the GP and they advised me I needed to go straight to the hospital,” she said.

“The hospital did a number of tests and told me the mark was a burn from a foreign object and told me to check around my bed to see what could be the cause of the injury.”

Ms Tan Pelaez said she believed her iPhone 7 was to blame and this was quickly confirmed.

“We matched the markings on my arm to the phone and charger,” she said.

The pregnant mother said she immediately took the phone into the Apple Store to tell them of the incident.

“Apple took my phone and details, but said it couldn’t have been the phone because it didn’t have a distinct smell,” she said. 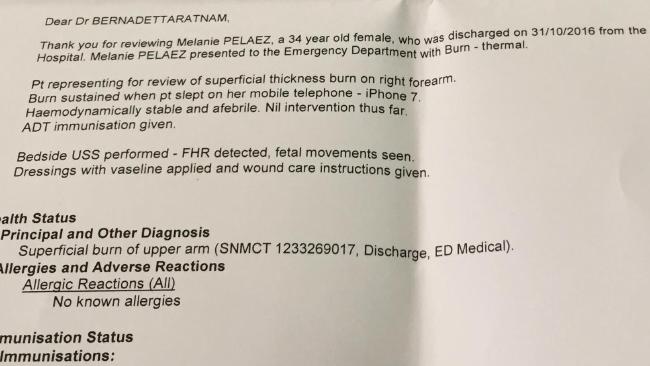 “I then got a call from a member of the executive team who told me they were now handing the matter and had sent the phone to a senior technician in California for testing.”

Ms Tan Pelaez said she since been to the emergency room twice and has had to met with a plastic surgeon to discuss her options for dealing with the scar left on her arm.

“Apple seems to think the phone isn’t to blame as it is designed to shut down, but my injury shows this isn’t the case. I’m just lucky because it could have been a lot worse,” she said.

“I just want to create awareness to show people how careful you have to be.”

Ms Tan Pelaez said she has been offered a new iPhone 7 from Apple, but that is all that has come from the tech giant.

“I declined the offer for a replacement phone because I don’t trust the device anymore,” she said.

“I just want to raise awareness so people don’t have to suffer the same injury as I did.”

Apple is working with Ms Tan Pelaez to investigate the matter.