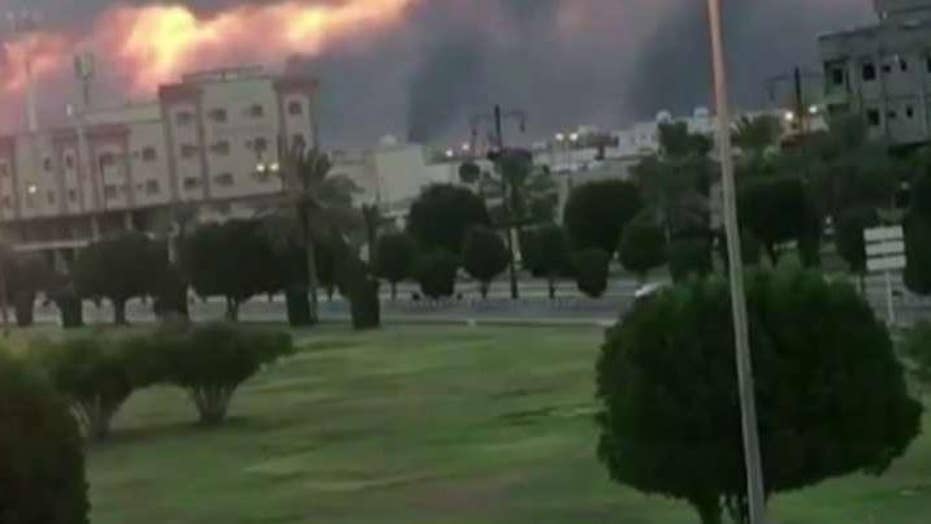 Hudson Institute senior fellow Michael Pregent says he believes without a doubt that Iran was involved in the attacks on Saudi oil facilities.

Iran on Monday reportedly seized a vessel in the Persian Gulf for allegedly smuggling diesel to the United Arab Emirates — a close ally of Saudi Arabia — amid the ratcheting up of regional tensions after a group of Iranian-backed rebels said they were responsible for the attack on a Saudi oil facility over the weekend.

The vessel seized Monday morning was carrying 250,000 liters of fuel when it was intercepted by Iran's Revolutionary Guard Corps, according to the Islamic Republic's semi-official Iranian Students' News Agency.

“It was detained near Iran’s Greater Tunb island in the Persian Gulf…the crew have been handed over to legal authorities in the southern Hormozgan province,” ISNA reported, according to Reuters. The nationalities of those aboard the vessel were not immediately clear.

The reported ship seizure comes after Yemen's Houthi rebels allegedly orchestrated the weekend drone assault on the world's largest oil processing facility in Saudia Arabia. The attack, which halved the kingdom's oil production and sent crude prices soaring, led President Trump to authorize the release of U.S. strategic reserves should they be necessary to stabilize the market.

WSJ: Saudi Arabia slashing nearly half of its oil output after strikes on facilities

Trump on Sunday suggested the U.S. knew who was responsible for the attack, and vowed America was "locked and loaded depending on verification."

While he did not specify who he believed was responsible for Saturday's drone attacks, U.S. investigators previously have pointed the finger at Iran.

"Saudi Arabia oil supply was attacked. There is reason to believe that we know the culprit, are locked and loaded depending on verification, but are waiting to hear from the Kingdom as to who they believe was the cause of this attack, and under what terms we would proceed!" the president tweeted.

The U.S. government produced satellite photos showing what officials said were at least 19 points of impact at two Saudi energy facilities, including damage at the heart of the kingdom's crucial oil processing plant at Abqaiq. Officials said the photos show impacts consistent with the attack coming from the direction of Iran or Iraq, rather than from Yemen to the south.

Iraq denied that its territory was used for an attack on the kingdom. U.S. officials said a strike from there would be a violation of Iraq's sovereignty.

The attacks and recriminations are increasing already heightened fears of an escalation in the region, after Sen. Lindsey Graham, R-S.C.,  suggested striking Iranian oil refineries in response to the assault, and Iran warned of the potential of more violence.

Fox News' Bradford Betz and The Associated Press contributed to this report.