The plot, which the corps described as a “major” sabotage attempt against an Iranian nuclear facility, was intended to be carried out before March 21, the Persian New Year or Nowruz. The operation involved an employee at Fordow cooperating with Israeli intelligence officers in exchange for cash and digital currency, according to IRNA. 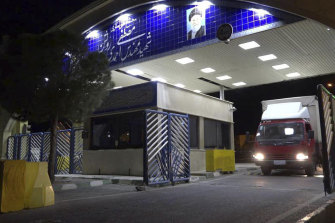 Iran’s nuclear program has weathered a number of attacks over the years, including the assassination of one of its top nuclear scientists and an explosion near the Natanz enrichment facility. More recently, Iran claimed that international surveillance cameras in its Karaj nuclear facility had been hacked. Iranian officials have blamed Israel for these incidents.

Iranian state television earlier reported the “Zionist regime” — a Tehran reference meaning Israel — has for years been trying to hit Fordow unsuccessfully. The report on Monday (Tuesday AED) did not say how many suspects were arrested, what their nationalities were or when and where the arrests supposedly took place. 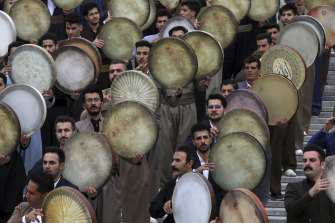 Musicians from the Kurdish western region of Iran play Daf, a hand-held Persian drum, in a ceremony ahead of the Iranian New Year, or Nowruz, at a park in Tehran, Iran, on Monday.Credit:AP

Iran has recently stopped the International Atomic Energy Agency from accessing its surveillance camera footage and has resumed enrichment of uranium at the facility.

Iran however, has said it would keep the surveillance footage and hand it over to the IAEA if and when it’s granted sanctions relief.

Iranian authorities regularly report claims of dismantling spy and other networks seeking to harm Iran, but seldom offer any evidence.

The report came as months-long negotiations in Vienna aimed at restoring Iran’s tattered nuclear deal with world powers went on what their European hosts described as “a pause” after Russia demanded relief from sanctions targeting it over its war on Ukraine. Iran claimed the pause was because of new US demands.

The talks were seeking to draw a roadmap for how the US could rejoin the accord it unilaterally withdrew from in 2018, and how Iran would again limit its rapidly advancing nuclear program.

In April last year, Iran’s underground Natanz nuclear facility experienced a mysterious blackout that damaged some of its centrifuges. In 2020, unexplained fires struck the advanced centrifuge assembly plant at Natanz, which authorities later described as sabotage. Iran is now rebuilding that facility deep inside a nearby mountain.

Israel is widely believed to have carried out the Natanz sabotage, though it has not claimed it. Iran also blamed Israel for the November killing of a scientist who began the country’s military nuclear program decades earlier.