Istanbul: Iran will take another step away from a 2015 nuclear deal by starting to develop centrifuges to speed up its uranium enrichment, President Hassan Rouhani has declared.

He also gave European powers two more months to try to save the multilateral pact negotiated under the US administration of former president Barack Obama.

Rouhani made the announcement in a televised address and said the change would go into motion at the end of the week.

"All limitations on our Research and Development will be lifted on Friday," he said. 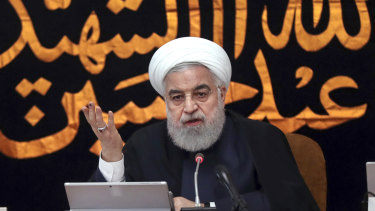 “From Friday, we will witness research and development on different kinds of centrifuges and new centrifuges and also whatever is needed for enriching uranium in an accelerated way,” Iranian President Hassan Rouhani said. Credit:AP

Under the nuclear pact it struck with world powers in 2015, Iran was allowed limited research and development on advanced centrifuges, which accelerate the production of material that could be used to make a nuclear bomb.

On Wednesday, Tehran time, Rouhani said Iran's Atomic Energy Organisation would "immediately start research and development on whatever technical needs the country has and will set aside all the commitments stipulated" under the nuclear deal, according to Iranian state media.

"We will witness research and development on different kinds of centrifuges . . . and whatever is needed for enriching uranium at a faster pace," he continued, adding that the activities would be supervised by the International Atomic Energy Agency, the United Nations' nuclear watchdog.

Iran's steps are part of an effort to persuade European nations to reset the terms of the deal after the United States' withdrawal from it last year. The Trump administration reimposed harsh sanctions on Iran in the fall.

Iran has said it will reduce its commitments under the agreement every 60 days until Europe can negotiate improved economic terms and offset the effects of the US embargo. 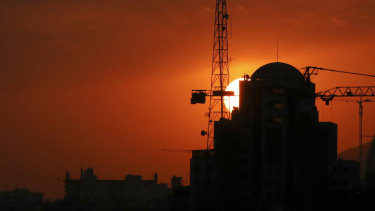 Buildings under construction are silhouetted against the setting sun in Tehran. Iran has threatened to increase its uranium enrichment above levels permitted by the 2015 accord.Credit:AP

Separately on Wednesday, the United States refused to ease its economic sanctions on Iran, imposed fresh ones designed to choke off the smuggling of Iranian oil and rebuffed, but did not rule out, a French plan to give Tehran a $US15 billion ($22 billion) credit line. The money would compensate for lost oil revenue but would depend on a guarantee from the Trump administration not to block the money.

The moves suggested Iran, the United States and the major European powers may be leaving the door open for diplomacy to try resolve the dispute over Iran's nuclear program even as they largely stuck to entrenched positions.

French President Emmanuel Macron is leading the effort to offer Rouhani the bailout package in exchange for its full compliance with the nuclear agreement, diplomats said.

"Our return to the full implementation of the nuclear accord is subject to the receipt of $US15 billion over a four-month period, otherwise the process of reducing Iran's commitments will continue," Iranian state television quoted Deputy Foreign Minister Abbas Araghchi as saying.

"Either Europe has to buy oil from Iran or provide Iran with the equivalent of selling oil as a credit line guaranteed by Iran's oil revenue," Araghchi said.

As part of the 2015 nuclear deal, Iran agreed to significant restrictions on its atomic energy program in return for widespread sanctions relief.

The accord states that Iran agrees to "certain limitations on specific research and development (R&D) activities for the first 8 years," after which it will gradually move to the next stage of its enrichment activities. It also says Iran will "continue to conduct enrichment R&D in a manner that does not accumulate enriched uranium."

The move on Wednesday could raise tensions with the US, which has pushed a "maximum-pressure campaign" that it says will persuade Iran to strike a grand bargain on issues such as its nuclear program, ballistic missiles, and support for proxy forces in the region.

Sixteen more members of the crew would remain onboard, a statement from Stena Bulk, which owns the tanker, said, to satisfy a regulation requiring a minimum number of crew members to safely operate the vessel.